Store Page
Arma 3 >  Workshop > ASmallDinosaur's Workshop
This item has been removed from the community because it violates Steam Community & Content Guidelines. It is only visible to you. If you believe your item has been removed by mistake, please contact Steam Support.
This item is incompatible with Arma 3. Please see the instructions page for reasons why this item might not work within Arma 3.
Current visibility: Hidden
This item will only be visible to you, admins, and anyone marked as a creator.
Current visibility: Friends-only
This item will only be visible in searches to you, your friends, and admins. 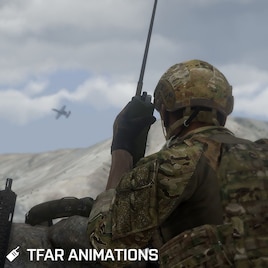 Scotty
Offline
See all 2178 collections (some may be hidden)

This item has been added to your Subscriptions. Some games will require you to relaunch them before the item will be downloaded.
Description
Link to:ACRE Version

I don't personally use TFAR and haven't done much testing, so you may encounter bugs, or this mod may break due to updates without me noticing it. If that happens, leave a comment and I'll do my best to fix it.

This mod should be compatible with both the Beta and non-beta releases of TFAR.

This mod plays one of three animations while the player is using a radio. The mod also adds a new handset model which is by default, used by the larger, backpack-carried radios.

The animations include a headset animation, a vest mounted radio/push-to-talk animation, and holding the handset/radio in your hand.

The mod will choose which animation to play based on whether the user has a vest with a radio, an earpiece, or otherwise. (This can be configured)

Mod Compatibility
If you run this mod with RHSUSAF, the AN/PRC-152 model from RHS will be used.

Plug
TheSpeshalPlatoon is currently recruiting! If you're looking for an ArmA group that isn't "Milsim" but still puts a emphasis on teamwork and coordination, I encourage you to check us out.

Additionally, we develop in-house mods for our group, just like this one!

Cabana Sep 24 @ 12:39pm
Just wondering if my star wars unit could repack this into our Aux mod? Thanks in advance!

WillKMJ Jun 14 @ 9:05am
Try uninstalling the mod and deleting all files then reinstalling my drillas

ASmallDinosaur  [author] Jun 14 @ 8:24am
Can't replicate the key issue with my server, windows server 2016, ArmA3Server from Steam and @CBA_A3;@TFAR Animations; from Steam workshop. V2 signatures and BattleEye enabled. Are you guys obtaining TFAR Animations from this Workshop page or some sort of server manager?

HomelessMage Jun 14 @ 7:12am
It's on your side, you didn't update the .bikey for new addons.
Replacing the key didn't help. Removing the mod.

ASmallDinosaur  [author] Jun 13 @ 8:05pm
you have to replace the mod and the .bikey on your server

Brajko Jun 13 @ 1:13pm
Can't Load this mod since the update on my private server, it's about the key

WillKMJ Jun 13 @ 11:34am
mans really popping off with the mods recently huh