Store Page
Total War: ATTILA>  Workshop > Athanasios95gr's Workshop
This item has been removed from the community because it violates Steam Community & Content Guidelines. It is only visible to you. If you believe your item has been removed by mistake, please contact Steam Support.
This item is incompatible with Total War: ATTILA. Please see the instructions page for reasons why this item might not work within Total War: ATTILA.
Current visibility: Hidden
This item will only be visible to you, admins, and anyone marked as a creator.
Current visibility: Friends-only
This item will only be visible in searches to you, your friends, and admins. 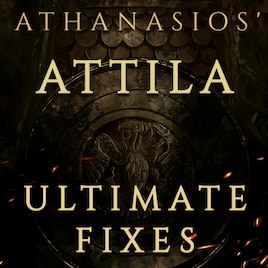 Athanasios95gr
Offline
See all 45 collections (some may be hidden)

This item has been added to your Subscriptions. Some games will require you to relaunch them before the item will be downloaded.
Description
ALL NEW UPDATES: https://steamcommunity.com/workshop/filedetails/discussion/1999136521/2146469347101879439/

Misc. fixes
1) Fixed the Hull Strength bonus of the Carpenter building: correctly applied as an equipment upgrade (the building must be in a port City)
2) Fixed tne missing seasonal effects of Insulae Orientalis and Insulae Occidentalis
3) Fixed the campaign's lighting (this fix will not cause any bugs to the Marib Dam)
4) Fixed the experience rank bonus of ancillaries not being applied

Unit upgrades fixes
1) Fixed the upgrade paths for many units (this bug affects upgrade paths that include 3 or more units and essentially when the level 2 unit could upgrade to level 3, the level 1 wouldn't, and that cause the level 3 unit not being able to be recruited from the appropriate building or prevented the player from upgrading a level 1 unit that wasn't upgraded to level 2) including the upgrade paths of: Alani Mounted Bows, Alani Cavalry Warrios, Alani Shock Cavalry, Sarmatian Skirmishers, Zafar Sentinels, Ras Guard, Celtic Cavalry Raiders, Gazehounds, King's Radif, Mavia's Bodyguards, Mounted Archers (Age of Charlemagne),
2) Sarmatian Skirmishers now upgrade to Alani Cavalry Raiders, then to Alani Mounted Sword Raiders and then to Alani Chosen Raiders
3) Equites Dalmatae now upgrade to Equites Promoti with the technology "Eastern Heavy Cavalry Tactics"
4) Salian Frankish Lancers upgrade to Frankish Lancers with the technology "Organized Armour Production" (TLR DLC)
5) Suebi Warriors now upgrade to Suebi Champions with the technology "Weapon Mastery"

Startpos changes
1) Arria Flaccila is now correctly the new born legitimate daugther of Arcadius and Aelia Eudoxia, as she was historically
2) Fixed the missing factions: Axum Separatists, Himyar Separatists
3) Visigothic religion corrected to Arian Christianity
4) 1 unit of Palatina added to Stilicho's army and 1 unit of Palatina to the army stationed in Constantinople
5) Vandals no longer at war with the Alamans
6) Fixed initial Axum and Himyar bodyguards

Auriman Apr 14 @ 12:26am
I ment the Last Roman campaign, mixed it with the Last Kingdom in my head for some sort of reason :D

Athanasios95gr  [author] Apr 13 @ 7:59am
I am trying to fix this one for almost a year. Nothing worked yet. I am getting closer though.

Auriman Apr 13 @ 6:30am
I think there is main game map color bug, in Last Kingdom campaign in North Africa's Thagaste city region where the the map owner color does not change but stays "rebel color"

the_legionnaire Apr 11 @ 10:21am
hey athanasios, i found some textures bugs with the scholae gentiles unit, i have the screenshots