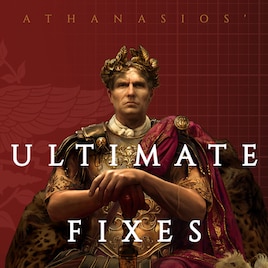 Athanasios95gr
Offline
See all 102 collections (some may be hidden)

This item has been added to your Subscriptions. Some games will require you to relaunch them before the item will be downloaded.
Description
The ULTIMATE BUG FIXING MOD FOR ROME II
Read the entire list of changes: https://steamcommunity.com/workshop/filedetails/discussion/1962928608/3105763714519165228/

Notes : Usage with large mods and "overhauls" is not recommended and will not work but graphical enhancements, reskins and small mods are compatible.

Athanasios' Ultimate Fixes StartposFree:
(a version without startpos fixes, in order to be compatible with tpy, faction unlockers or other mods that have a startpos file)

markus.stretz Apr 12 @ 6:04pm
Your mod and "Faction UI Overhaul" (https://steamcommunity.com/sharedfiles/filedetails/?id=1414968360) seem to be incompatible with each other since the last updates. Any chance you could look into this?

Ragnar Apr 12 @ 2:40am
Even with the Greeks, when you own a whole province it doesn’t always pay off to have the Farming Settlement because of the presence of ports and resources and the Province Capital income. However it makes sense when you only have one or two minor settlements in a province and you specialise into farming.

It’s even worse at the province level because there’s often a port or two or a resource settlement.

Ragnar Apr 12 @ 2:00am
The romans and Eastern settlements also have trade or agricultural so it is only the barbarians that have it different.

Athanasios95gr  [author] Apr 11 @ 4:36pm
By the way the +10% from agriculture/trade/industry applies to the whole province

Quite some time ago I had wondered about the greek settlement too and I thought that agriculture and trade income should change to subsistence for a more balanced result. So I guess there are two ways to solve the issue

We have to think about it a little
< >