Store Page
Divinity: Original Sin 2>  Workshop > Feenex's Workshop
This item has been removed from the community because it violates Steam Community & Content Guidelines. It is only visible to you. If you believe your item has been removed by mistake, please contact Steam Support.
This item is incompatible with Divinity: Original Sin 2. Please see the instructions page for reasons why this item might not work within Divinity: Original Sin 2.
Current visibility: Hidden
This item will only be visible to you, admins, and anyone marked as a creator.
Current visibility: Friends-only
This item will only be visible in searches to you, your friends, and admins. 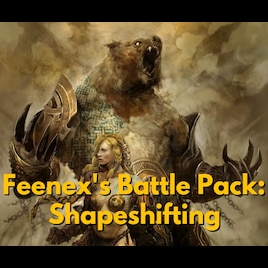 This item has been added to your Subscriptions. Some games will require you to relaunch them before the item will be downloaded.
In 1 collection by Feenex
Feenex's Mods

This mod is an expansion to Feenex's Battle Pack: Definitive Edition, which adds loads of new skills, features, and unique items for even more customization options! This mod creates shapeshifting spells for the polymorph school, allowing you to change into different creature forms, each with its own skills and statistics!

WARNING: This mod works through intense scripting and by changing character templates. Many redundancies have been coded in, and many individuals have playtested this for bugs across many hours. That being said, anything can happen. Save often!

WARNING: This mod is NOT compatible with Shapeshifting: Definitive Edition. All support has been moved to this mod only.

This Expansion adds 150+ new skills to the game, with custom effects! Additionally, it introduces a few new mechanics, such as Transmogrify, Polymorphic, and Ballistic.

I love both the Divinity: OS games and Larian. It's because of my likeness for these games that I decided to dive into the world of modding, and D:OS has been my first modding experience. It was a massive undertaking, but through gruelingly long hours and with the help of a WONDERFUL modding community I took my first steps into learning. My first major project was Shapeshifting: Definitive Edition and although I loved the mod, I was relatively new - which shows in its overall quality. Over a few years, I've developed many more skills and learned much more of the Divinity Engine. Because of this, I decided to massively overhaul my first mod, from scratch, in hopes of creating the mod I originally set out to. Although nothing can never be perfect, I'm very proud to preset Feenex's Battle Pack: Shapeshifting. I hope you all enjoy playing this mod as much as I did creating it. Good luck chasing divinity, friends!
Popular Discussions View All (3)

AnOverweightLoser Sep 26, 2021 @ 5:31pm
I love this mod but im trying to run it with other mods but the models and icons for some of the spells dont show up, total noobquestion i know but how do i fix this?

Tyler Sep 26, 2021 @ 4:16am
Is there any way to obtain the Werewolf Shapeshift after saving Gareth? I got the mod after getting to Driftwood so if there's any way to get it there how would I do so?

untowards Sep 15, 2021 @ 5:28am
mechanics question: does anybody know how to "cleanse" a morphed form on an enemy in combat? For example, an enemy turns into a troll, is there a way I can "chicken form" them or remove their shapeshifted form? there's a spell called cyclone in another mod that cleanses their form, but I was hoping there was another.

0ferret Sep 5, 2021 @ 2:58am
Damage is too low and skills cannot be mixed, so you will not be able to use them.
No matter how hard I think about it, it's not easy to play games with up to six skills.