Greenlight > Games > Mr Kristr's Workshop
Greenlight is being retired. For more information on how to submit games to steam, refer to this blog post.
This item has been removed from the community because it violates Steam Community & Content Guidelines. It is only visible to you. If you believe your item has been removed by mistake, please contact Steam Support.
This item is incompatible with Greenlight. Please see the instructions page for reasons why this item might not work within Greenlight.
Current visibility: Hidden
This item will only be visible to you, admins, and anyone marked as a creator.
Current visibility: Friends-only
This item will only be visible in searches to you, your friends, and admins.
1993 - Space machine
Description Discussions2 Announcements13 Comments122

ThatGunnar
Offline
See all 8 collections (some may be hidden)

That's the date to remember. This time we won't postpone it anymore since the game is basically done.
The date has also been communicated outwards to the press so we can't turn back now.

It's super exciting off course, but I know at the same time that'll be a bit sad once it's all over. After all, we have lived with this project constantly in our heads for a few years now. Always pondering how to make it better and better. It's been a truly joyful process and much kudos to the excellent programmers Markus Ward and Patrik Andersson for making retro action magic of the highest caliber.

I personally think the game packs a solid punch and offers plenty to explore. Those into this genre will be pleased, that's my belief at least. 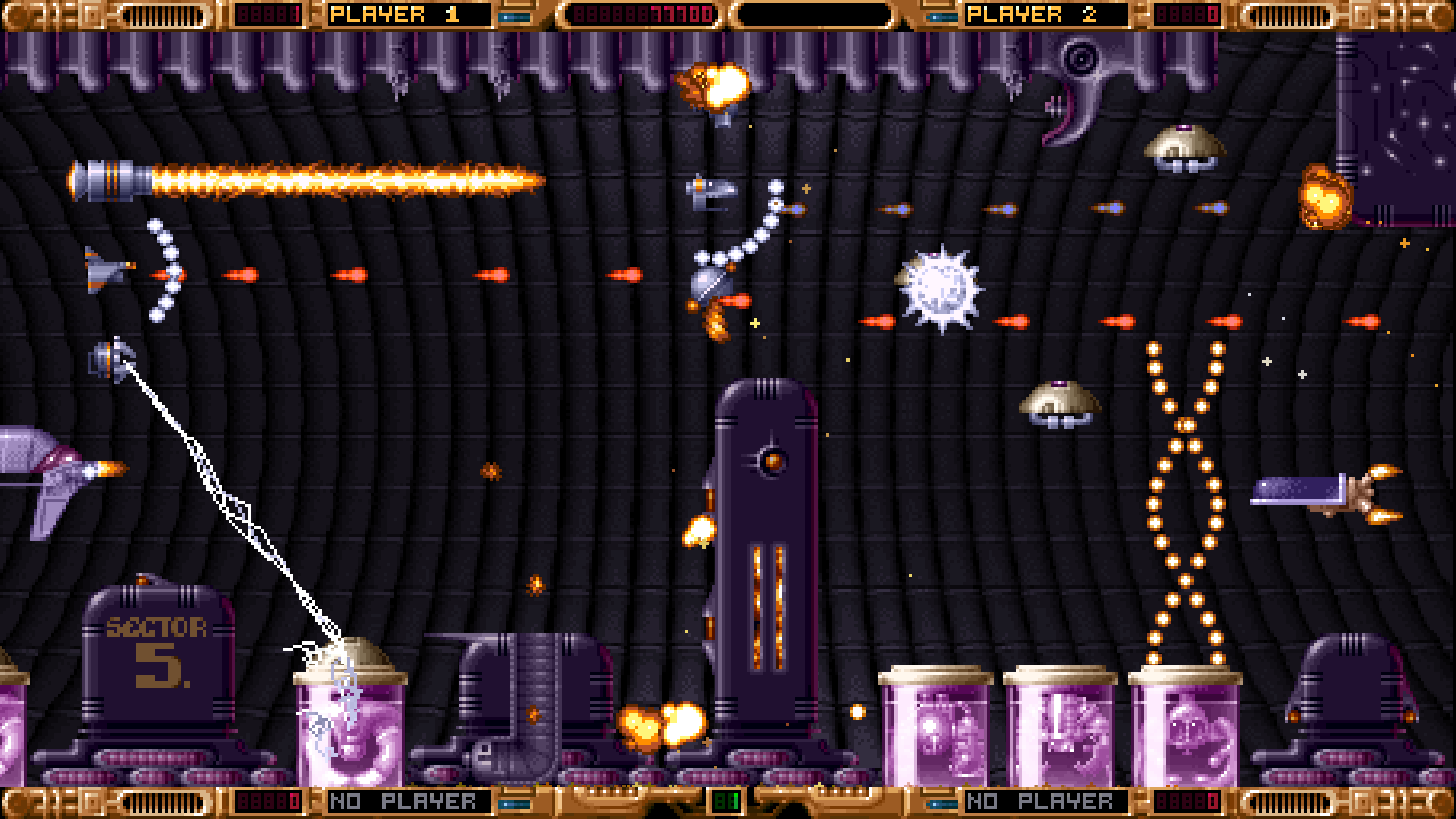 We're just going to smooth over the fact that we postponed the game release once more, with the more exciting fact that we have started to add some really interesting weaponry.
This process is really fun and we think it'll make a big difference to the game. In this image here you see the Inferno flamethrower that's almost like a giant sword that burns the hideous enemies. Below it is the very useful electrocuter that will sense the enemies within a certain radius. That's just two of them.

[imgur.com]
The game play is straight on - action packed shoot 'em up filled with shiny metal gear to grab and explore. Here's what's in store:
-12 Ships to choose from
-25 Different weapons
-3 Power levels for each of them
-13 Levels
-9 Different Boss types

[imgur.com]
Started in the age of the Amiga 500, this game was featured in Amiga format and Commodore User - two of the largest gaming magazines of the time. A series of unfortunate events prevented this space shooter to get finished. We plan to do that now!

[imgur.com]
Towards the end of the interstellar wars, chaos spread and one band of elite mercenaries acted more like pirates and looters than actual soldiers. The leader of this group was the notorious and infamous Colonel Nestor.

Without a doubt the biggest prize of their looting campaigns was the Spacemachine: a device designed to terraform barren planets and making them habitable. With this device, and the rest of their treasure, Nestor and his men started to build an army that now poses a great threat to the known star systems.

Mission: Bring back the Space Machine.

We'll release it on March 28. We know this now because it's basically done.

Mr Kristr  [author] Aug 3, 2015 @ 2:30am
I think we've relied on our blog too much for news about the project. If you want to can check out the blog here www.1993game.com
We'll start giving more frequent updates here on Steam as well. Thank for checking in, we sure apprecaite it!

otty Sep 20, 2014 @ 1:00am
I just had the opportunity to play a demo of the game at the Zürich Games Festival. The game-controls feel really tight and the game looks super-retro, but in an honest way, since they were made over 20 years ago. I'd buy this right now!

1993 - Space machine has been Greenlit and is now listed in the Steam store. For the latest information, purchase options, and discussions for 1993 - Space machine, please see it on the Steam Store or in the Steam Community.
Visit Store Page
For more details Visit Community Hub
For latest discussions
If you really, really want to, you can continue to the Greenlight page. Information on this page may be out of date, since all the action has moved to the areas noted above.