Store Page
Space Engineers>  Workshop > Zkillerproxy's Workshop
This item has been removed from the community because it violates Steam Community & Content Guidelines. It is only visible to you. If you believe your item has been removed by mistake, please contact Steam Support.
This item is incompatible with Space Engineers. Please see the instructions page for reasons why this item might not work within Space Engineers.
Current visibility: Hidden
This item will only be visible to you, admins, and anyone marked as a creator.
Current visibility: Friends-only
This item will only be visible in searches to you, your friends, and admins. 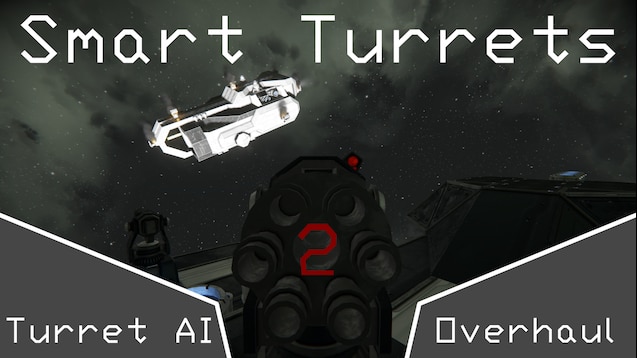 xirathonxbox
Online
See all 1179 collections (some may be hidden)

This item has been added to your Subscriptions. Some games will require you to relaunch them before the item will be downloaded.
Description
A complete rewrite of my Smart Turrets mod, Smart Turrets 2 is a turret AI overall that give you an excessive amount of control over exactly what your turrets are shooting at.

So What EXACTLY Does It Do…
Smart Turrets 2 add a plethora of new controls to all turrets, vanilla and modded alike. These controls allow you to use a completely custom turret AI that is far more configurable then Keens vanilla turret AI, simple :) (Not actually simple at all, this mod was quite a large undertaking and has been about a year in the making).

So How Do I Do The Thing?!?
Well, since it’s quite complicated, here is an enormous image that explains how all the controls work, it should provide you with almost all the information you need to use the new turret controls.

What About Decoys?
Although it might seem at first like this mod makes decoys irrelevant, there are still quite useful. Decoys are targeted as if they where the highest priority block type, using the default settings shown in the image above.

Does It Work In Multiplayer?
Yes it does, it should work fine in multiplayer and on dedicated servers ;)

Saving Things To My Storage Directory, What Does That Mean?
Space Engineers has a folder in the same place as all your world saves for mods to put things. That’s where the mod will save your presets, meaning they will be available to you across all your worlds and on any server running this mod.

Performance Notes
This mod needs to do a lot of math to find targets, although it is significantly more performance friendly then it’s predecessor it can still generate some lag if you have a stupid number of turrets near enormous hostile grids. You have been warned :P

Bugs/Crashes and Known Issues
This mod is immensely complicated and as such, despite rigorous testing, there is almost certainly the odd bug or crash still lurking around. If anything does go wrong, please pop a message in the appropriate discussion below.

There are two known issues with this mod currently:

1. I’ve had to disabled targeting of players, spiders/wolves and meteors due to some issues with Keens turret aiming and shooting code, I can’t do much about it without writing my own code for aiming and shooting turrets, so I don’t know when I’ll fix it if at all. I don’t really see much reason to fix it as players and meteors are often best dealt with using different turrets then you use for shooting ships, so there is no reason I can think of not to use vanilla targeting for that.

2. Sometimes turrets aim really slowly and jerkily, it happens at random and fixes itself at random, I’ve seen it happen with and without Smart Targeting enabled. Not sure what’s causing it or how to fix it.
Popular Discussions View All (5)

Aggressor May 15 @ 4:38pm
Smart turrets dont shoot at spiders for example. So they are not so smart than.

ignis Apr 19 @ 3:17am
The "smart targeting" is visible only the rocket turrets.

ignis Apr 18 @ 7:00am
Many times the "smart targeting" option is not visible. (reload save, reload game, readd mod not helped)

Stefan Apr 14 @ 6:39am
used to work for me, then randomly stopped working for me, no option to have 'smart' enabled anymore

Zé Brasa Mar 2 @ 5:47am
I can't add this script to a programmable block, It doesn't show up

Unruly Feb 28 @ 4:33pm
Thanks for the mod. Would it be hard to please break out 'thruster' from functional block? I realise it's included in functional block, but ticking that results in too much other useful stuff getting wrecked.

[ES]-CiberX15 Feb 3 @ 8:36am
Not seeing the crashes but I am seeing what dnjuandmrk was, where the options aren't appearing at all. They appear for the interior/small turret but not the larger gatling turret. Haven't tried the missile turrets.

Interestingly, my friend who was playing on the same server _could_ see the options on the large turret. Unclear why it's not appearing on random turrets and not for all payers.

FWIW I was the host.

Nizzine Jan 29 @ 6:42am
Crashes the game when trying to load preset.

Tempiik Jan 26 @ 5:55am
Hello. We have problem with this mod in our multiplayer. Turrets are set correctly according to picture in descriptoin of this mode, but none of our turrets are shooting. In best scenariom turrets destroyed 1 interior turret on ship, but after that all turrets stopped shooting. Any ideas?
Hate vanilla turrets wasting so much ammo and destroying our base.. Thank you for replies.
< >