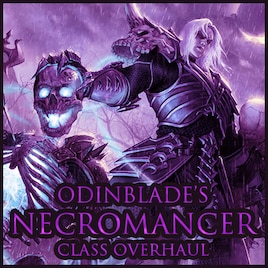 45 items
Description
This mod requires OdinCore - Mod Services to use.
Whilst the forces of nature maintain the balance of life and death, Necromancers relish in tipping the scales in either direction. This mod overhauls all existing Necromancer skills, as well as adding plenty of new ones, to deliver a truly terrifying Necromancer skill tree!

"Death is merely a state waiting to be undone..."

Playstyle
Magic schools in Divinity: Original Sin 2 have been designed to facilitate user creativity of playstyles and builds; this Necromancer Overhaul is no exception. With the enhancements made to all Necromancer skills, along with the introduction of over 15 brand-new skills, this overhaul bolsters the creativity of Sourcerers. Although magic schools are essentially an open book, I have identified 4-key playstyles I think you’ll all enjoy:


Build cards found in the image gallery at the top of this mod page give some high-level pointers into how to utilise these playstyles effectively. My personal favourite is the Bloodtide, a self-damaging mage with a penchant for mayhem.

Skills
CLICK HERE TO VIEW THE SKILLS[docs.google.com]
You may have noticed some skills from Divinity: Original Sin EE making a return with some additional effects, such as Oath of Desecration and Horrific Scream. I thought it was about time to bring back some old favourites to provide new and interesting build paths.

Additionally, as a comprehensive overhaul, this mod also reworks a lot of the basegame Necromancer spells, and I have compiled these changes into a doc:

CLICK HERE TO VIEW NECROMANCER SKILL CHANGES[docs.google.com]
New Necromancer Weapons
As with my other overhauls, I have added some new Intelligence-based melee weapons to bolster close-combat playstyles. Although there are currently no new weapon skills to accompany them, the new weapons will be a welcome addition to any team composition. 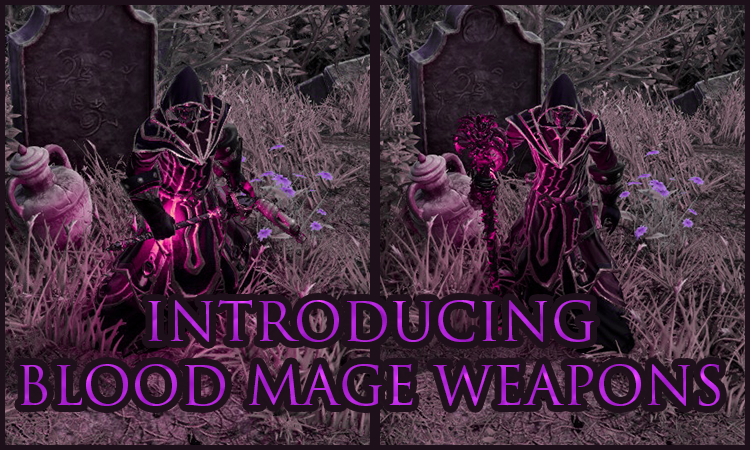 The new weapon types include: Physical Wands and Physical Staves, both of which provide a small boost to Life Steal in exchange for raw damage.

Drana, the Dark Artist is an expert in dark magic, and she is able to sell the party skillbooks. Drana also sells crafted skillbooks at levels 5 and 13. She may be found throughout the game in various locations:

Basegame Necromancer vendors also stock the new non-crafted skills and weaponry, and the new vendors can be toggled on/off whenever you like using the Odinomicon mod settings menu from OdinCore.

NOTE:THIS MOD IS NOT COMPATIBLE WITH THE CLASSIC VERSION OF THE GAME. ATTEMPTING TO USE THIS MOD IN CLASSIC WILL LIKELY CAUSE BUGS AND ISSUES.
Popular Discussions View All (7)

Tel.OS Apr 20 @ 3:03pm
I can't craft Corpse Explosion for a quest in Act 2. I'm thinking that either this overhaul, or the pyro overhaul, have replaced it. Not just from crafting, but seemingly in the world as well, since the one NPC I know that drops it on death (scripted to always drop) does not have it and has Condemning Explosion instead.

Fabz Apr 11 @ 7:57pm
Can't craft Blood Storm like in vanilla, when I try to mix a Source Hydrosophist or Necromancy with a non source, it becomes the skill Hemoplague. Btw, at least give us an option to NOT NERF the base skills like Grasp of the Starved and Blood Storm ??? If I knew this mod would ruin the skills I wouldn't have subscribed

LoveMaker Feb 22 @ 1:21am
Blood rain wasn't available from vendors to begin with if I recall correctly. Craft it.

RandomUser512567 Feb 18 @ 7:48pm
Is this mod removing blood rain from vendors?
I have some mods installed but it's the only one affecting necromancy.
If that's the case, that's completely retarded since end game requires AOE blood spells a lot, and this is pretty much the only spell for the job.

Geone Nov 2, 2021 @ 7:29pm
The new spells are fun to use but a little bland. The nerfs to the existing spells are a big oof and makes the base skills pretty useless. Blood Storm is now just detrimental to cast and barely deals any damage.

There should really be a version that just adds the new spells but doesn't touch the existing ones, the increased level requirements really lock you into being pure necromancer and heavily punishes diversity. And if you are using Divine War then expect to never get the majority of spells since you only get a skill point every two levels.

Creepy Havel Oct 31, 2021 @ 7:28pm
So a problem I've noticed,ones that deal %HP damage to cast (E.G. Blood Barrage / Sanguine Torrent) end up harming the caster more because the scaling of HP is faster than damage in terms of % especially early on. It would make more sense is HP sacrificed = base damage to then be multiplied by INT meaning it would be a Con + INT scaling.

You've probably moved on to Baldur's Gate 3 modding at this point but felt I'd share this feedback because while very interesting I'm finding myself using other skills because simply it's not good to be hurting myself more than my enemies.

AnEvilFantasy Sep 18, 2021 @ 1:04am
@Odinblade I seem to be having a slight visual issue with the spell "Horrific Scream", the description isn't listed correctly only showing Shout_KCE_OdinNECRO_HorrificScream_Description." I converted th file and checked it using an editor, but wasn't able to figure out whats wrong.

Röhrio Aug 13, 2021 @ 2:27pm
I cant summon any minions from corpses and cant even summon a corpse. This game is so broken

Jasper Aug 9, 2021 @ 4:39am
The issues with summons presented by other commenters are probably due to not having the Script Extender installed properly (one of the comments explicitly says they tested with this mod and OdinCore only). I use DU so I already had Script Extender v55.

As for compatibility, there's still some rough edges, especially with skill descriptions, but otherwise functional (not as bad as OdinCore Hydrosophist + DU).
< >