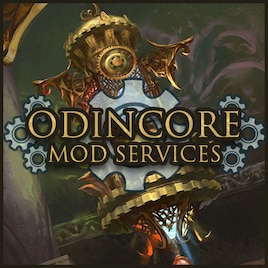 45 items
Description
REQUIRED FOR ODINBLADE MODS
OdinCore is a centralised mod resource for my D:OS2 DE mods, allowing them to communicate and interact with each other. It is required for most of my mods, so be sure to activate it!

As you may be aware, new skills from my various Overhaul mods were not used by enemies. This was because adding new skills would require each enemy to be changed, making them incompatible with other mods. Until now!

Enemy Skills is a scripted system which adds Odinblade skills to enemy characters and can be toggled ON or OFF at your leisure.

My various Overhaul mods add new vendors to the overworld, stocking a supply of new skillbooks and weaponry. This is also in addition to basegame vendors doing so.

Vendor Toggle allows you to show/hide the new vendors as and when you please should you decide you don't want to see their beautiful faces around Rivellon.

Simply use The Odinomicon to toggle these features.

Will adding this break my current saves?
Does OdinCore increase my load times?
Do I need to install all of your mods for them to work?
Credits
Workshop artwork: Yeong-Hao Han
Inspiration for this service mod: LaughingLeader

[ko-fi.com]
Thank you, and I hope you enjoy this mod!
Popular Discussions View All (5)

Watchman May 24 @ 8:45pm
i'd like to translate your mods into Chinese,if you allow me.

Nora Mar 23 @ 4:34pm
I found a solution for the 4 additional characters. The script extender needs to be saved in the DefEd -> bin

Not just the bin.

I had it saved in the wrong location and after moving it to defed -> bin everything worked fine.

Mail me to the Moon Mar 13 @ 1:17pm
Are you looking for sidework at all?
got a project I'm working on, and can commit 6months or so of funding.

Looking to design and playtest a crpg battle system.
Hit me up if you want to know more.

Sterne Feb 16 @ 11:48am
Hi, the mods won't charge after a long time on loading when we try to create a game with my friend, an error saying the configuration is not right even if we manage mods list correctly
< >