Store Page
DayZ>  Workshop > Not A Banana's Workshop
This item has been removed from the community because it violates Steam Community & Content Guidelines. It is only visible to you. If you believe your item has been removed by mistake, please contact Steam Support.
This item is incompatible with DayZ. Please see the instructions page for reasons why this item might not work within DayZ.
Current visibility: Hidden
This item will only be visible to you, admins, and anyone marked as a creator.
Current visibility: Friends-only
This item will only be visible in searches to you, your friends, and admins. 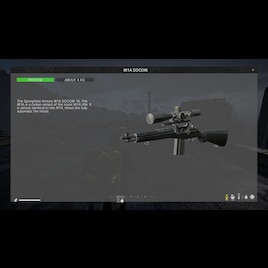 This item has been added to your Subscriptions. Some games will require you to relaunch them before the item will be downloaded.
Description
MoreGuns
Support channel for this mod: https://discord.gg/nPXHv9C

MoreGuns is a well named mod that attempts to increase the armory of DayZ even further than it is now, while maintaining as high of a level of quality and polish as currently possible with the current modding support. Overtime MoreGuns will evolve into MoreDayZ as we branch out from guns to new optics, locations, vehicles, attachments, and as much new and fun content as possible, so keep your eyes peeled on the update changelogs.

Currently, these are the additions MoreGuns brings to the game:

AWM: A very iconic weapon, the AWM, a bolt action rifle fed from a 5 round magazine. Can take any rail mounted optic, and the new scope brought in by the mod. Class names: AWMreal and Mag_AWMreal_5Rnd

M16A4: The M16A4, the latest and greatest widely used variant of the classic M16 rifle. Unfortunately the burst fire does not work, but I hope to maybe fix this someday, or hopefully the devs will add functioning burst fire to the game themselves. Class names: M16

Mk22 Mod 0: This is a very neat little gun, originally created for Navy SEALs to dispatch guards and guard dogs as quietly as possible. It features a very short suppressor with internals that where made of rubber and neaded to be replaced after a handful of shots. It also has a slide lock to prevent the slide from cycling and making sound there as well. Though currently, the slide lock and supressor are not in as I have not gotten those mechanics working yet, but soon enough they will be. The slide lock will be crafted with the gun to create one with a slide lock, and it will also be removable. The suppressors will only last for about 60 rounds before going to ruined. Class names: Mk22, Mag_Mk22_14Rnd

MP7: The MP7 is an SMG firing new 4.6x30mm rounds, at an absurdly high firing rate. Currently only has 40 round mag, will have more eventually. Class names: MP7, Mag_MP7_40Rnd

FN SCAR-L: The SCAR-L, has it's own 20 round mag, and also takes stanag mags and PMAGs. Class names: Scar, Mag_SCAR_20Rnd

Stechkin Automatic Pistol: The Stechkin APS is an automatic pistol, with a 20 round mag. It can be affixed to a stock, or stored safely within the stock. The stock reduces the recoil substantially. Class names: StechkinAPS, Mag_APS_20Rnd, APS_Buttstock

VityazSN (PP-19-01): This gun is basically a 9mm AK variant. It's neat feature is that it has both a traditional picatinny rail as well as the AK mounting system, so you can attach most optics to it! Class names: VityazSN, Mag_Vityaz_30Rnd


KNOWN ISSUES:
M1A: Bolt does not animate properly, only the charging handle does. This is temporarily intentional, because the way the M1A/M14 bolt works, is it isnt a direct translation back, the bolt actually rotates, then shifts downward. Due to the way custom guns are currently done in DayZ, I have to inherit off of other guns, and use their animations. So when the bolt is properly set up to animate, it inherits the animations from the SVD, which is a direct bolt translation backwards. This causes the bolt to clip through the reciever into your FPV, and looks *really* bad in my opinion. So for now the bolt has been deactivated. Very sad to do, but I had to pick the lessar of two evils.

Stechkin APS: The APS won't be using it's iconic cutaway mag that displays rounds because, again, DayZ doesnt have the animation sources to dynamically show bullets in the magazine depending on how many there is. So I feel as though it looks better with the mag it has that you cant see the bullets inside of, because in my opinion, having the mag always show empty, or always show full regardless of how many rounds are actually in it looks dumb. Again, when BI makes it possible to fix this, I absolutely will!


Donations
Anything I receive from donation will likely be put right back into mods we make as I am constantly looking for new assets, or at the very least will help me recoup the money I've spent so far on assets (As of writing this, I've spent a total of $330).

Special Thanks!
Thank you to Busiedbat306 for donating the costs of the Karabiner98k
Thank you to SierraRSV for donating the costs of the M16A4! Terribly sorry that I couldn't get Burst working for now!
And a MASSIVE thanks to WiiDevil from BWAF (Blue Waffle Attack Force, https://discord.gg/8bRqJcB check them out!) for being *very* generous. A lot of these guns wouldn't be in right now if it weren't for him!
Popular Discussions View All (18)

Servers that host this mod
Not A Banana

HUNTER two alpha 6 minutes ago
@Not a Banana can you upload the older version of the Mod, without CF please ?

Not A Banana  [author] Jul 4 @ 2:39pm
Yes, in the future this mod will be inside expansion fully, just havent had time to transfer.

Star wing Jul 4 @ 1:06pm
Can we mix this mod wit ddayZ expantion and your other weapons mod as well?

Next Gemini Jul 3 @ 4:24pm
is there a link or something to a trader config file?

Yakov Semechki Jul 1 @ 2:57pm
hello @not a banana is your mod up to date with the 1.08? or it doesnt need any update? id like to be sure before installing it ;)

NikoBloc Jun 21 @ 6:01am
Just an idea, but it would be nice if the safety selector on the pp19 was in one of the fire positions. Because currently when the bolt cycles its clipping through the safety. I think this is why all the vanilla ak models have the safety off. Otherwise lovely mod and thank you for your hard work!

Not A Banana  [author] Jun 8 @ 8:10pm
There's no conflict, but the two are not cross compatible. I will try to get the mod fully merged into expansion soon
< >