Store Page
RimWorld>  Workshop > Rainbeau Flambe's Workshop
This item has been removed from the community because it violates Steam Community & Content Guidelines. It is only visible to you. If you believe your item has been removed by mistake, please contact Steam Support.
This item is incompatible with RimWorld. Please see the instructions page for reasons why this item might not work within RimWorld.
Current visibility: Hidden
This item will only be visible to you, admins, and anyone marked as a creator.
Current visibility: Friends-only
This item will only be visible in searches to you, your friends, and admins. 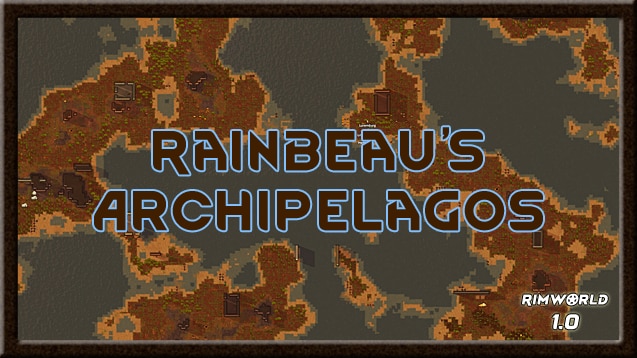 Rainbeau Flambe
Offline
See all 870 collections (some may be hidden)

This item has been added to your Subscriptions. Some games will require you to relaunch them before the item will be downloaded.
Description
Have you ever wanted to play RimWorld on an island map? Of course you have! And now you can!

"Archipelagos" adds exactly what its name implies. You'll now find island chains dotting the coastlines of your world maps. More specifically, the mod adds a variety of new biomes to the game, each of them an island-based variant of the corresponding vanilla biome.

Compatibility:
Adding "Archipelagos" to a saved game shouldn't cause any trouble, but removing it from a game in progress could potentially create problems, even if you're not actually playing on an island map.

"Archipelagos" is not, at this time, compatible with Lanilor's "Terra Core" mod. That mod makes extensive changes to map and terrain generation which would be very difficult for this mod to work around.

"Archipelagos" should be compatible with most any other mods.

If you're going to build a base on an island chain, you should probably make sure you can build bridges and catch fish. I, of course, would recommend my own "Advanced Bridges" and "Fishing" mods to fill those needs, but there are obviously other options available, as well, any of which should work just fine with this mod.

Credits:
The mod utilizes Pardeike's "Harmony Patch Library." (No additional download is required, as the library is included with the mod.)

RadGH Mar 19 @ 11:12pm
The conversion works pretty good but unfortunately the biome is not compatible with a few mods. Hope when this officially gets updated to have compatibility with boats and with Vanilla Fishing Expanded.

Artfactial Feb 8 @ 12:09pm
Awesome and quick work, thanks!:D I'm not sure when I'll start a new world but I will test the patch out tomorrow!^^

Kaltsbreighe[R°] Feb 8 @ 10:09am
Rough compatibility patch is up, marking this and VFE as pre-reqs. It's not perfect, but fishing zones at least work now, which I think is a fair catch (pun intended) for ~3-4 hours Googling and ~30 minutes fixing my own broken XML.

Kaltsbreighe[R°] Feb 8 @ 7:01am
@Artfactial: Just put them together, VFE doesn't recognize the archipelago biomes when it pulls what fish are available. You can still set the zone up, but it reports no fish exist and pawns won't use it by extension.
Shy of an official patch from RF (unlikely since they have their own Fishing mod) or the VXE Team (unlikely since they're working on other food modules) it'll be a DIY job. Looking into coding now to see if bashing them together would be easy enough for an end user.

Artfactial Feb 1 @ 9:39am
Forgive my ignorance but, why wouldn't this be compatible with Vanilla Fishing Expanded?
< >