Store Page
Hearts of Iron IV >  Workshop > Vorondil's Workshop
This item has been removed from the community because it violates Steam Community & Content Guidelines. It is only visible to you. If you believe your item has been removed by mistake, please contact Steam Support.
This item is incompatible with Hearts of Iron IV. Please see the instructions page for reasons why this item might not work within Hearts of Iron IV.
Current visibility: Hidden
This item will only be visible to you, admins, and anyone marked as a creator.
Current visibility: Friends-only
This item will only be visible in searches to you, your friends, and admins. 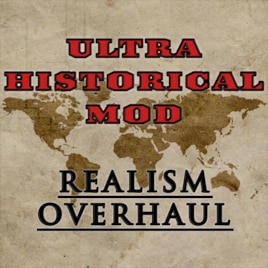 Hearts of Iron IV: Together for Victory

Hearts of Iron IV: No Step Back
Created by

thienkhoi001
Offline
See all 99 collections (some may be hidden)
You need DLC to use this item.

This item has been added to your Subscriptions. Some games will require you to relaunch them before the item will be downloaded.
Description
0.12.5 beta for HOI4 1.11.11

HOI4 ULTRA's goal is to give a historical feeling to Heart of Iron. Our ambition is to make the less changes as possible from the vanilla, but rather adapt it to a real historical balance and is meant to be played in Multiplayer.
The original goal was to give an historical repartition of the industry, but we decided to add/fix/tweak other contents we feel important.

Compatibility
HOI4 ULTRA is compatible with HOI4 1.11.11 version
NOT Ironman/achievement compatible
NOT compatible with any mod changing the checksum. If you want your favourite mod integrated, just ask it (and the mod creator too) and we'll see what we can do.

All current DLC (TFV, DOD, WTT, MTG, LaR, NSB) required for a complete experience. We cannot promise potential issues if you play without the required DLCs.

For the moment, only the english version is supported

Main feature - Industrial rebalance
The primary objective of our work was to "correct" the industrial balance in the game :
In vanilla, industry is balanced around "playability" and not around History. For the HOI4 devs team, each minor country should be "playable", the Axis should have a chance to "win", global conquest should be a possible achievment...

We don't agree with this view and want rather to play in a situation with historical settings concerning the relative power of each countries.

That's why we did a research work about the industry in the WWII timelapse in order to translate it into a mod. Our main sources are The Wages of Destruction from Adam Tooze and The Rise and Fall of the Great Powers by Paul Kennedy.

From the later, we took the concept of "war potential" for each 1936 country and translate it into ingame industry (civilian, military and dockyard). To gives some figures, the 7 Great powers have more than 90% of the world IC and the gap between the last major power (Italy) and the first (the USA) is more than 1 to 10.
To have a better repartition, we made each vanilla IC equivalent to 2 IC in the mod.

To stay in the border of plausible, we also had to change 2 keys elements : the industrial growth rate (nerfing heavily industrial snowballing, we now get a growth rate under 10% per year in 1936) and the ressources system. Coal, Iron and Bauxite were added and globaly ressources are less expensive to get (depending of the ressource) to avoid overpowered minors from lots of ressources and majors having to trade away half of their industry.

Other features
We tryed to keep things as close to vanilla as possible, so most of our work here are balance tweak for a more realist gameplay. Here is a list of some features we added or changed :

Projects and perspectives
Since we never test enough, we'll be pleased to hear your feedback and suggestions to improve the mod within the same philosophy.

Sub-modding is also encouraged if you want to integrate your favourite mod or create a feature inside the mod, you're welcome ;)

We are doing an overhaul of the equipment and technologies to get major-unique stuff.
A french localization is scheduled. Perhaps a german one too. For the other langages, any help would be appreciated.

Partnership
We are in partnership with the World Ablaze team. We share ideas, concepts and features. Make HOI4 more realistic is the main goal of both mod
Try World Ablaze!
We helped them to make their industrial balance and they gave us their awesome tank tree!
We learnt a lot from them, especially on research and equipment fields. Parts of the code of ULTRA (the whole tank tree and other features) are from their awesome work.
So a special thanks to Uncharted!

credit
A big thanks to all the contributors, testers and data researchers!
Special thanks to all excellents modder which let us borrow part of their work into ULTRA:

- Atreides for his BIG resources features in the Yet Another Mod - The Case of Resources mod.
- Wunderwaffle for the nice WW's Buttons+ mod
- Dziurkacz for the cool Coloured Puppets mod
- Gundahar for the obligatory Coloured Buttons mod
- Elouda for the totaly awesome Naval Rework mod
- Yard1 for the usefull Recall Volunteer mod
-Lennard for his Topbar Resources mod
- Myzael, Alex Brunius and Voigt for big help and ideas from Improved Historical MP mod
- RPM, tank-encyclopedia[tanks-encyclopedia.com] and http://www.wardrawings.be/ for the very niice equipment images.
- German Generals for extra officier portraits

If I've forgotten anyone, please tell me so I can credit you
Popular Discussions View All (25)

Hjalfnar_HGV  [author] Jun 28 @ 12:42am
That probably means you are lacking the necessary DLCs. For the ships and tanks to work you need the Man the Guns and No Step Back DLCs.

gorka.ganansanz Jun 28 @ 12:01am
I can't resesearch tanks neither ships, they just don't appear. Whow can i solve it?

Wumpus64 Jun 18 @ 11:17am
Any tips on how to play USSR? I just downloaded the mod, tried a game as the Russians and got destroyed. I built only civs until 1939 and only mils from that point on. Had only 200 divs (3 million men fielded) when barb started. How do I make enough equipment so I can train divs? Had around ~80 factories on fighters, 20 on heavy equipment, guns, and support, 30 on light art. ~50 on medium tanks. In total ~2000 factories before barb. Also trucks were a pain and I constantly had a shortage despite 40 factories throughout the game, even without motorizing supply hubs. Thanks.

Paulus Jun 18 @ 9:13am
@manteuffel386 stronger panzer formation you must use to break the front, then weaker and motorized infantry division to fullfil the gap and encircle by pincer armored formation, then after you has a lot of soviet troops "trapped" then use your regular infantry division to reduce the size of your gaps. This process must repeat a lot of time then the soviet AI cant recover fast enough.
Remember that in real barbarossa operation almost 5 millon troops kill o captured by germans.
i recommend that you micro your panzer units, let de AI batlle planner do the nastry job of fight the soviets in your pockets.
In history, soviets recover a lot faster than AI counterpart, maybe a look of this video in youtube one can see this.

manteuffel386 Jun 15 @ 12:36pm
@Paulus. Thanks a lot for the suggestions. I'm also going to try fielding a similar army to the real Barbarossa invasion force. After some quick research, I see Germany fielded 20 armored divisions in June 1941 on the eastern front, each of which had an average of 180 tanks (about 3400 tanks total). The divisions were a mixture of all tank types available (Panzers I,II,III,IV, and 38(t)). Of these, roughly 1700 were light tanks, 1000 Panzer IIIs and over 400 Panzer IVs plus other vehicles. In HOI4 this would approximate to a tank division template that includes 2 light tank battalions and 1 medium tank battalion (or maybe also have another template with 2 mediums and 1 light). Maybe having more numerous but weaker panzer divisions will lead to more breakthroughs and land captured.

Paulus Jun 14 @ 4:11pm
@manteuffel386. when i play as germany, i usually do what german did in real history, encircle and encircle some more, even with that push the soviets cant recover enough to proper defense, i did recomend to push in armoured pircing in this formation:
1) Push to Riga or Leningrad from start (June 1941)
2) Push two armoured formations to misk and smolesk (usually the lack of supply its the only thing that can stop you)
3) Push to Kiev and try to encircle the troops in hungarian and romaninan border.

After that its up to you take Moscu or futher more but the soviet ai cant recover fast enough to stop you.
Maybe the soviet ai need a little more help when Germany take some strategic point (Smolesk or Kiev), buy usualy i can get 5 or 7 millon troops kill or trapped by this armoured formations.

manteuffel386 Jun 11 @ 11:26pm
Thanks for the reply! One more question. Any tips for playing as Germany on the Eastern front? I invaded the Soviet Union June 22nd 1941, but by January '42 I only managed to push the Russians out of eastern Poland and half the Baltic states despite inflicting over 3 million casualties from mass encirclements. I often have difficulty taking tiles even with my armored units, air superiority and CAS. I know the game is supposed to be really difficult (or impossible) to win as Germany, but I would love to be able to do at least similarly as well as Germany did in real life. Thanks so much for your work on this mod, I've been enjoying it a lot.

Hjalfnar_HGV  [author] Jun 11 @ 12:13pm
Yes. Usually you have to take all of the Maginot line, Paris, North East & West France. You can ignore Maginot but in that case need to push to Bordeaux and maybe further.

manteuffel386 Jun 11 @ 4:33am
Hi. When playing as Germany, what exactly are the conditions to cause France to surrender? I thought it might be to occupy every single tile in the air-zone that stretches from the Ardennes to Paris to just outside Dunkirk, but this doesn't seem to work. In fact I occupy most of Northern France and they still won't surrender? Is this normal?
< >