Store Page
Divinity: Original Sin 2 >  Workshop > LaughingLeader's Workshop
This item has been removed from the community because it violates Steam Community & Content Guidelines. It is only visible to you. If you believe your item has been removed by mistake, please contact Steam Support.
This item is incompatible with Divinity: Original Sin 2. Please see the instructions page for reasons why this item might not work within Divinity: Original Sin 2.
Current visibility: Hidden
This item will only be visible to you, admins, and anyone marked as a creator.
Current visibility: Friends-only
This item will only be visible in searches to you, your friends, and admins. 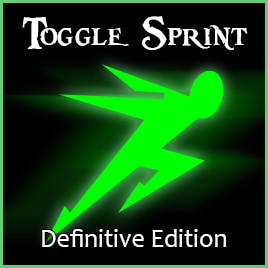 23 items
Description
Toggle Sprint features fully-customizable running speeds for both the party and NPCs in combat.

PSA: Toggle Sprint has many features missing in Larian's new "Endless Runner" addon, so it is very much staying maintained.
Features:
Optional Script Extender + LeaderLib Support
If both LeaderLib[github.com] and Norbyte's Divinity Script Extender[github.com] are enabled, Toggle Sprint's settings will be available under the "Mod Settings" UI, located in the regular Options menu, as an additional tab. 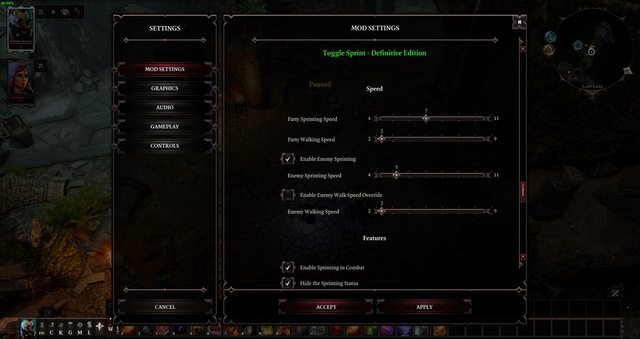 Check the following guide for instructions on installing the script extender:

Settings Book
The Toggle Sprint settings book can show up at the following traders:

Tips/Notes:
Support
If you're feeling generous, an easy way to show support is by tipping me a coffee:

All coffee goes toward fueling future and current development efforts. Thanks!

Haka Sep 21 @ 11:05am
This mod is in the mod list for me, but the people arent showing up. Do I have to have anything else downloaded?

Flood Nov 27, 2021 @ 5:21am
new file,
MOD is enabled
No books
no speed changes
Through the purchase of books, no reaction after use

I only used this MOD,
And "Achievements" earned in "nexusmods."

🅳🅴🅺🆄 🅺🅸🅳 Aug 22, 2021 @ 1:26pm
So today, out of nowhere, I realized only my main character is sprinting at the set speed. The rest of my party members seem to sprint at default vanilla speed. Tried messing around with the settings but nothing changed. Also never had an issue with this mod before, any tips?

Wicked Kitsune Sep 18, 2020 @ 1:27am
Any mod, even purely cosmetic, will disable achievements. There is a workaround, though - install script extender and you should be fine.
< >