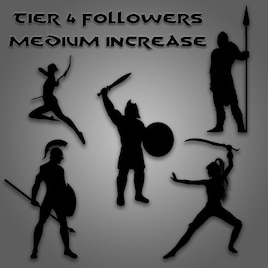 This item has been added to your Subscriptions. Some games will require you to relaunch them before the item will be downloaded.
In 1 collection by Multigun
Follower Mods That Work Great with LBPR

Mod update is out. See Change notes for full details.

All manual downloads now require logging into the Discord server for access, including previous versions.

Mod Updating Guidelines
If you are having trouble updating the mod, please visit this documentation.[docs.google.com]

Please direct questions, comments, concerns, feedback, and bug reports to our Discord. The Discord link is the button below.

What this mod does is makes it so Tier 4 NPCs will have an increased chance to spawn in their designated locations. The vanilla percentage chance of a Tier 4 NPC spawning in a single location, is roughly 1-2%. For solo players or small server play, this can cause an insane amount of grinding to get a single Follower.

Unlike our Always Spawn version, this mod is meant to increase the chances of Tier 4 Follower Spawning but to a reasonable level. It doesn't mean they will always spawn, but we adjusted the numbers on a case by case basis to what we felt would be fair.

For example, Fighters and Archers, who often have multiple spawn locations, have around 20% chance to spawn, and Crafters 40%. That does not mean these numbers are final. Tweaks are done every update and will continue to be done.

Compatibility
All three versions of the Tier 4 Followers mods will reliably work on any official map (Exile Lands and Siptah) or modded map that utilizes the WeightedSpawnTable and it's default entries found in it.

Surge Uniformity
Thanks to Alrenstorm for the idea. All surges are unified so that they have same chance to spawn the various NPC's during a Surge event.

Bonus
A bonus to downloading this mod is that I make sure to fix a few Tier 4 NPCs that weren't spawning at all. This can and does change from version to version as Funcom plugs up the holes, but we make sure that you don't need to wait that long to get the missing NPCs of the world. As for any unused NPCs that I find, for funsies I include those in existing spawn points and have them share a spawn with something else. That way, you don't need to admin in anything if you want to earn them the right way.

Mod's Are Feature Complete
Due to feedback from players, all versions of Tier 4 Followers are considered completed versions. No further changes will be made as far as features, improvements, tweaks, other versions, or Follower variety will be added. They are considered low priority, and I will only update them to keep them working.

Multiple Mod Warning
Use only one of the three mods offered for increased spawn chances for Tier 4 Followers, either the Always version, the Mild version, or the Medium version. Choose ONE

Load Order Recommendation
Bug Reports
As for bug reports, feedback is always important for all my mods. But these Tier 4 Followers mods in particular I have had a great deal of what ended up being false reports. It is important that you be thorough in your report for it to be most useful to me.

In order for your bug report to be the most efficient that it can be, you must consider the following information and provide all the requested data.
If you cannot provide me with the information above, then I am unable to fully process your bug report. Thank you for your understanding.