Store Page
Arma 3>  Workshop > Aristine's Workshop
This item has been removed from the community because it violates Steam Community & Content Guidelines. It is only visible to you. If you believe your item has been removed by mistake, please contact Steam Support.
This item is incompatible with Arma 3. Please see the instructions page for reasons why this item might not work within Arma 3.
Current visibility: Hidden
This item will only be visible to you, admins, and anyone marked as a creator.
Current visibility: Friends-only
This item will only be visible in searches to you, your friends, and admins. 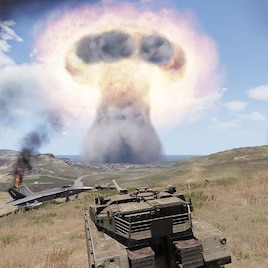 Aristine
Offline
See all 730 collections (some may be hidden)

This item has been added to your Subscriptions. Some games will require you to relaunch them before the item will be downloaded.
Description
Aristine's Advanced Ordnance
This mod adds 3 new aircraft based weapons and adds a slight tweak to the wipeout and neophron to aid in their usage with the anti-radiation missiles.

Weapons
S.E.A.D Missiles: AGM-88E HARM, and KH-58U ARM
Both of these missiles use passive radar guidance, with a maximum lock on range of 15km and a terminal active radar guidance with a seeking range of 1km. Due to the terminal active radar guidance, you can freely fire or fire on a marked target without a lock and the missile will still have a high chance of hitting the target. These missiles feature a 450m fuze distance however, meaning they will do no damage until they've travelled at least 450m. Please note that you may be unable to cycle target with the R key on aircraft that lack a marking sensor with an appropriate range. If this is the case for your aircraft (usually such as fighters), you'll need to manually target with the T key or get closer to the target.

B61 Nuclear Bomb
The B61 is an unguided bomb that can be attached on nearly any plane bomb pylon. After dropping, the bomb takes 15 seconds to arm. Upon impact, the bomb explodes slightly bigger than a gbu-12, and causes a nuclear explosion if armed. The nuclear explosion destroys everything in a 1.5km radius, severely damages everything in a 3km radius, produces radiation in a 4.5km radius(decays over 1hr), and disrupts electronics within a 7.5km radius.

If Addon Options are used to enable the "Nukes Require Arming Code" option, then nukes will fail to arm unless the side has a ticket to spend.
Tickets can currently only be obtained via scripts. For example to add 1 ticket to the Blufor side, run
[west, 1] call ARI_fnc_updateNukeArmTickets;
Compatibility
The ordnance in the mod should work on all vanilla, CUP, RHS, and FIR AWS planes.

Zeus
I'm looking into adding fire support options for the nuke into Zeus. Until then, I recommend the Achilles mod. You can use it to set a variable on an object, and then use that variable to execute the nuke script like so.

Take a butterfly or other object, and use Achilles' set variable on object module. Set a global variable called nuke. Then use the execute code module and run the following code in global + JNI mode.
[getPos nuke] execVM "ARI_AO\scripts\nuclear\detonateNuke.sqf";
To customize this further, you can fill in the optional variables.
[getPos nuke, blastRadius, radttl, raddmg, radRadius, empttl, empRadius] execVM "ARI_AO\scripts\nuclear\detonateNuke.sqf";
You can also use some of the effects without a full nuclear blast like so.
[getPos nuke, radius, timetolive] execVM "ARI_AO\scripts\nuclear\disperseEMP.sqf";
EMP effect in given radius.
radius: your desired radius - normally 7.5km
timetolive: how long you want the effect to last - normally 150seconds (actual length is randomly between 100% and 150% of this value)

[getPos nuke, radius, timetolive, damage] execVM "ARI_AO\scripts\nuclear\disperseRadiation.sqf";
Disperse radiation in given radius
radius: Desired radius - normally 4.5km
timetolive: Desired duration of radiation (how long it takes for all radiation to disappear). normally 1800 secs
damage: Desired damage per second when at center of radiation source at starting time. normally 0.007
Note that with radiation, it is essentially a circle with given radius, which retreats over timetolive. After timetolive elapses, the radius is 0. Furthermore, the dps taken is calculated by multiplying damage by the ratio of unit's distance to the current radius.

Kazutrash Sep 12, 2019 @ 5:09pm
The nuke is not working when dropped from a plane. I went to 5000m and flew upwards while dropping the bomb. It took 37 seconds to hit the ground so i know i gave it plenty of time to arm. Still, only a very small explosion, no nuke damage or effects. Still works with commands though.

YuriVII Jun 2, 2019 @ 4:32am
I would like to do this in sp. That would mean I'd need a trigger to activate it. Dropping from a plane is too complex. I just need the explosion. Can I do that? Also can I edit distance of radiation effects et all?

adamd May 4, 2019 @ 11:20pm
Military equipment is hardened against EMPs so they would not be inoperable after a nuclear blast. This inaccuracy is very frustrating