Store Page
RimWorld >  Workshop > Uuugggg's Workshop
This item has been removed from the community because it violates Steam Community & Content Guidelines. It is only visible to you. If you believe your item has been removed by mistake, please contact Steam Support.
This item is incompatible with RimWorld. Please see the instructions page for reasons why this item might not work within RimWorld.
Current visibility: Hidden
This item will only be visible to you, admins, and anyone marked as a creator.
Current visibility: Friends-only
This item will only be visible in searches to you, your friends, and admins. 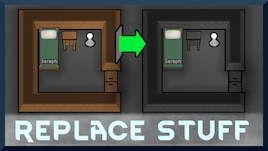 This item has been added to your Subscriptions. Some games will require you to relaunch them before the item will be downloaded.
In 2 collections by Uuugggg
Uuugggg's RimWorld mods

26 items
All the RimWorld mods you need

56 items
Description
Place buildings anywhere, on top of existing things, and the game will handle it

- Replace the stuff that the building is made from ( replace a wooden wall with slate wall )
- Upgrade things: like doors to autodoors, beds to bigger beds, workbenches to the electric version
- Build over rocks, water, or undiscovered areas - rocks will be mined away, and bridges built over water, to make way for construction.
- Destroyed buildings that are auto-rebuilt will remember their settings
- Over-wall Coolers so you don't need to break a wall to install a cooler

Replace Stuff
Use the new Replace tool in the "Architect/Structure" menu to replace any building's materials. Or place a building with new stuff over an old building. New stuff is even applied to blueprints and frames.

Upgrade Buildings
Upgrading buildings means you can build the new building over the old version, and it will keep the old one in place until the construction is done, and the new one should keep settings.

The list of Buildings that can be upgraded:
-Walls, doors, auto-doors
-Beds to other beds
-Coolers to other coolers (i.e. make your over-wall coolers into wide coolers)
-Fueled Stove/Tailoring bench to electric versions
-Fences from the fences mod (Anything in the Designation Category "Fences")
-Tables
-RimFridges (3rd party mod)


This type of replacement does destroy/create the thing, so certain internal data structures are re-built, but things like temperature of rooms are retained. The upgrade process has to be defined for each type, so the list is just what I thought to do.

Again, the settings saving process has to be defined for each type, so the list is just what I thought to do.

Build over rocks/water/fog
Place blueprints over mountain rock, and a job to clear the rock will be created so the building can be placed.
-There's a toggle on the bottom-right of the screen to disable mining rock when placing blueprints - so if you're adding floors to mountain rooms, it won't carve out the mountain walls)

Place blueprints over water, and a job to build a bridge will be created so the building can be placed.

You can build in undiscovered areas (but after revealing a new area, invalid blueprints are canceled, often due to terrain)

Over-wall coolers
The new over-wall cooler and vents behave exactly like normal coolers, but do not act as walls, and must be placed on top of walls (Which means adding a cooler doesn't break the walls).

Does NOT work over mountain rock. Rocks aren't walls. Smooth it into a wall first.

Also - New Double-width over-wall coolers for your two-wall thick freezers. (In a drop-down menu when you select coolers)

(I'd really like to make the base coolers work this way, but there is a lot of stuff preventing that, and then it would not work with current games since there isn't a wall under them)

In the settings, you can disable either vanilla or over-wall coolers/vents from showing up in your build menu.

And, why not, you can place coolers/vents even if the hot/cold tiles are blocked, because you can later remove the blockage.

-Buildings with quality are assigned a new quality level. (as if it were reconstructed)
-Damage done is reset (as normal deconstruction/reconstruction would reset the HP).
-Buildings generally can't be used when being replaced. (a tricky thing to handle)

-Replacement jobs can fail just like normal construction can fail, which loses 50% materials and resets work done.
--Replacement failure does account for the fraction of work that is deconstruction work, so it doesn't fail on the first part and doesn't reset work done past that mark.


Rock replacement:
-When building over rock, miners and builders will both mine away the rock to make way for the building. If it's valuable ore, your builders who are unskilled miners will lose potential ore. You may want to cancel your building projects until the skilled miners do their job.
-Resources are delivered to frames blocked by mountain rock (otherwise clearing out one rock tile for a wall would make you deliver only to that frame, so now it delivers to all wall frames even if they are not yet cleared for building)


* Okay maybe not anywhere - This mod lets you place buildings in places you probably want to, but not literally anywhere. The previous list of features is where you can now place buildings, but it's not like this lets you place a wall over a turret and it'll decide to deconstruct the turret to make room.

Corner walls are buildable and mineable from the inner corner. Vanilla allowed frames and smoothed walls to be mined, ?!? So now blueprints and rock/ore are workable too.

Smarter Construction mod make it so the corner wall is built first and won't get blocked to begin with.

This doesn't need a new save, but this will affect saves of course, if you have the new coolers or replacing jobs in progress. Remove those before removing the mod.

QualityBuilder doesn't use the minimum quality setting when replacing building material - it won't re-build to get a better quality. That being said, it can still restrict building to skilled builders only.

Don't use Better Coolers/Better Vents. It breaks replacing walls with doors. It only adds the same over-wall coolers anyway.

ED's Reverse Cycle Coolers changes the vanilla Cooler and re-writes a bunch of code so it's 100% not compatible with other mods.

Ludeon Forum (modlist) : https://ludeon.com/forums/index.php?topic=40701
GitHub source : https://github.com/alextd/RimWorld-ReplaceStuff
People seem to like donating so why not: https://ko-fi.com/alextd
Popular Discussions View All (5)

Will of God 12 hours ago
Naked chicks keep popping in game after install of mod, is this normal?

Uuugggg  [author] 14 hours ago
This mod does nothing with floors.

Ygdrad 14 hours ago
Floors are acting up for me. Wooden floors are getting removed before stone floors get installed.

Will of God Nov 25 @ 9:59pm
Bug: over the wall heaters allow colonists and animals to pass through them.

VolatileGlitchAviator Nov 23 @ 8:22pm
does anyone else get the issue of trees being uprooted for replant rather then cut down?

jewish Nov 21 @ 1:30pm
Sorry, the bridge thing has nothing to do with this mod. Not sure why I assumed it did. Apologies.

Daniel14541 Nov 21 @ 2:35am
So autodoors and doors don't interact well with each other. As in to replace any kind of autodoor with a different material of autodoor I have to deconstruct it first.