Store Page
Arma 3 >  Workshop > AuburnAlumni's Workshop
This item has been removed from the community because it violates Steam Community & Content Guidelines. It is only visible to you. If you believe your item has been removed by mistake, please contact Steam Support.
This item is incompatible with Arma 3. Please see the instructions page for reasons why this item might not work within Arma 3.
Current visibility: Hidden
This item will only be visible to you, admins, and anyone marked as a creator.
Current visibility: Friends-only
This item will only be visible in searches to you, your friends, and admins. 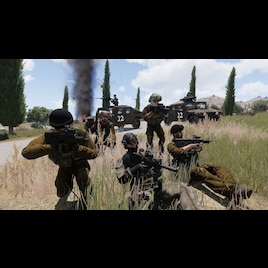 This item has been added to your Subscriptions. Some games will require you to relaunch them before the item will be downloaded.
In 2 collections by AuburnAlumni
Operation Morning Star

"On behalf of the CFP team we are extremely excited to announce a new community mod designed to bring a rich and diverse set of factions to Arma 3! This ambitious project is off to a flying start with 73(!) new or enhanced factions, over 900 new custom retextures, items, and support for ZEUS, VCOM, ACE3 and ALiVE. We're building factions using CUP as a base, as CUP includes a huge array of vehicles, weapons and equipment in use by today's aggressors. We specifically built the factions with mission making in mind, with a wide variety of groups (including static weapons) and support for mods such as ALiVE and VCOM. We're very thankful to the community donations of assets so far and we welcome the community in helping us bring more factions to Arma 3!" - CFP Lead Developers - Tupolov & AuburnAlumni

CFP is a community project to provide Arma 3 with 100 new or enhanced real world factions/sub-factions involved in current and historical armed conflicts.

Factions are delivered in a modular way, enabling groups to maintain their own tailored version of CFP by simply excluding any components they don't need, or those possibly in conflict with other mods.

List of CFP Factions completed and upcoming (Completed factions have their faction name listed to the right. No faction name means that faction has not been completed yet).


Customizing load-outs for CFP units in 3D Editor (3DEN)
CFP uses technology to script and randomize loadouts of units - this provides a massive variety for the units you'll see on the battlefield. In order to customize the loadouts of units in 3DEN editor, you will first need to disable the scripted loadout and/or the randomization. To do this simply:

For more information
Please come join us over at out GitHub page!
https://github.com/tupolov/cfp

insertcringeynamehere Jun 19 @ 11:29am
can you give the abu sayyaf members east asian faces (because they look more similar to east asians than melanesians)

returrn fire May 25 @ 6:47pm
how can i make it work with DUWS (dynamic universal war simulator )

Godis Apr 18 @ 9:49am
No entry 'bin/config.bin/CfgVehicles/CFP_B_USRANGERS_M1126_ICV_M2_CROWS_WDL_01/Turrets/CommanderTurret.MaxHorizontalRotSpeed' .

panzerschreck Mar 23 @ 1:06am
would it be possible to add chechens (kadyrovsky) to russia, with beards?

SKEENBREEN Mar 3 @ 12:53am
For those who mention missing factions.

List of CFP Factions completed and upcoming (Completed factions have their faction name listed to the right. No faction name means that faction has not been completed yet).