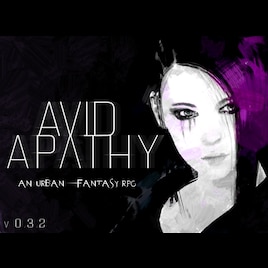 Bored Robot
Offline
See all 3 collections (some may be hidden)

This item has been added to your Subscriptions. Some games will require you to relaunch them before the item will be downloaded.
Description
[DISCLAIMER: This mod requires content from the D20 Modern Haks version 2.2. These files are not available on Steam Workshop at the time of this writing, though they can be found at the following link: https://neverwintervault.org/project/nwn1/hakpak/combined/d20-modern-haks-version-22]

The Avid & Apathy is an action-focused singleplayer adventure for both original Neverwinter Nights and the Enhanced Edition.

BACKGROUND
The year is 2086. Mankind is locked in a global war with the mythans, mythological creatures come to life. As the war enters its 16th year, a peaceful solution seems more like a pipedream. Instead, the war itself has become commercialized. At the center of this economy are a new breed of warriors who utilize magic and martial arts instead of conventional firearms. Answering to no army or country, these renegade fighters have become the rock stars of our era. With no unifying banner between them, the public has dubbed them "Nomads".

You are one such Nomad, a promising young recruit in a group of established veterans. What begins as a simple mission becomes a desperate quest of self-discovery, where powerful agencies work against you and the greatest enemies you face are your own demons...

PLANNED FEATURES
This is an extremely early alpha of the module, and currently exists largely to get feedback on the direction of the gameplay mechanics. A large number of planned features have not yet been implemented, the story is not yet complete, and some gameplay glitches may also occur. Admittedly, I'm mostly sharing the mod at this stage just to take a bit of a breather from all the work I've been putting into it, and to try to generate some constructive criticism to get out of the "echo chamber" effect.

As the mod is still in early alpha, combat has not yet been adequately balanced. Save often, and there's no shame in turning on God Mode.

This mod uses the D20 Modern haks. Does it use the D20 class system as well?
No, the default NWN classes are used, meaning you can import characters from basic NWN campaigns with no conflicts.

SinForged Jul 27 @ 5:48am
Hey, this looks pretty awesome, downloading the D20 haks now. Always wanted a sci-fi setting with guns in NWN for some reason (just seemed interesting to me), and the rest of the stuff looks pretty interesting too.

Bored Robot  [author] Mar 14 @ 1:18am
It may be grossly late but 0.3.2 is here!
Sadly this update doesn't add story content as I originally intended. The good news is it's chock-full of under-the-table fixes and improvements aimed at overhauling guns and getting all currently-existing facets of the sponsorship system working as they should. You'll notice a big difference in how visceral combat feels once you get in your first gunfight in this version!

Bored Robot  [author] Dec 22, 2019 @ 11:06pm
Ok so obviously I'm running late on that new version. I do apologize, I've had a few major time sinks over the last month (*cough* *cough* Shenmue III) but my goal is absolutely to release a working update before the end of this month!

Bored Robot  [author] Oct 12, 2019 @ 8:32am
Version 0.3.11 should be up within the next week. In addition to some much-needed bugfixes to the Sponsorship system and certain battle maps, this version also introduces a completely overhauled firearm system (including varying fire rates for different weapons), 2 new firearms (the MP5-40 and the Vektor CR-21), increased speed for all creatures, a new enemy faction for the Katsuragi Shrines battle, more functional statistics in the Hideout computer, and beta implementations of the Command feats for advanced party control.

Version 0.3.2 should debut by early November, which will include 4 new missions and hopefully some playable content for the Brazil chapter.

Bored Robot  [author] Sep 20, 2019 @ 2:28pm
@Nocturnic Thanks for your feedback! The map is actually supposed to be revealed at the start of every battle scenario so that you can instantly tell where the Command Zones are. This doesn't happen right now for the Palacio battle due to an oversight on my part, so that will be fixed in the next update.

Nocturnic Sep 15, 2019 @ 5:49pm
So far from what I played of it (via manual download, Steam was being a right twat), the soundtrack is great but the prologue Command Zone areas were pretty hard to find. I did eventually find them all but I think the area could stand to be smaller or the underground area could be less confusing to find.

Other than that, from what I played, it's pretty bloody awesome and I wish there were more modules that used the D20 Modern pieces because this, this is inventive!

Bored Robot  [author] Jun 18, 2018 @ 6:57pm
@Tasatos
Thanks! Work on the mod is slower than I hoped but coming along, so I absolutely aim to get at least the first chapter finished before the end of the season.
< >