Store Page
Arma 3 >  Workshop > vurtual's Workshop
This item has been removed from the community because it violates Steam Community & Content Guidelines. It is only visible to you. If you believe your item has been removed by mistake, please contact Steam Support.
This item is incompatible with Arma 3. Please see the instructions page for reasons why this item might not work within Arma 3.
Current visibility: Hidden
This item will only be visible to you, admins, and anyone marked as a creator.
Current visibility: Friends-only
This item will only be visible in searches to you, your friends, and admins. 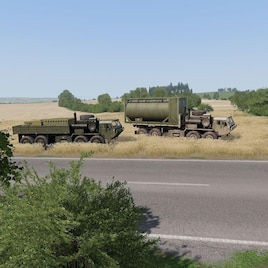 This item has been added to your Subscriptions. Some games will require you to relaunch them before the item will be downloaded.
In 1 collection by vurtual
Vurtual's Logistics Mods

The mod is partially modular in nature, and is divided into several PBOs:

boxloader.pbo: Adds cargo loading/unloading actions to the player, as well as the base framework for the other modules.

boxloader_fort.pbo: adds fortifications using a construction system, they can be transported with VIV, then built on-site using enabled "construction vehicles".

boxloader_pallet.pbo: adds empty pallets that can be loaded with cargo, and loaded into other vehicles. See note below.

boxloader_retrofit.pbo: Adds cargo support vanilla vehicles, as well as some mods, via "retrofits"; invisible custom objects that act as the actual VIV carrier, attached to the vehicle in question. See note below.

boxloader_tractor.pbo: a rudimentary port of the arma 2 tractor, with a low-poly bucket(construction vehicle) or forklift attachment. Useful for loading/unloading and building fortifications, if you have nothing else to do it with.

Retrofit vehicles rely on an attached invisible helper object, so any cargo loaded will be "stacked". Cargo loaded into pallets loaded into vehicles will also result in "stacking". Vehicles with native Arma 3 Vehicle in Vehicle support have their cargo attached directly to them, unless a pallet is used as an intermediary.

"Stacked" cargo will jitter back and forth when moving at speed. The AI gets confused when transporting stacked cargo. Aircraft transporting stacked cargo can explode. The "hide cargo" action will make the cargo invisible, preventing it from misbehaving. Both the "hide cargo" action and the retrofit system can be disabled in Boxloader's CBA options if desired.

My collection of vehicle mods designed around Boxloader.

Assassin King Oct 17 @ 10:48am
Ok if you don't know how to build or have any questions in this mod,i found a nice video to show this complicated stuff,this is the link: https://www.youtube.com/watch?v=NI7eWN9U7cE

Assassin King Oct 17 @ 3:55am
so...How can i use the "built" mode,i try any key and eligible vehicles,Include menu,just can't found built or something about boxloader_fort.pbo options,Many players and friends are also confused by this...

Ace Jul 11 @ 1:45pm
Hey is there any way to make custom vehicles count as construction vehicles?

For example, say I loaded this mod https://steamcommunity.com/sharedfiles/filedetails/?id=2830582579 and wanted this to be a construction vehicle for the purposes of your mod.

BobthePengu May 9 @ 8:27pm
Note: After going through various mods, I have discovered that DCO Vehicle.FSM - Vehicle AI Enhancement is incompatible with this mod and will cause loadable objects to have their addactions removed (i.e. you will not be given the option to load objects onto vehicles). Have a good day!

Astrid Apr 10 @ 1:26am
any plans to enable ace carry for un built fortifications so they are easier to place?

Sir. Polaris Mar 27 @ 11:23am
Is the forklift expected to have any control features?