Store Page
RimWorld >  Workshop > FrozenSnowFox's Workshop
This item has been removed from the community because it violates Steam Community & Content Guidelines. It is only visible to you. If you believe your item has been removed by mistake, please contact Steam Support.
This item is incompatible with RimWorld. Please see the instructions page for reasons why this item might not work within RimWorld.
Current visibility: Hidden
This item will only be visible to you, admins, and anyone marked as a creator.
Current visibility: Friends-only
This item will only be visible in searches to you, your friends, and admins. 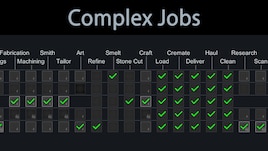 This item has been added to your Subscriptions. Some games will require you to relaunch them before the item will be downloaded.
In 1 collection by FrozenSnowFox
[FSF] FrozenSnowFox Mods/Update Info 1.3

26 items
Description
Announcement
Changes to the work tab can cause save breaking issues for some people. If you are one of these people you will likely require a new game if you want to add this mod. This legacy version will only be updated on major updates for Rimworld that tend to break saves/mods (eg 1.0, 1.1, 1.3).

Description
The original work priorities leaves a lot to be desired when it comes to prioritising jobs. This mod breaks down existing jobs into smaller jobs allowing you to make things run smoother and more efficiently. Below is a list of the new jobs you can assign people to.

Nurse
- Care for the sick, bring them food, cheer them up, and perform assigned duties. Nurses will care for colonists, prisoners and animals.

Refuel
- Refuel buildings/objects that run off fuel sources like wood or chemfuel.

Butcher
- Do bills at the Butcher Table.

Drugs
- Do bills at the Drug Lab.

Smith
- Do bills at the Smithy.

Refine
- Do bills at the Refinery

Smelt
- Operate smelters to melt down slag or weapons.

Cremate
- Strip bodies, do bills at the crematorium and burn apparel/drugs/weapons at campfires.

Compatibility
Changes to the work tab can cause save breaking issues for some people. If you are one of these people you will likely require a new game if you want to add this mod. This legacy version will only be updated on major updates for Rimworld that tend to break saves/mods (eg 1.0, 1.1, 1.3).

This mod should be loaded last in your load order. It should be compatible with other mods providing they don’t reconfigure jobs like this one does. It should work fine with Fluffy's Work Tab though.

Mod Support
Below is a list of supported mods.

Can you do X?
I can’t make any sort of options menu or mod settings so please don’t ask. My knowledge for Rimworld modding is limited to editing xml files. I have a little experience in scripting stuff but at this time I have no desire to try to learn how to mess around with code to get it to do things.

I don't intend to upload this mod in smaller pieces. I don't really intend to change how the job setup is done but I am open to suggestions on improving it.

I don't intend to do any major mod support. There's thousands of mods and I have no intention or desire to add support for all of them. However I have added patches for a number of mods.


If you enjoy my mods and want to give me a little tip check out the link below.

FrozenSnowFox  [author] Jun 13 @ 12:54am
@se05239
That's incredibly weird. I'm afraid an issue like that would have to be solved on their end. My mod is entirely xml based and it simply adds new work types and shifts tasks around. I'm not sure how or why a race mod would mess with work type priorities.

se05239 Jun 13 @ 12:48am
The Arachne (continued) mod seems to break this mod. Everything gets forced into a 1 priority and you're unable to change. Removing the Arachne mod will solve the problem.

Lex_Ms Aug 13, 2021 @ 10:41pm
So after reloading the colony, the issue haven't occured again. Maybe it was the reload or the language switch for picture taking. Thank you for the fast reply :)