OUTSIDER
500 XP
My pronouns are bruh/bruh

Bruceschetta
In-Game
The Beast Inside 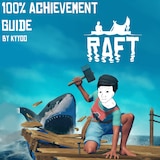 Raft
This guide will tell you everything you need to know in order to get 100% of the achievements in Raft without glitching or abusing mechanics. This guide is up to date for Update 11. I will continue to update this guide as new updates are released for the g
Review Showcase

Dishonored 2 is Bethesda's answer to the question, "What would happen if the Dishonored DLC was turned into a full game?"

Dishonored 2 sees a departure from the oil painting streets of Dunwall into the water coloured city of Karnaca. The graphics are significantly improved this time around which can cause even high-end computers to chug. The world is much more immersive this time around and it can be easy to get distracted while exploring the detailed, but still closed, levels.

You can choose to either play as Corvo, the protagonist of the first game, or Emily, his daughter. Both protagonists are voiced and each have a unique set of magical powers that reflect their personalities and role in the world.

Powers have also been expanded in this game. Not only does Emily have a quine set of powers from Corvo but both Corvo and Emily's powers have small upgrade trees for each ability. There is bone charm and rune crafting for both playable characters which allows for even more customization.
Dishonored is a series that prides itself on player choice and the sequel has done a lot to improve on that.

Among the things that Dishonored 2 has taken form the DLC of Dishonored 1 is the story. If you have not played the Dishonored DLC, Knife of Dunwall and Bridgmore Witches. you will be left in the dark about a lot of important information. There will be characters whose presence are not explained and story beats that wont make sense. If you have played KOD and BW, you will here the same things repeated over and over, plot twists will fall flat and you will be bored of the redundancy by the end. Dishonored 2 does its best to expand the history and lore of its characters and the world, however, what the game doesn't understand is that some questions are better left unanswered.

For the achievement hunter, Dishonored 2 is significantly easier than its predecessor. The Dunwall Trials are not present in 2, making the checklist of achievements far easier to achieve. All 50 achievements can be acquired through a minimum of three playthroughs.

The game has great replayability, like the first game, but having multiple playable characters and a wider set of powers improves on this even more.

Also in following the footsteps of the first game, the mission structure is almost a bit too similar. 9 missions, the first with no powers, a mission about the gangs, and a mission taking place at Dunwall tower. The Final mission of Dishonored 2 was a great moment and did not feel, as I expected, like cheap fan-service to the first game. Rather, it felt like a grand finale, finishing the series where it began. If you played Dishonored 1 then this mission was a great test of your memory from the first game and it felt like you were actually in the shoes of Corvo/Emily, finally returning to your home.

A similar structure to the first game results in a similar major flaw, however. The game is too short. It feels like you are just getting all of the fun powers to play with and then the game is over. Arcane Studios did recognize this problem but instead of making a longer main game, a New Game + mode has been added for continued play after the ending.

Cons
Will not run on low end systems
Leaves unfamiliar players with too many questions
Story/missions is too similar to the first game, feels like a retelling of the DLC
Too Short

How to become Chivalrous (The Chivalric Code)
By kyyoo

fishlick Apr 5 @ 10:09am
Thanks so much for subscribing to my mod "Realistic Skyrim Mommy Milkers Boob Physics and Nudity"! I noticed that you're still rocking my "Skyrim Babe Futanari" mod! Thanks so much for your support!

koomorang Nov 16, 2018 @ 10:08am
hey man, just wannted to tell you that i love your seige guides even tho i dont play thge game. its trully nice to see someone with real humor as opposed to the ♥♥♥♥ that these 12 year olds posing as adults laugh at these days

i think its funny in its own way. igrnore those bastartd who say that you post is trash. your posts is good and you give us the community something to read and laugh at while waiting
for other people loading their game on rank

thanks for your service and hope you got an ez killl