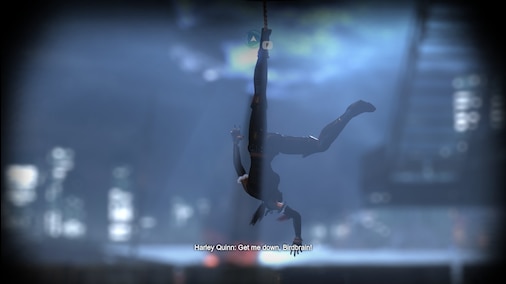 Harley Quinn on a rope

Star Trek Online
11.1 Hours played
I just started to play this and have been very surprised at how fun it is. Though at level 2 I found a bug that prevents me from playing any more. You beam down to the Academy after doing some space tutorial missions and my ability to beam back up to my ship was missing. I searched the hud for a good long while and found plenty of buttons to buy stuff at thier store, but no way to get unstuck. There's also a transwarp feature that was greyed out. Effectively imprisioning me at the academy.

I attempted to ask people how to get back but was all but ignored in local. I attempted to use the Zone chat and found that unless you give them money, you can't use this feature. I had to make a hot chick character in order to get the Star Trek community to even acknowledge me. I learned where the Beam Up button was supposed to be. Which it was not.

I went to the forums and found that I could not post because I was new. I looked to see if anyone else had this issue and sure enough I found posts that were from years ago that had this same issue. From what I can tell there has been loads of content created for you to buy, but bugs like being forever stuck somewhere have not been fixed in years.

I've submitted GM tickets in the game and on thier website but I am doubtful that it will be responded to since it has nothing to do with thier store.

It's too bad they don't support thier players. It was fun while it briefly lasted.

EDIT:
I was wrong, GM's did in fact send an email response. Here is the response to a 3 year old progression stopping bug.

Thank you for contacting us. We are sorry to hear that you are having issues with beaming out of Starfleet Academy.

Unfortunately, with being such a new Character, if you get stuck within these first few missions, you may need to re-create your Character. We also advise following the tutorial in the order it was presented and refrain from deviating from any of it until you have finished all the tutorial missions. In addition to that, please let the cinematics (if any) run to the end to ensure that the mission updates correctly.

Once you get to Earth Space Dock, please be careful not to beam back to the Academy avoid this issue again.

We truly apologize for the inconvenience this has caused."
===


It makes me wonder if a max level character that runs into a bug like this would have to delete his character and start over as well.
View all 4 comments
Favorite Game