We've just rolled out an update to the platform traffic reports, with the goal of giving game developers better data and visibility of the impressions their games are seeing on Steam.

Developers may find this tracking by visiting their app’s landing page in Steamworks, clicking on "Marketing & Visibility" and then selecting the "Store & Steam Platform Traffic Breakdown" tab.

We also discovered and fixed two issues that were causing some over-reporting of page visits (more details below). While we hope developers find the new features and improvements introduced in this update to be useful and help them market their titles, we know that seeing any reported reduction in page views is not happy talk.


Improved Categorization
Today's update also cleans up and properly categorizes a number of traffic sources that developers found confusing and/or were simply lumped together in incomprehensible categories.

The most notable changes are:

Bug Fixes & Data Cleanup
When working on cleaning up the categories, we identified two sources of spurious data, resulting in page view events that were not actually the result of a customer viewing a game page.

Before we get into the details of those issues and how they affect the page view numbers, it’s important to note that when we reference “page views,” we are specifically referring to views of a game’s store page. Conversely, when we say “impressions” we are referring to every other type of impression on Steam (front page capsules, tags, pop up messages, etc.).

While some of the fixes made in this update will cause a reduction in reported page views, the resulting reported page view numbers are now a more accurate representation of how many customers are visiting a game’s store page. Meanwhile, we did not find any inaccuracies with reported impressions, so those are not affected.

Here’s more detail on those issues and the resulting effects:

As we mentioned earlier, as a result of these two fixes many games will see a drop in reported page views as of May 1st. However total impressions for a title, as well as actions like Wishlisting and purchasing is unaffected.

About Traffic Reports
With a dynamic store that is personalized for each player, we know that the question “where is my game appearing?” could potentially be unclear to developers. So, in 2014 we rolled out Steam traffic tracking and reporting dashboard for each game so developers could see exactly where and how many times their game appears to potential customers throughout Steam. Developers may find this tracking by visiting their game's landing page in Steamworks, clicking on "Marketing & Visibility" and then selecting the "Store & Steam Platform Traffic Breakdown" tab. 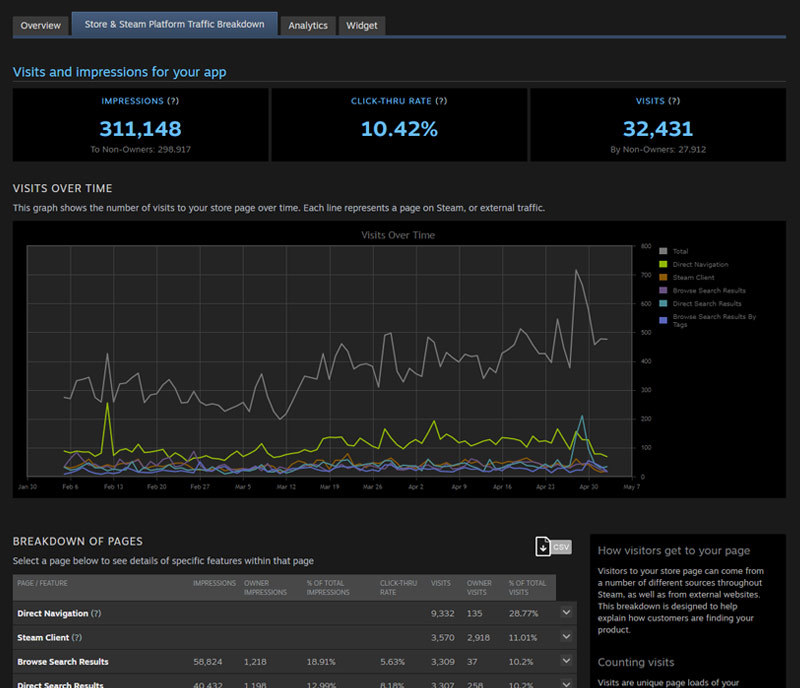 We hope you find these new categories useful for understanding how the Steam store and platform are working to surface your game and where players are discovering and engaging with your game. If there is more data you would find useful in these reports, please let us know in the comments.

A collection of great tower defense games on sale!