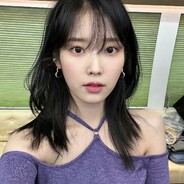 IU (아이유) is a South Korean solo singer and actress. She debuted on September 18, 2008 under Kakao M (formerly LOEN Entertainment). On January 6th 2020, it was announced that IU has now signed a contract with EDAM Entertainment.

IU Facts:
– She was born in Seoul, South Korea
– She has a younger brother.
– She attended Dongduk Women’s High School.
– IU worked hard to overcome a poor background
– When she was a child, IU’s family lived in a small one-bedroom place for a year, where cockroaches roamed around.
– She was in the 7th grade when she officially decided to become a singer.
– She failed an audition at JYP but got into Loen Entertainment.
– Later, mr. JYP said that he was going to fire whoever let IU go.
– She started as a trainee for Loen Entertainment in 2007.
– She released her first album ‘Lost and Found’ on 24 September 2008.
– She’s known for being very nice to her fans. A student fan who spotted IU at a restaurant said she gladly welcomed her and gave her an autograph telling her to stay healthy and study hard.
– IU is best friends with Suzy and with Jiyeon of T-ara.
– Suzy’s younger brother in an interview said he’s a fan of IU.
– IU is also best friends with actress Yoo In Na.
– IU is also close to APink’s Eunji.
– She loves reading books, listening to music, and browsing internet.
– She is more comfortable when she is alone and gets dizzy when she’s in crowded places.
– She has many ahjusshi fans. (Older male fans)
– Instruments: Guitar
– Her favorite color is Purple. (Interview with DINGO)
– Her favorite foods are Raw Fish and Sweet Potato.
– Her favorite number is 8.
– IU likes to eat raw liver.
– She likes a cool weather.
– She revealed that the song “Dear Name” is (so far) the hardest for her to sing.