Store Page
Sid Meier's Civilization VI >  Workshop > Elden's Workshop > Better Balanced Game 4.8.3 (BBG) > Discussions
This item has been removed from the community because it violates Steam Community & Content Guidelines. It is only visible to you. If you believe your item has been removed by mistake, please contact Steam Support.
This item is incompatible with Sid Meier's Civilization VI. Please see the instructions page for reasons why this item might not work within Sid Meier's Civilization VI.
Current visibility: Hidden
This item will only be visible to you, admins, and anyone marked as a creator.
Current visibility: Friends-only
This item will only be visible in searches to you, your friends, and admins.
Better Balanced Game 4.8.3 (BBG)
Description Discussions10 Comments185 Change Notes 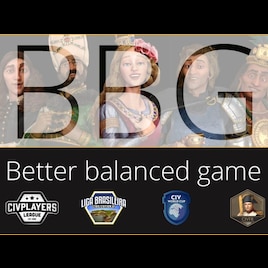 Want to join the discussion? You need to sign in or create an account.
Date Posted: Apr 1 @ 7:11pm
Posts: 1
Start a New Discussion
Discussions Rules and Guidelines
More discussions

1
Does this mod improve or change AI?

Apr 1 @ 7:11pm
Mods shouldn't update for April fools
First of all, people really need to calm down and stop harassing the developer for a joke that went somewhat wrong. It's not a reason to be hateful, rude or otherwise nasty. If you're losing your mind over this you really to go for a walk outside.

That said, I agree that mods shouldn't push updates for something like April fools. It's unnecessary and, as we've seen, it can have rather annoying unforeseen consequences. It's not fun to suddenly not be able to play the game. At the very least, perhaps one could expect to limit any April fools tomfoolery to parts of the mod that don't require changing anything about the mod itself (i.e. the mod page).

Over at Play Your Damn Turn, we are reverting turns. So hearing this is a plus. Just would have been nice to have heard it sooner and in a more official way. Patience is fine without confusion. Hopefully the players won't abandon games which are tens of hours of their time.
Last edited by Valamas; Apr 2 @ 2:53pm
#1
< >
Showing 1-1 of 1 comments
Per page: 1530 50