Store Page
Space Engineers >  Workshop > Ash Like Snow's Workshop
This item has been removed from the community because it violates Steam Community & Content Guidelines. It is only visible to you. If you believe your item has been removed by mistake, please contact Steam Support.
This item is incompatible with Space Engineers. Please see the instructions page for reasons why this item might not work within Space Engineers.
Current visibility: Hidden
This item will only be visible to you, admins, and anyone marked as a creator.
Current visibility: Friends-only
This item will only be visible in searches to you, your friends, and admins. 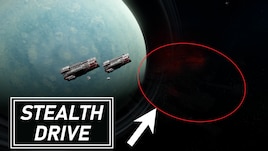 This item has been added to your Subscriptions. Some games will require you to relaunch them before the item will be downloaded.
Description
News
Thanks to a tip from a commenter I discovered how to dynamically hide armour edges, so they are no longer completely disabled when this mod is loaded. You may notice some differences in appearance, especially during stealth fade in/out.

This had the side effect of making stealthed grids far too visible to clients with Anti-aliasing turned off (default on low graphics), so grids will now be completely invisible if you have Anti-aliasing disabled. I recommend having it on for best visuals.

Also thruster flames are now hidden by default! You can disable this in config if desired; I am also considering increasing heat buildup while thrusters are firing but extending base stealth duration to compensate.


I've added a basic API for use in both PB scripts and mods. I'll probably add more options to it later if requested.

Weapons are now disabled while cloaked! WC weapons will still show as online, but WC itself will sleep on cloaked grids. Again, this can be turned off in config.

Shields are now disabled while cloaked and for 5 seconds afterward. This can be customised or turned off in config.


Overview
This mod adds the stealth drive to the game, allowing ships to become almost invisible and undetectable by weapons. It also contains heat sink blocks, which allow ships to remain in stealth for longer before needing to drop out to vent accumulated heat.

This mod is intended for use with WeaponCore; WC weapons will not be able to detect or lock onto ships in stealth. I'm not currently planning on trying to make this work the same way in vanilla, as there is no easy way to tell vanilla weapons not to target something.

I decided to add a feature to at least prevent vanilla turrets from automatically targeting cloaked grids; this won't stop players from being able to bring up a reticle on you and lock onto your ship, but it will have to do for the moment. At least it will let you sneak up on NPCs :)

I do plan on making improvements and potentially adding more features over time; if you encounter any bugs please let me know in the comments or ping me in the WeaponCore discord.

Please note: As I have been unable to find any way of dynamically hiding amour edges, this mod removes them altogether, in the same way as the "Edges Be Gone!" mod. It would be wonderful if someone could find a workaround for this, but until then I'm afraid this mod has to completely disable edges.

The power required to enter stealth is proportional to the surface area of the stealth field, while the stealth duration is dependent only on the number of Heat Sink blocks on the grid.
When stealth is disabled, either manually or by time running out and the heat sinks needing to discharge built up heat, the drive will go into cooldown for the same duration that stealth was active. While cooling down, a heat signature will be visible to players within a distance proportional to the drive's power consumption.

Heat Sink
Accumulates heat produced during cloaking, venting it into space afterward. While heat sinks are not strictly necessary for cloaking, the drive itself can only store a limited amount of heat and thus cloak time is limited without additional heat sinks. These can be placed anywhere on the grid without needing to be mounted on the drive directly; it is recommended to mount them externally to prevent the discharge of heat from vaporising parts of your ship!


Tips
Thruster flames and lights will still be visible, so you may want to turn off lights while running dark. You can also pair this mod with the Recolorable Thrusters mod to allow you to tune your thruster output to be more stealthy. Or you can just turn your thrusters off and coast for maximum realism!

Certain paint schemes will also enhance the optical camouflage of your ship, as sharp eyed players may be able to make out the glint of brightly coloured armour even through stealth.

You can have multiple stealth drives on your ship at once, but only one of them will be functional at a time. Heat sinks however are only limited by PCU, so if you want you can make a pure stealth ship that can go invisible for long periods of time, but is only very lightly armed (or not at all).


Configuration Options
The mod will generate a config file inside your world's save folder. The path should be something like this:
\AppData\Roaming\SpaceEngineers\Saves\76561198140591171\...
...\MyWorld\Storage\2805859069_StealthSystem\

Inside the file are the following configuration options:

FadeTime - Length of time over which stealthed grids will fade to invisible.

ShieldDelay - Time before shields are re-enabled after leaving stealth.

JumpPenalty - Time subtracted from remaining stealth duration when a jump drive is discharged.

DisableShields - Whether shields should be disabled while in stealth.

DamageThreshold - Amount of damage a stealthed grid can take before dropping out of stealth.

DisableWeapons - Whether weapons should be disabled while in stealth. If false, stealthed grids can fire weapons but will lose stealth if their weapons cause damage to anything.

⠀⠀Duration - Stealth time provided by the drive itself.

⠀⠀PowerScale - Power in megawatts required for drive to engage, in multiples of the grid's (and all connected grids') surface area.

⠀⠀SignalDistanceScale - Distance in metres the heat signature from the drive cooling down will be visible from, in multiples of the drive's power consumption.

⠀⠀Power - Power in megawatts drawn by heat sink while stealth is engaged.

⠀⠀DoDamage - Whether heat sinks should damage blocks/entities in front of them when radiating heat.

Note that all duration values are in game ticks, where 60 ticks = 1 second.

Credits
AryxCami for the Stealth Drive model 😀
DarkStar for all he's taught me and for allowing this to work with WC.
The_Swack for the thumbnail and other images.
jonn19 for making the OG stealth mod which inspired me to make this!
< >
189 Comments

Thane Greyhaven Nov 14 @ 6:22am
Even a 1x3x3 would be great for small grid. Adding the ability for heat vents to help out would make it even better.

TRX_Lucas Nov 12 @ 7:27am
the mod is perfect but it could have a giant block version because I can't put it on my ship

EpicPencil Nov 4 @ 4:02pm
This mod is super cool i needed a stealth mod for a ship i have, would you be able to make a smaller around 1x1 or 2x2 version?

ElPutisimoYisus Oct 31 @ 9:36am
It would be great if in the future you could add some countermeasure for that, there is already a thermal camera mod that allows you to see the grids even if they are invisible. It would be great to have something like that inside this mod and to have it balanced. Another option would be a radar that detects grids in a short range, or an inividor block that, when activated, deactivates the invisibility of enemy grids.

Thane Greyhaven Oct 22 @ 12:39pm
The size is impractical for small-grid. You can't help dissipate heat with heat vents. Power requirements aren't horrible. But as it is right now it's not worth it.