Store Page
Hearts of Iron IV>  Workshop > Paglia's Workshop
This item has been removed from the community because it violates Steam Community & Content Guidelines. It is only visible to you. If you believe your item has been removed by mistake, please contact Steam Support.
This item is incompatible with Hearts of Iron IV. Please see the instructions page for reasons why this item might not work within Hearts of Iron IV.
Current visibility: Hidden
This item will only be visible to you, admins, and anyone marked as a creator.
Current visibility: Friends-only
This item will only be visible in searches to you, your friends, and admins. 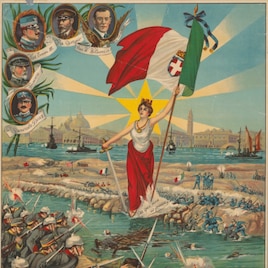 Paglia
Offline
See all 9 collections (some may be hidden)

This item has been added to your Subscriptions. Some games will require you to relaunch them before the item will be downloaded.
Description
Mod Version: 1.0.1 - "Avanti Italia"
HOI4 supported version: 1.9.3

Italy Rework - A complete rework for Italy
After a lot of time, I have finally decide to publish this mod. I know that there are a lot of other rework of Italy outhere, but I hope you can still enjoy my work!
I've been working on this mod for several month, during my free time, and I really enjoyed working on it, since it brougth me to make research and read a lot of stuff about Italy during the World War 2 period.
Well, I think it's enougth for the presentation, so let's talk about the mod:

What's the aim of the mod?
As the name of the mod said, the aim is to rework Italy and giving to it a brand new focus tree, since it has one of the worst in the game, adding new events and better rappresenting the country situation during the World War 2 period. All of this along the intentions to try to keep the balance of the game and also allow the player to go with different playthrough.
After said this, my principal objective was to respect, as long as i could, the history of Italy, and since the game is HOI4, it was a not so easy challenge, but i think that I've done discreet work.

What are the contents of the mod?
Compatibility:
Reporting a bug:
Please, when you report a bug, take in mind some things:
After said so, I really appreciate your segnalations, since this is my first seriously mod and I'm sure there will be a lot of error.

What are the future plans for the mod?
Well, my plans are to keep this mod updated as I can: I use to work on that when I have some time to spare, so I can't promise anything. Althougth this, I have some good stuff in mind which I'd like to add to the mod and provide some bug fixes.

Credits:
Some last words
Please be polite in the comments section. Constructive criticism is very useful, while insults lead nowhere.
If you want to use some part or all of mod in other works, please, ask me for permission before. I will usually respond with a yes, since if it wasn't for the community this mod will never be existed, but I'd like to know where this mod is going to be used. After that, just give me the credits for my work, thank you.
I think it's clear, but it's better to put it write down for being sure: don't upload this mod as your own.

Well, I think I've said everything, so I finally let you have fun with my mod!

s.stephens25 22 hours ago
will you be updating this mod?

Paglia  [author] Oct 20 @ 12:41pm
@Skip Thank you for your offer, but I don't need it. I've started to work to an update several weeks ago, but for lack of free time, I left it. Now that I have finally start to work again on the mod, I was planning to continue to develop that update, where I will change some parts of the focus tree and revisit many events, so I think that the bugs will surely show themself.
However, I want to thank you again, and I will surely let you know if I change my mind.

Skip Oct 18 @ 7:39pm
Hey there, I downloaded the mod and decided to fix some of the bugs so i could play it in mp with my mates, would you like me to send the files to ya?

Paglia  [author] Oct 18 @ 9:50am
Hi everyone, I just want to say some words.
First of all: thank you all for the 1000 subscriber! I'm really happy to have reached this milestone, and I hope I could give to you more and more hours of fun!
After said so, I've restarted to work again on this mod: I can't promise anything, but I think that I can release an update in two weeks.
For the ones who's asking: I've haven't tried yet, but I think that the mod could still work with the current version of the game, even though some small bugs will surely present. I'm just asking you to have patience, sadly I have limited time.
In conclusion, I want thank you again for your feedbacks and suggestions, I really appreciate them!