Store Page
Hearts of Iron IV>  Workshop > general.belisario's Workshop
This item has been removed from the community because it violates Steam Community & Content Guidelines. It is only visible to you. If you believe your item has been removed by mistake, please contact Steam Support.
This item is incompatible with Hearts of Iron IV. Please see the instructions page for reasons why this item might not work within Hearts of Iron IV.
Current visibility: Hidden
This item will only be visible to you, admins, and anyone marked as a creator.
Current visibility: Friends-only
This item will only be visible in searches to you, your friends, and admins. 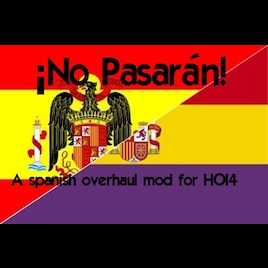 general.belisario
Online
See all 159 collections (some may be hidden)

This item has been added to your Subscriptions. Some games will require you to relaunch them before the item will be downloaded.
Description
Hi! I made this mod to fix the disaster that is Spain in vanilla game. Republican Spain a communist dictatorship? Franco an option in the elections? Come on!

NO PASARAN! is a complete overhaul mod for Spain in HOI4. It's main goal its providing realism and variety to any Spanish playthrough while also improving the overall historical accuracy of the world. The mod includes:

IN-DEPTH SPANISH POLITICS: Play as almost every political faction present in Spain in those troubled times, like socialists, falangists, anarchists, republicans and many more! With more than 50 events to add inmersion to Spanish experience such as The Replacement of Alcalá-Zamora, The Unification Decree, 1940 and 1944 election events, Crisis of the 37... Also added a lot of new parties and leaders to add realism, such as the CEDA with Gil-Robles, the Falange with José Antonio or the PSOE with Largo Caballero.

BETTER CIVIL WAR: Tweaked spanish map to reflect the historical split. Added an alternate civil war ( a communist revolution ) if the CEDA gets elected. More generals, events and unit names to get as much accuracy as possible!

NEW FOCUS TREE: +150 focuses, organized in 6 trees ( industrial, political, diplomatic, army, navy, air force ) with historical and ahistorical focuses and actions to take! Possibilities include forming the People's Army, demanding Gibraltar, creating a democratic league with France or a southern axis with Portugal and Italy, sending the Blue Division, dealing with the Church, enacting or rejecting the Agrarian Reform and more!

SPANISH LOCALIZATION: Translated completely into spanish by myself, it also fixes some general localization errors in the base spanish game.

CURRENT VERSION: 2.3 "Madrid"
Credits to portraits go to @CarefulPlum and credits of icons to @LukyLucaz
Don't forget to rate, report any bug and leave your thoughts and suggestions in the comments!
Russian Translation: https://steamcommunity.com/sharedfiles/filedetails/?id=1606113249
Popular Discussions View All (11)

I believe Paradox has already released the expansion for HOI4, La Resistance. As such, I'm afraid this mod might not possibly be supported at all since Spain finally has a focus tree of its own...