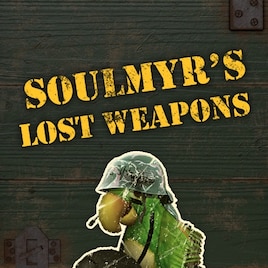 Serious Sam Fusion 2017: Jewel of the Nile
Required items
This item requires all of the following other items
Bullets to Projectiles (resource for modders + Flak Cannon)
Created by

Vanyarin
Online
See all 304 collections (some may be hidden)
You need DLC to use this item.

This item has been added to your Subscriptions. Some games will require you to relaunch them before the item will be downloaded.
Description
Current Pack Version: v1_3b -- Read the Changelog / Update Notes here!

TIP -- THESE AREN'T WEAPON REPLACEMENTS, THESE ARE FULL STANDALONE CUSTOM WEAPONS FOR MAPPERS/MODDERS TO USE IN THEIR CONTENT.

Basically he has given me permission to fix and re-upload these mods back to the workshop and from now on I'll be fixing them if they break again, any new weapons that he may make (if he makes more) will be uploaded separately from this pack, likewise, if I make new weapons of my own then they won't be included here.

This pack includes:Guns are and behave exactly like you remember them, I pretty much did nothing to them except fixing attachments and reuploading them.

Stats are displayed individually on every weapon if you use Custom Weapons Management, simply hold down Left Ctrl and hover over the weapon to get detailed information on them. (Damage, Type of projectile, etc.)

Credits for the custom animations belong to UrbanDeHuman, viper45, Soulmyr and myself (but mostly to Urban since at least 85% of these weapons are animated by him). Models, base textures and sounds belong to DICE, Ubisoft, Tripwire Interactive, Interceptor and Obsidian. Credits for the HD Arms rig belong to Rabbit.

Last and most importantly, credits for the ports, texture and stat edits and all that sort of stuff belong to Soulmyr as original creator, I'm only reuploading and fixing these with his permission.

DISCLAIMER: Soulmyr does NOT receive notifications from the comments in this workshop article, so please refrain from leaving comments asking him random senseless questions / requests / anything, notifications won't get to him and I won't ask him to come and read every comment.

If you want to include any of these weapons in your map but you feel like they are too weak / overpowered, feel free to do balance edits for your map (so long as they don't overwrite the original file) but don't forget to link this pack to your release!
However if something is broken then do let me know and I'll take a look at whatever the problem may be.

Bublik May 10, 2022 @ 10:55am
Hi!
Tell me, please, will there be critical errors if I do not connect the required mod?
"Bullets to Projectiles" - the author of the mod asks you to refrain from using it, as it is outdated.

Will there be errors when connecting players if they (or me) do not have the required mod?
Or maybe the players (or me) won't see someone else's server.
Bullets to Projectiles

insightguy May 6, 2021 @ 7:34am
A bit of a longshot but I wanted to ask, any chance you have the lost weapon mods of Spy's Cr3ed? I kinda missed some of them, specificaly the C4 High Explosive mod

These are weapon resources meant for mappers to add these weapons to their maps, since this addon does not contain any maps of any kind then that means you won't be able to find them in-game normally.

However, with the help of this mod https://steamcommunity.com/sharedfiles/filedetails/?id=889896163 you're able to change the weapons normally found in some levels to the ones included in this pack, instructions on how to use this mod as well as all the things that you need to download for it to work are included in that link posted up above.

Flynn May 24, 2020 @ 6:47pm
Apologies if I am not getting this at all, but are these added to the moddified version of the game at random points?
If I don't get this at all, I'm sorry but it was mostly curious.

Vanyarin  [author] May 13, 2020 @ 8:02am
Can't say I remember which weapon you're talking about. I am aware though that there's one or two weapons I did not include that are probably lost forever by now (weapons Soulmyr didn't send and which I didn't ask for when I was working on this pack).