Store Page
Stellaris>  Workshop > YeshuaAgapao's Workshop
This item has been removed from the community because it violates Steam Community & Content Guidelines. It is only visible to you. If you believe your item has been removed by mistake, please contact Steam Support.
This item is incompatible with Stellaris. Please see the instructions page for reasons why this item might not work within Stellaris.
Current visibility: Hidden
This item will only be visible to you, admins, and anyone marked as a creator.
Current visibility: Friends-only
This item will only be visible in searches to you, your friends, and admins. 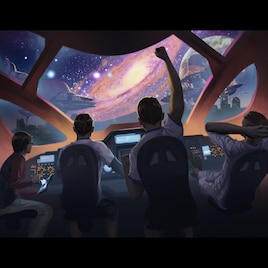 YeshuaAgapao
Online
See all 8 collections (some may be hidden)
You need DLC to use this item.

This item has been added to your Subscriptions. Some games will require you to relaunch them before the item will be downloaded.
Description
This is a personal fantasy setting mod with my StarView system and civilization. The core systems of my setting are StarView, Ankh, Moolnao, Dyson Sphere (a mostly complete but not habitable-finished dyson sphere), and Fantastica. The StarView system and the few remaining systems (not dismantled into materials for using in the dyson sphere) in the open cluster that they are a part of orbit outside the galactic disc just outside of its globular cluster halo.

The dyson sphere is not intended to be immediately colonized. You have to 'finish' it. 'Finish' is in the form of 25,000 energy, 50-year terraforming projects, per segment (there are 16, each a size-100 ringworld habitat). Terraforming pc_ringworld_tech segments (upgrade 4-colony built ringworlds to 8-colony, finish the dyson sphere) requires advanced megastructure engineering.

Multiplayer support: Only one instance of the starview extragalactic cluster is supported. Single player, or if multiplayer, only one player gets the cluster. Attempting to have multiple empires with the StarView system initializer will have undesirable results.

This is a personal fantasy mod being made available to the public. This mod has notable cheat factor to it if you use the StarView system intializer and country - the StarView race, country, home system and surrounding systems are quite advantaged. If you use the StarView system initializer, it is recommended that all AI empires be advanced starts (which are boosted in the mod) or it may be too easy to be fun. I have no intention of going out of the way to make it friendly with other mods. Many vanilla files are changed.

This mod incorporates pieces of other mods. All but one are not updated to 2.6.x (but were updated by me in this mod):
*Realistic Ships - only the 4-segment cruiser (battlecruiser) and 4-segment battleship (dreadnought)
*Useful stations - Only core bulwark and citadel stations and re-enablement of defense stations and defense fortresses
*Utopia expanded - Only the ascension perks and civics repeatable techs and ability to terraform ringworld_tech to ringworld_habitable, 12 ascension perks (4 from repeatable techs)

This mod meshes with tactical ship sections and additional ship components 3.0 with minor issues (aux reactor with realistic ships battlecruiser and dreadnought, main and aux reactor with bulwark & citadel). More issues with New ship Classes & More, but may be able to use it if it is sorted after this mod in custom load order. Music, flag, emblem, prescripted empire, UI / 1080p, hyperlane, expanded tradition, border, and galaxy map graphics mods all work with this mod no problem. Also generic event mods work if they don't alter game_start or crisis events.

Strongly recommended, but will work without. No longer integrated
UI Overhaul Dynamic - https://steamcommunity.com/sharedfiles/filedetails/?id=1623423360
84 Building Slots - https://steamcommunity.com/sharedfiles/filedetails/?id=1892802718
The changes to the defines to make additional buildings work are included

The cover-art is from a DreamChaser RPG kickstarter award (it was published in the PnP RPG rulebook). Artist is Steve Stark. RPG designer is Peter Petrusha
< >
15 Comments

**Existing prescripted empires, as well as StarView are updated for origins.

**36 buildings and bigger planet UI are no longer integrated. Strongly recommended to get UI overhaul dynamic and 84 buildings mods, but will work without.

*The starview cluster now spawns at all times. Mostly for comment request which I think I would like. An empire that uses the starview system initializer will start in it, and the cluster will have a wormhole connection to the original starting system and a hyperlane to an un-owned neighboring rim system. If no empire uses the starview system initializer, the starview cluster still spawns. With no external hyperlanes, and a natural wormhole to a random un-owned system in the galaxy that is not a hostile guardian, or empire_cluster marked system (accessible only by this wormhole or via l-gate).

Bug fixes:
*Dyson sphere will no longer be filled with blockers upon colonization
*Dyson sphere now has unlimited generator and agriculture districts

YeshuaAgapao  [author] Jan 20, 2019 @ 5:53pm
Somebody has to have the Starview system iitializer in order for it to spawn though (player or AI). I see if I can make it spawn without someone starting in it next version.

lorkhi Jan 20, 2019 @ 5:11am
Really good work and I would love to play in a cluster. Is there a chance of a sligthly less OP Version in the future? (No Megastructures and reduced resources?)

TurtleShroom Jan 19, 2019 @ 3:48pm
This Mod looks great, but how compatible is it? I want this in my galaxy, but I don't want to be moved or to play in it. Is there a version that simply fires an Event that spawns the star system once you begin playing?

YeshuaAgapao  [author] Jan 13, 2019 @ 6:44pm
Removed changes in last revision to distant_stars_events.txt to add extremely_intelligent to the trait list for enigmatic dreams (enigmatic cache uplift). May have broken mid-game save, despite no change to any of the ratling events in the same file, but I am on the 2.2.3 beta branch. distant_stars_events.txt vanilla file is no longer being changed.

ChristianHH87 Jan 13, 2019 @ 5:16am
the last ubdate broke the mod for me. it appear a window that "Ketling Plant Subdued". again and again. sorry for my English

The dyson sphere is not intended to be immediately colonized. You have to 'finish' it. 'Finish' is in the form of 25,000 energy, 50-year terraforming projects, per segment (there are 16, each a size-100 ringworld habitat). Terraforming pc_ringworld_tech segments (upgrade 4-colony built ringworlds to 8-colony, finish the dyson sphere) requires advanced megastructure engineering.

A fully built-out, enlightened, and terraformed StarView cluster will have 40 colonies - 24 planets and 16 ringworld habitats. 6 planets are 60+% habitable from the start. 6 other habitable planets. One primitive civilization. 11 terraforming candidates. One un-finished 16-segment 'dyson sphere'-ringworld.