Store Page
Total War: ATTILA>  Workshop > The_Yogi's Workshop
This item has been removed from the community because it violates Steam Community & Content Guidelines. It is only visible to you. If you believe your item has been removed by mistake, please contact Steam Support.
This item is incompatible with Total War: ATTILA. Please see the instructions page for reasons why this item might not work within Total War: ATTILA.
Current visibility: Hidden
This item will only be visible to you, admins, and anyone marked as a creator.
Current visibility: Friends-only
This item will only be visible in searches to you, your friends, and admins. 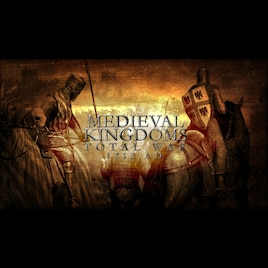 This item has been added to your Subscriptions. Some games will require you to relaunch them before the item will be downloaded.
In 1 collection by The_Yogi
Medieval Kingdoms Total War 1212

10 items
Description
MK1212 Campaign Open Alpha:
It's been over 5 years in the making across 2 games, but the Medieval Kingdoms 1212 campaign is finally available to all! Our Open Alpha phase starts today. The campaign as it stands is obviously in an incomplete state, missing technologies, naval units, and mercenaries, though we have plans to add much content in the near future. It currently includes 57 playable factions and various scripted mechanics, such as population and a pope system. The campaign release is also accompanied by a great deal of new content in the form of new factions and units, as well as revamped rosters for preexisting factions.

Annex Vassals: Diplomatically annex vassals who have been subjugated for 10 or more turns.
Buffer States: Release vassal buffer states from conquered territories where your direct control may be tenuous.
Crusades (Currently only the 5th Crusade): Travel far from your homeland to retake the Holy Land, in service of God or perhaps in search of glory and power.
Decisions: Enact decisions that can affect your ruler or your realm.
Dynamic Faction Ranks: Any faction in the campaign can grow from a county to an empire.
Population: Cities now have population, which directly affects their squalor levels and economy. All non-mercenary units require population of their respective classes to recruit.
Frontend Overhaul: The frontend has been overhauled with changes such as a Grand Campaign start date selector (currently only 1212 AD is available), a modified faction selection screen, and increased room for factions in custom battles.
Story Events: Various factions have scripted story events, offering unique challenges for certain factions.
The Pope: Catholic factions may find themselves with a thorn in their side in the form of His Holiness himself. However, those who placate the pope may receive certain boons.
War Weariness: Returning from Age of Charlemagne but modified to suit the needs of MK1212, War Weariness encourages shorter and fewer wars.
World Events: The world itself will not stand idle as you progress through the campaign. Invasions, great plagues, famines, and climate change can all ravage the land.

College of Cardinals: Papal elections
Holy Roman Empire System: Will be released in the near future.
Mercenaries: A few factional mercenaries are implemented but the rest will be implemented in the near future.
Naval Battles: These are still W.I.P. as they utilize custom ship models, but show promising signs so far.
Post-5th Crusade Crusades: The Crusades mechanic will eventually be expanded upon to include new events and crusades after the 5th crusade.
Republic Mechanics: Political and trade mechanics are planned for the Italian merchant republics.
Technology trees (currently only partially implemented): Once complete these will unlock T2 and T3 units for play in the campaign.

Q: Are any DLCs or other mods required?

A: No DLCs are required, but to properly play the campaign you will require Model packs 1-6, and the Script pack. All of these are listed as required items in the base pack's workshop page. If you so choose, you can also use the optional music mod, located here. Lastly, there is a UI sound replacement mod, but due to the nature of its implementation it cannot be uploaded to the workshop. Simply download the .pack file from ModDB and place it in your Total War Attila/data folder and it will automatically load in when you launch the game (does not appear in the mod manager). To disable its use just move it somewhere else or delete it.

Q: Why are there no medieval buildings yet?

A: Our efforts so far have been focused on designing the campaign and fleshing out unit rosters. Once these tasks are done, the focus will shift to battle maps and campaign map settlement models.

Q: Can the campaign map be modified to add new regions? And why are some regions not in the right place?

A: As there are no official campaign map modding tools aside from Terry (which mostly does cosmetic changes), campaign map editing is next to impossible until methods of doing so are discovered.

Q: Are you looking for any help with the mod?

A: We are currently looking for anyone who can do 2D art for the UI, as well as building modelers and anyone with experience in battle map editing for Total War titles.

Q: Are there plans for another start date?

Q: When will mercenaries, naval units, etc. be added?

A: When they're ready.

Q: The Campaign Faction Selection are broken! It only have 1 row under "Balticum et Ruthenia"!
Subscribe to Medieval Kingdoms 1212 Scripts and activate it.

MohSy 2 hours ago
I'm surprised the Seljuks, Ayyubids, and Abbasids haven't even been addressed yet about their completion timeline.

RuskieBusiness 6 hours ago
@twilightgraphix15
None of the factions have their intended features, some just have a few more events and units then others

twilightgraphix15 6 hours ago
what is a good faction to play as is while i await the HRE system or the republic mechanics. one that has almost of its intended features

AlexDv97 13 hours ago
Aragon will be revamped, they're already done actually according to trello.

BlissDefiler Mar 28 @ 4:52pm
Why doesn't aragon get archers when there's nothing special about their "heavy infantry," which is supposed to be the trade off for not having archers? And when is some navy going to be included - who cares if they can't include real time naval battles (barely anyone fights those anyways) just put some unit cards on some Attila naval units and let us have navies.

The guard captain Mar 28 @ 2:02pm
hey late campaign is out but why does it have the visigoths and ostrogoths and why does it say purchase campaign

fercantosprieto Mar 27 @ 8:22pm
Hi, first of all thank you for this amazing and impressive mod (game?). Just a question and a suggestion:

Q: How does the Pope/Crusades system work?
S: Revisit the location of some cities: Valencia is on the coast and Granada is surronded by mountains. I am trying to do a Reconquista and this kind of pulls me out of the game when playing there.

But congratulations, and thanks for this Medieval III gift!

Ignaeon Mar 27 @ 4:12pm
Sorry if this was asked before, there are a LOT of pages for this comment section, but is there a single global variable I can change somewhere in the mod to alter population growth? Mod added population, that is.
< >