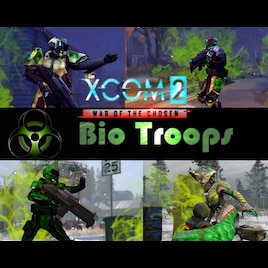 sacred soul
Offline
See all 2308 collections created by MrShadowCX and other people (some may be hidden)
You need DLC to use this item.

BIG THANK YOU to Claus and Musashi for the base mod code for the shields.

This mod adds 6 new enemies to the game. These enemies are Bio (Acid/Poison) themed.

BIO TROOPER: The Bio Trooper is a slightly stronger Base game Trooper that has a M1/M2/M3 veriant. They first start showing up at force level 1. The Bio Troopers act just like the Base game Troopers except they sport a Bio Mask, have their own unique color and texture to them. They are Immune to Acid and Poison Gas. The M1 has a Gas Grenade where as the M2/M3 has a Acid Grenade they will use. They also have a 10% chance to drop these type Grenades as a Base loot along with their (Trooper Corpse). As of now, they do not count as a new trooper type for Corpse droping and will still drop a Base Trooper Corpse. So no special Autopsy.

BIO ASSAULT TROOPER: The Bio Assault Trooper is a mix of the Stun Lancer and the Shield Bearer. They only have an M2/M3 veriant and will start showing up at force level 8. They also sport the Bio Mask and a new look. The Bio Assault Trooper does NOT have the Shield Bearer shield ability but does have more HP, Armor, and will rush you to use his Stun Lance like the Stun Lancers would do. They too are Immune to Acid and Poison Gas. They also have the abilty to regenerate 2HP a turn if damaged. They Also have a Base loot drop that at a 10% chance, could grant you a Advent Nano Scale Vest that grants 2HP and 2 Armor. The Bio Assult Trooper now has a autopsy and research that grants the ablility to build Advent nano Scale Vests. These guys now sport Shotguns insted of rifles. The closer they get, their % to hit goes up (max of 10%) to a (max -10%) at distance. And also have blast padding.


BIO VIPER: The Bio Viper is an advanced version of the Viper. She has a new look and texture with new armor(look). She will start to show up at force level 7 along with the Bio Troopers. She can still spit Poison and Bind. However, she does NOT have the tounge pull of thr Base Viper. Her Poison Spit is now called Toxin Spit. It still poisons BUT!! when it does hit, it not only does the poison damage but will also blind anyone it hits for 2 turns.

The Bio Viper does have 1 pip of Armor, more HP and agility than the Base Viper, so she will be harder to hit. If she has you bound, please use those Stun grenades to get her to let go of your soldier. If she has someone bound and you do damage to her, she now has a Bio Acid Blood defense. She will spew Acid Blood around herself in a 3 tile radius. She will do this any time she takes damage. She will also explode on death much like an Acid grenade, dealing Acid damage around her.

The Bio Viper does however have an Autopsy that when completed will open up a new Bio Scale Vest that can be built at will like the Nano Scale Vest (provided you have a corpse and other items to build one).

BUT... the Bio MEC has a 5% chance to drop a Bio Blaster Launcher when killed. If you gain one (this is the only way to gain one) the Xcom version is JUST AS STRONG as the XCom Blaster Launcher, and has a 4 tile blast radius over the Bio MEC's version of 3 tile radius. The Bio MEC counts as a MEC corpse when killed. And will start to show up at FORCE LEVEL 13, which is 1 force level after the Heavy MEC, but is set to show up less than the Heavy MEC.

BIO CAPTAIN: The Bio Captains like the base game Captains, will show up throughout the game. The Bio Captains like the other Bio Troops, sport a unique look and new weapons. The M1 Bio Captain comes with a Gas Grenade and a SMG weapon. This SMG grants a higher % (up to 10%) chance to hit the closer you allow him to get to you. BUT also has (up to a -10%) chance to hit if hes firing at you from a greater range. The M2/M3 Bio Captains come with Acid and Mk2 Acid Grenades and have a BIO SABER Sword. when used, this swod does slightly less damage than a Stun Lancer Sword... BUT will do Poison damage (if you are not immune). On top of that, the Bio Saber has a Toxin Slash that when hit by, has a chance the Toxin will do neurological damage. This could add Stun, Disorient or Unconscious from the effects of the Toxin in the blood stream. So try and keep these guys at a distance. Thes captains do not play defensively like the based game Captains. They are built around offense. The only real defense they have is that they. like Rangers, can and will use BladeStorm on anyone that gets too close. The Bio Captains also have 2 more HP than base game Captains. Bio Captains can alos drop the Grenade types they use, as a special loot drop and can drop Advent Data Pads.

Premier666 Aug 13 @ 10:01am
Had to uninstall. After a certain force level, bio troops completely take over pods, to the point where every single reinforcement is nothing but bio troops, and about half of advent pods are bio troops.
Absolutely kills enemy variety. Doesn't help that bio troops are considerably stronger than regular troops so it also messes with the game balance.

Premier666 Jul 8 @ 5:36pm
Love the mod but I do feel like it tends to overcrowd the spawn list somehow.
For example, during a defend the avenger mission, the enemy reinforcements were nothing but biotroops non-stop.

4rrakis Feb 27 @ 2:15am
Fun fact: "We need" and "I want" are different things! Also , you can check out Bio Operative and Alchemist classes. Bio Operative starts with a flamethrower that gets poison and acid later, Alchemist can choose between different chemthrowers if you add the right mods listed in the description. Oh, and Grimy's classes includes the Anarchist class which uses a primary grenade launcher and specializes in fire, poison and acid, but only starts with a gas grenade, you would have to get the other ones first.

Gladiator Feb 26 @ 7:27pm
We need a Bio class only mod for our soldiers. Class that allows flamethrowers, poison, acid.

I used Mushashi RPGO to create my own soldier with these perks which was awesome but I don't like most of the other changes RPGO does to the game. So I uninstalled it.

So, can we get a class only mod which allows our soldiers to use fire (LW2 weapon gauntlets does that), poison and acid abilities and grenades from start ?.

Sednovia Nova Feb 13 @ 1:39am
Wondering if the armor could become available as a armor set as an update. Would be great. Hope your doing well this year.

gavral Apr 15, 2020 @ 9:52am
I have to say that this is very hard to fight, I had a fully healthy team of four, 3 of them having ballistic shields, get killed by a single pod of these because in one turn my entire squad was blinded, poisoned, and taking acid burn, so i was taking four damage a turn just from status effects, and i couldn't fight back.