Greenlight > Games > freakyforest's Workshop
Greenlight is being retired. For more information on how to submit games to steam, refer to this blog post.
This item has been removed from the community because it violates Steam Community & Content Guidelines. It is only visible to you. If you believe your item has been removed by mistake, please contact Steam Support.
This item is incompatible with Greenlight. Please see the instructions page for reasons why this item might not work within Greenlight.
Current visibility: Hidden
This item will only be visible to you, admins, and anyone marked as a creator.
Current visibility: Friends-only
This item will only be visible in searches to you, your friends, and admins.
Race the Sun
Description Discussions15 Announcements25 Comments788 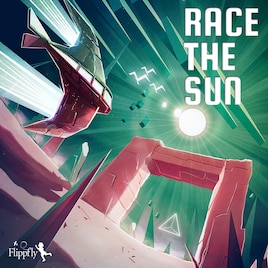 freakyforest
Offline
See all 89 collections (some may be hidden)

View Race the Sun in the store

We are happy (read ecstatic) to announce a Steam release date for Race the Sun. Here's a post about where we've come from and what to expect: http://flippfly.com/news/race-the-sun-coming-to-steam-december-9th/

As part of the "Not on Steam" sale Flippfly is hosting, we have made RtS 50% off until October 9th. Get it now, and get a free Steam key soon!
http://flippfly.com/racethesun/

The Core Game
You are a solar powered craft, racing against the sunset at insane speeds. You navigate a procedural landscape that changes every day collecting speed boosts to go even faster and momentarily reverse time. The goal is to increase your score and survive as long as you can without running out of daylight or smashing into pieces.

Once I played it I was totally hooked
- Tom Chick (QuarterToThree.com)

The game is nerve-wracking and oddly relaxing at the same time.
- Tuong Nguyen (Cnet.com)

...the sky's the limit when it comes to user-created content.
- Ben Kuchera (Penny Arcade)

The feature that really stands out is the world creator, which lets you create, manipulate and program objects with minimal effort.
- Phil Savage (PC Gamer)

It’s all about getting that high score, and it’s an oddly compelling experience.
- Chris Priestman (IndieStatik.com)

...you will want to keep going back over and over again.
- Nathan Carter (GamingNexus.com)

...a sleek experiment in community driven content that will ship with powerful tools and inspired multiplayer options.
- Konstantinos Dimopoulos (IndieGames.com)

Game Details
THE SIMPLEX WORLD CREATOR
The world creator is included right in the game and allows anyone to make unique new game modes (or modify existing ones) and share them in a special user worlds screen for all to see. Unique interactive objects can be created, styled, and animated right in the game - with no programming knowledge. These can be simple things like falling blocks, or more detailed things like a flock of birds or a flying rocket - it's totally up to you!

CO-OP MULTIPLAYER
You can team-up with other players in an asynchronous relay race. Here's how it works:
When your round ends, you can invite other players to carry on from where you died. This creates a sharable hyperlink that allows another player to pick up where you left off. When they die, they are able to share a link, and so on, and so forth. This process continues until 4 runs have been completed, at which point your team's combined score is posted to a special leader-board.

OTHER FEATURES
Along with the player-created worlds, the game includes an extremely difficult world called Apocalypse. There is as a deep player leveling system with tons of objectives and 25 player levels to unlock. As you unlock items, you can customize your ship with attachments like faster turning, protective shield, and decals.

KICKSTARTER
Race the Sun was successfully funded via Kickstarter on March 7, 2013.

ABOUT FLIPPFLY:
Flippfly consists of two brothers who quit their day jobs to create games independently for PC and mobile devices. Forest (art, design, audio) comes from a graphic design background, and Aaron (programming, design) spent 7 years in the AAA game industry prior to joining Flippfly. He worked on such titles as Marvel:Ultimate Alliance, Singularity, and Call of Duty: Modern Warfare 3. Our hope is to create high-value entertainment that's fairly priced, a blast to play, and that won't employ abusive monetization schemes!

freakyforest  [author] Dec 10, 2013 @ 11:52am
Alright, everything seems to be working now! All existing customers should have a Steam key on their Flippfly Account page. If you haven't setup your account yet we have guides for doing that here: http://flippfly.freshdesk.com/support/solutions/folders/241749

Thanks for being so patient everyone! If you have trouble with anything feel free to make a ticket here: http://flippfly.freshdesk.com/ That will help us keep track of problems and be sure to get back to you.

freakyforest  [author] Dec 10, 2013 @ 7:22am
Hey everyone, a quick update. Aaron was up most of the night dealing with a server error that kept Steam keys from getting to all of our existing players :( He got a bit of sleep and now he's back at it. Sorry for the delay - servers.. it's always the servers..

About the Linux version. We should have the Linux version up very soon, but we had a last-minute bug that blindsided us (related to Steam integration) so we decided to hold it back until we have a fix. Linux is a big priority for us. Thanks for understanding!

freakyforest  [author] Dec 9, 2013 @ 11:12pm
Alright, so the process of getting keys to existing users is underway, but it may take a while. We have some scripts that will be churning through our database and assigning keys - so they may not all arrive at the same time. Hopefully everyone will have their key by tomorrow.

Thanks again for being such patient, cool people!

We unfortunately had to disable the Linux build due to a crashing bug (sorry Linux guys). We are working on that and will get the Linux version up as soon as we work out the bug.

freakyforest  [author] Dec 9, 2013 @ 5:32pm
Hey all, We're not sure exacly how this all works being first-time Steam publishers. We thought 5pm was the time, but it seems not. Hoping to get official word about the release time from Valve. Thanks for understanding - we'll get there eventually :)
< >

Race the Sun has been Greenlit and is now listed in the Steam store. For the latest information, purchase options, and discussions for Race the Sun, please see it on the Steam Store or in the Steam Community.
Visit Store Page
For more details Visit Community Hub
For latest discussions
If you really, really want to, you can continue to the Greenlight page. Information on this page may be out of date, since all the action has moved to the areas noted above.