Starbound>  Workshop > Depression Hurts, Eat More KFC's Workshop
This item has been removed from the community because it violates Steam Community & Content Guidelines. It is only visible to you. If you believe your item has been removed by mistake, please contact Steam Support.
This item is incompatible with Starbound. Please see the instructions page for reasons why this item might not work within Starbound.
Current visibility: Hidden
This item will only be visible to you, admins, and anyone marked as a creator.
Current visibility: Friends-only
This item will only be visible in searches to you, your friends, and admins. 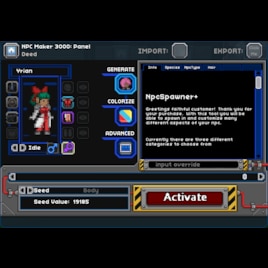 This item has been added to your Subscriptions. Some games will require you to relaunch them before the item will be downloaded.
In 1 collection by Depression Hurts, Eat More KFC
KFC Mods

3 items
Description
Want to be able to spawn in and customize npcs well beyond even what the chargen gives you?
Want to just find that one bloody human npc with the short green hair?
Well brother(or sister!), we at N.P.C. Inc. have got good news for you!

NpcSpawner+
(tldr description: "If the vanilla chargen and Create-A-Friend had a baby, this would be it" - random comment)

1.2.1 Has Been Released! See Below for more details
We go into lots of detail about the inner workings of this valuable asset via in-game tabs, so instead here are some highlights:

-All playable species should be supported, modded or not-
--If it's playable, it's customizable. If it's not playable, with a few in-game keystrokes it can become customizable.

-NpcTypes-
When choosing an NPC, their npctype is incredibly important. We have added most of the vanilla npctypes for your convenience and it has been designed to handle any npctype, modded or not. If the npctype you want isn't found on the list you will be able to add these modded npctypes with a few keystrokes. We guarantee it or your money back! Certain restrictions apply, call our 24-7 customer service for more details.

-Visual-
Want to color an apex's beard a little differently than the rest of his/her body? Want the glow of a novakid's hair to be a tad more blue? No problem. You will be able to safely color each (customizable) part separately. On top of that, body parts can have hue and saturation applied to it. Avians can finally have something other than white faces, and humans can be as blue or as green as you see fit.

-Armor / Weapon modifications-
(Non-Crewmembers only, see below for crew customization)
Want a guard that uses a sword/shield and a capture pod? How about creating a worthy foe with a grenade launcher and a warhammer? All NPCs with combat behavior will use weapons you give them. Want the npc to stick to ranged? Provide it with only a ranged weapon. Want to have a spartan warrior? Give it a spear + 1h pistol and a shield! Want to have a pokemon master? Give it two capturepods.

-Stat modifications-
--There are a few (and growing) amount of stat modification commands you can use to make your npc behave a certain way. These commands are for the more advanced users, and are not required whatsoever to make any of the above work.

-Customize Crewmembers-
Crewmember customizations are ignored by the vanilla companion system. However paired with the clientside mod, Crew Customization +, your crewmembers will keep the armor you provide.

How To Craft:
How To Use:
How To Manage:
Q&A
1. I spawned in an npc and it disappears/explodes either after it warps in, or after I interact with it. Whats going on?
-There is an incompatibility between the species and the npctype. Changing the species to one that the npctype was meant for or switching to a more universal npctype will fix this.

1.2.1 Changes And You! (Not Broken Edition)
New Line of Spawners
Rather than forcing everyone to upgrade at once, the new line of Npc Maker products *the 3100 series* will be available to purchase as separate objects. This will allow you to port over your colonies at your own pace.

New - Npc Maker 3100: Cloaked Edition
The miracles of modern technology has brought all the power of the traditional spawners down to the size of a near-invisible 1x1 dot. This object should be useful for those that like their wall space.

Bug Fixes
*pertains to 3100 series only
Stay tuned for the upcoming addons relating to and crewmembers!

Tahmis May 6 @ 9:12pm
Do you plan to update this mod for the Peacekeeper NPC personality?

Jeanyar2punto0 Apr 30 @ 5:46pm
IS there a way to make The Npc spawned change their dialog?

Depression Hurts, Eat More KFC  [author] Apr 29 @ 4:07am
@C0rvus This mod alone only affects the creation of an npc yes. However it also allows the creation of NPC card items, these items hold the created npc data. This NPC card can be used with another mod I made called The Tenantator (link in the bottom of the mod description). The Tenantator does what you are asking, and will inject the NPC card you created into a tenant deed, even if it doesn't match the aesthetic requirements.

C0rvus Apr 28 @ 8:27am
So this mod is only about the appearance of the npcs? Would it allow me to assign a tenant to a room they usually couldnt be put into (such as Hylotl in a room with almost all apex furniture?) If so, this is exactly what I am looking for.

Starcat5 Apr 17 @ 7:55pm
Still haven't tested "protectoratecourtyardlounger", but the various crew member npctypes are the Ready to Hire variants. This will make getting a specific crew member MUCH EASIER. Deleting original question.

Starcat5 Apr 15 @ 8:33pm
Unrelated, but now I'm wondering if "protectoratecourtyardlounger" will interact with Florin cages or other such objects. It would make jail dioramas more lively if it worked.

Depression Hurts, Eat More KFC  [author] Apr 13 @ 1:14pm
@KwispyBagel Its compatible in the sense that it will function just fine, however it does not have inherent access to FU's species and npcstypes.

Depression Hurts, Eat More KFC  [author] Apr 13 @ 1:11pm
@Emily Underplaid you can type in "detach" in the overrides tab. That will remove the spawner while keeping the npc.
< >