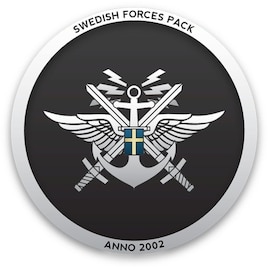 Anrop
Online
See all 2786 collections (some may be hidden)

With soldiers and weapons from the UN operations in Congo in the 1960's to present day and beyond, in woodland, desert, and snow uniforms.

To enjoy all of this over 15 missions for 2-40 players are included, covering both adversarial and cooperative game-modes.

But wait! There is more! If you download now we also include Swedish police uniforms, and some criminals to play with.

Eras
2016-2035, for experimental or limited use equipment, as well as modern UN peacekeepers and vehicles.
2000-2015contemporary equipment and weapons, with Woodland, and special forces variations as well as an assortment of sea, land and air vehicles.
1990-2000, post-cold war with an abundance of iconic equipment from the period such as the Hkp 9.
1980-1990, late cold war era, perfect for your own "Whisky on the rocks"-esque mission.

Vehicles
HMS Norrköping, a missile boat with a fire control radar, enabling you to fire missiles on targets up to 5 kilometers away.
Tgb 16, the BAE RG-32M mine resistant light armoured car in use by the Swedish Armed Forces.
Tgb 11, 20, and 30 families of transport and logistics vehicles, some armed, some unarmed.
Bv 206, a light tracked all terrain troop transport vehicle.
Strv 121, leased Leopard 2A4s adapted for service in the Swedish army.
Strv 122, the modernized Leopard 2 of Swedish flavour.
JAS 39C Gripen, the indigenous multirole fighter developed by SAAB. It is equipped for missions ranging from Combat Air Patrol, to CAS-missions of various kinds. Using pylons to equip weapons such as Rbs 15F, Rb 98 (IRIS-T), Rb 99 (AMRAAM), Rb 75, GBU 39 - the SDB (Small Diameter Bomb), or laser-guided JDAMs, as well as the infamous Bombkapsel 90. Now also equipped with a sensor suite worthy of a world class fighter.
Patgb 203, a three-axle wheeled APC, better known as the Patria Xa-203.
Patgb 360, a quad-axle wheeled APC, marketed as the Patria AMV. It is equipped with an M2 machine gun mounted in a Vapenstation 01 remote weapon station and carries 8 infantrymen in the back.
G-class landing craft, a small boat for transportation of squad-sized elements.
HMS Neptun, a functional 50m long submarine. It is armed with torpedoes.
Ikv 91, a highly mobile light tank armed with a 90mm L/54 rifled low pressure gun.
Strv 103B/C, the famous S-tank, complete with a working driver/gunner gun laying system using the tracks.
Strf 90C, a infantry fighting vehicle capable of carrying 6 infantrymen, armed with a 40mm Bofors autocannon it packs quite a punch. With firing from vehicle support, four soldiers can fight from hatches on the back of the vehicle. The SPAAG variant now has a fully functional radar.
Hkp 4, the Swedish-adopted Boeing Vertol 107, better known as the CH-46 when used by the USMC.
Hkp 9, a light transport and anti-tank helicopter.
Grkpbv 120, the AMOS (Advanced MOrtar System) in a CV90 hull.
Strb 90H, a Swedish Fast Attack Craft capable of transporting (H)alf a platoon of fully equipped marines at speeds up to 40 knots. Armed with three .50-cal Ksp 88's, one in a manned turret, and two in a fixed forward-firing mount.
Tent 12, a tent - yes you read right, a tent - capable of housing 8 soldiers.
Fh 77, a Swedish-made field howitzer.
Svävare 2000, a hovercraft in use by the Swedish Amphibious corps, comes in both troop and vehicle transport variants.
7.5cm m/57 turret gun, a light coastal defense gun. Built in large numbers these were common if well hidden along the Swedish coastline during the Cold War.
Tp 84, the Swedish designation for the C-130 transport aircraft. The Swedish-owned planes are among those airframes with the most hours in the air.
S100B Argus, a Swedish Airborne Early Warning radar aircraft. It is equipped with a very powerful radar and is able to provide a complete picture of the battlefield.

Weapons
Ak4, the iconic H&K G3A3 modified for Swedish use. The versions featured are models A through D, with models B, C, and D equipped with a MIL-STD-1913 rail for optics. Models C and D also feature the Spuhr adjustable G3 stock, and model D is also equipped with the Spuhr G3 forend.
Ak5, the FN FNC with a Swedish twist. Models A through D are featured, together with a number of accessories such as the DBAL-2, Aimpoint CS, and the Aimpoint 3x Magnifier. (CBA A3 is required for switching between 1x and 3x magnification.)
H&K MP5, the iconic German submachinegun, with and without a rail for optics.
Kpist m/45, the "Swedish K", a fully automatic submachinegun used by the Swedish Armed Forces between 1945 and 2007.
Shgr 56, 2000, and 07. A trio of Swedish hand grenades.
Ksp 90B/C, the FN MINIMI light machinegun.
Ksp 58, the FN MAG, with and without rails for optics.
Psg 90, the improved Arctic Warfare model of the Accuracy International L96A1.
SIG P226, one of the pistols currently used by the Swedish Police Authority.
Pistol 88, the Swedish label for the Glock 17.
Remington 870, a 12-gauge shotgun.
CBJ MS, an experimental PDW chambered in 6.5x25mm CBJ, manufactured by SAAB Bofors Dynamics.
GRG m/86, the Carl Gustaf, also known as the M3 MAAWS, "the Goose", "Charlie G" and more. It fires a number of different types of 84mm ammunition, and can be put to use against armour as well as infantry and low-flying aircraft. Comes with native buddy reload, and supports ACE's buddy reload system as well.
Ag 90, the Barrett M82A1 12.7x99mm NATO semi-automatic sniper rifle.
RBS 17, the Hellfire Shore Defense System (HSDS), in use in the Swedish Amphibious Corps.
GRK m/84, a 81mm medium mortar. With full support for the ACE3 Mk6 mortar loading and firing system.
RBS 56 BILL, a man-portable SACLOS anti-tank system.
RBS 70, a Swedish MANPADS system.
RBS 97, the MIM-23 HAWK in Swedish service.
And much more.

Compability
ACE3
We do our best to be 100% compatible with ACE, and to implement new features. Let us know if we aren't.

TFAR
Radio system for both infantry and vehicles. When using TFAR, the Swedish soldiers will use a Ericsson Radio 180.
Popular Discussions View All (9)

Megadeth  [author] May 8 @ 12:10pm
I made one years ago but we removed itbecause it was not up to snuff

FreeBird0964 May 2 @ 8:37am
will you guys ever release the centurion as a standalone?

TFatseas Apr 19 @ 8:23pm
Just a heads up. Getting a config error on startup about 82mm mortar viewangle or somefink.

I've used this mod for a long time. Nice to see you guys still around, and just wanted to say I appreciate your work very much!

Is there a possability to add this mod to our Community modpack?
We run a small Dutch/Belgium community and would love to add this mod.
Also all credits will be provided in our mod description

Megadeth  [author] Apr 8 @ 11:59am
Ljungen81: We got tons of stuff ready modelwise that would easily compare to GM. But as AugCph said we are doing this on our spare time and we are all getting older. But for A4 we will be really ready.
< >