Store Page
Hearts of Iron IV >  Workshop > Greatexperiment's Workshop
This item has been removed from the community because it violates Steam Community & Content Guidelines. It is only visible to you. If you believe your item has been removed by mistake, please contact Steam Support.
This item is incompatible with Hearts of Iron IV. Please see the instructions page for reasons why this item might not work within Hearts of Iron IV.
Current visibility: Hidden
This item will only be visible to you, admins, and anyone marked as a creator.
Current visibility: Friends-only
This item will only be visible in searches to you, your friends, and admins. 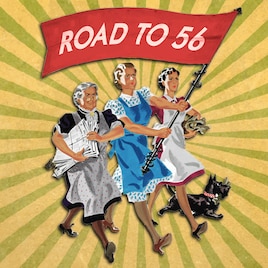 Thinking_waffle
Offline
See all 15966 collections (some may be hidden)

Road to 56 is a DLC-sized addition to your Hearts of Iron experience that has been lovingly crafted by a team of dedicated fanatics.

We've massively expanded the technology tree, extended the timeline to 1956, and developed some truly awesome alternate-history paths for nearly every country.

How about an expansion to the totally awesome Cold War game Terminal Conflict?

Thank you so much! Have a wonderful day!