Store Page
Space Engineers >  Workshop > Digi's Workshop
This item has been removed from the community because it violates Steam Community & Content Guidelines. It is only visible to you. If you believe your item has been removed by mistake, please contact Steam Support.
This item is incompatible with Space Engineers. Please see the instructions page for reasons why this item might not work within Space Engineers.
Current visibility: Hidden
This item will only be visible to you, admins, and anyone marked as a creator.
Current visibility: Friends-only
This item will only be visible in searches to you, your friends, and admins. 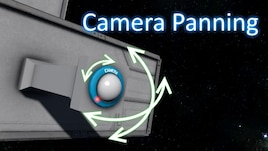 39 items
Description
This mod enables players to change the direction camera while viewing it.
Works for any camera block, modded or vanilla.

How to use in game
When you view a camera the mod will tell you the controls as a HUD notification.

You can also swap the yaw control with the roll control by holding the Sprint key (default: Shift), very useful for ceiling mounted cameras as shown in the video.

To reset the view back to centered press the Change Camera View key (default: V).


Pitch and yaw angle limits are determined by the camera's raycast angle limit (which is default to 45 which means -45 to 45). Roll has no limit.

The view speed limit is also intentional to give a servo motor feel.

Different people on the same camera can look in their individual directions because the view is not synchronized.

Other effects
This mod also changes:
- The max FOV on the vanilla cameras to 100 degrees (because 60 was simply too low), this does not affect mod-added camera blocks. However it is fully compatible with mods that change things on the vanilla cameras (except of course the max FOV).
- Fixes the position of the camera being in the center of the block rather than close to the camera model itself. This affects all non-modded cameras that do not have a ModelOffset set to them (because that also moves the camera view).
- Camera key resets first person view orientation on characters if 3rd person is disabled.

Side notes
I've not used the vanilla roll controls (default Q/E) for rolling the view for 2 reasons:
- Alt+Q/E still operates gyroscopes and I can't stop that.
- It can get more confusing than it is now.

Known issues
- (PB scripts) When the host rotates a camera, the camera raycast will be rotated along with it until they leave the camera view; this does not affect DS since DS can't view cameras.

XBox ?
Will not work. This mod relies on client-side scripts which are not allowed on the console itself.
Popular Discussions View All (3)

Thank you for the answer!

Digi  [author] Jul 29, 2022 @ 8:42pm
I'm gonna need logs or error messages if you need me to look these things, the game itself is full of issues, especially right now with *any* mod causing the "Value cannot be null, parameter: path1" because it's from the game itself.

@Mitokandria (Tricks)
You mean non-torch? It doesn't matter, I would've mentioned it in description if it did :P
Or by vanilla you mean the server itself doesn't have the mod, then not without using a client plugin like plugin loader which does allow some client-only mods to be installed ( https://steamcommunity.com/workshop/filedetails/?id=2407984968 )

Bosmaire May 22, 2022 @ 6:32pm
i cant ffathom what is causing it, but this mod causes my world to unload and im unable to get into my friends server(even though it worked fine before, i dont know what could have changed) any ideas?

Echthros Apr 8, 2022 @ 11:18pm
Well, if you're interested. What seems to happen if more than one MyGameLogicComponent gets added to the same entity by mods is that the entity's GameLogic property becomes a MyCompositeGameLogicComponent, which is a wrapper class that holds all of the different components inside. What I ended up doing was looking inside that class for the list of attached components (which in this case included both my component and Digi's) and set the NeedsUpdate value of every component that wasn't mine to MyEntityUpdateEnum.NONE. This effectively turns off Digi's component (by disabling the main update) for only my cameras if both mods are present. It's definitely a hack, but it works. Look at SpyCamerasProxy.cs:105 in the "Recon Cameras" mod for the exact code.
< >