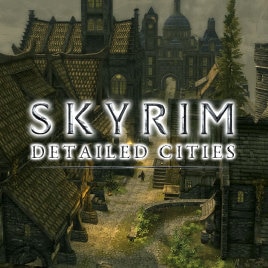 Dex
Offline
See all 4069 collections (some may be hidden)

This item has been added to your Subscriptions. Some games will require you to relaunch them before the item will be downloaded.
Description
Detailed Cities is a graphical enhancement modification for The Elder Scrolls V: Skyrim. Detailed Cities adds more than 1000 extra assets or modifications to the cities of Skyrim, giving each city a more vibrant feel. Detailed Cities primarily uses assets already in the scene to have as little effect on load times and performance as possible while still providing a substantial increase to believability.

Please note: Though Detailed Cities was not originally made with Dawnguard in mind, this should have no effect on the compatibility with the mod to the game, most compatibility / errors are due to other mods not being compatible with Detailed Cities or vice versa. To troubleshoot this try changing the order in which the mods load.

Riften:
- Added new lighting to Riften, but not so much to take away the sneak shifty look.
- Added artificial light source to true lighting that is there for quests lines I suppose.

Fixes:
- Cutting block at the Skyforge
- Some objects not seated correctly.
- Artificial or true light sources with one without the other.

- Make compatible with Open Cities. (Trees already show up in Whiterun)
- Adding city lights to unnaturally dark areas of the cities (If you have a lighting mod it might have already fixed this).

- If you have any bugs to submit, please give a detailed description of the problem and a screenshot.
< >
613 Comments

CoollaireOfDankstora May 9, 2019 @ 8:53pm
I'll never understand the fetish that is adding fooliage and calling it "enhanced". Personally i like having 60fps and smooth gameplay.