Store Page
Stellaris >  Workshop > Princess Stabbity's Workshop
This item has been removed from the community because it violates Steam Community & Content Guidelines. It is only visible to you. If you believe your item has been removed by mistake, please contact Steam Support.
This item is incompatible with Stellaris. Please see the instructions page for reasons why this item might not work within Stellaris.
Current visibility: Hidden
This item will only be visible to you, admins, and anyone marked as a creator.
Current visibility: Friends-only
This item will only be visible in searches to you, your friends, and admins. This item has been added to your Subscriptions. Some games will require you to relaunch them before the item will be downloaded.
In 1 collection by Princess Stabbity
Team Nessassity - Stellaris

MEC: Asari is a Stellaris mod that adds the Asari species from Bioware's Mass Effect franchise into the game! They come with a custom shipset, several portraits (and a lot of clothes), pregenerated empires, origins, civics, traits, events and more! Pregenerated Empires:
Civics:
Traits
A huge assortment of customisation options! You should never see two identical pops on a planet or two identical leaders in your empire!
Custom ships and city graphics!

Be sure to check out other mods by Team Nessassity!

Especially our other Mass Effect mods!

If you like what you see, consider supporting us directly! 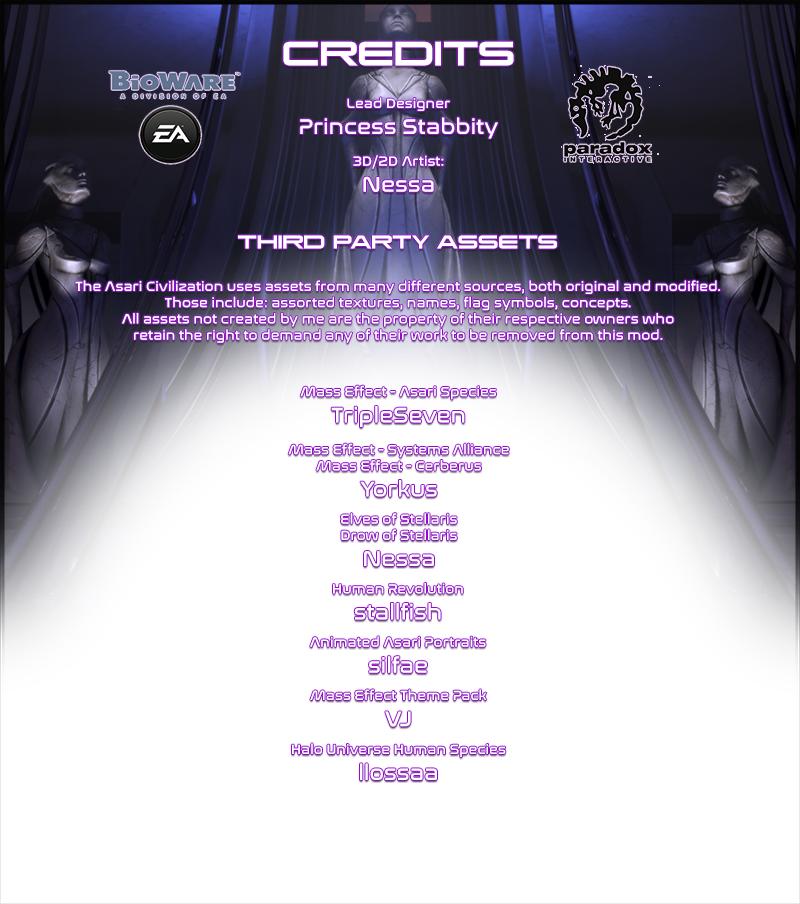 Princess Stabbity  [author] Sep 25 @ 7:42am
@Cobalt Wolf @Imarius
It's a very simple fix, you just need to rename one thing.

Go to the mod's gfx/portraits/portraits folder, find whichever text file defines portrait selectors, and then, everywhere you see the word "hair_selector", replace it with "attachment_selector"

Imarius Sep 25 @ 7:29am
I second, what Cobalt Wolf said. Since none other than this mod works in 3.5 without turning bald, I was looking to do a "hotfix" myself but do not know where to look. Documetation online for this specific problem ist pretty much nonexistent.

Cobalt Wolf Sep 25 @ 12:43am
Would you be able to share how you fixed the hair glitch? SE - Mass Effect Asari still has the hair glitch as the author has not updated the mod since Toxoids came out. I was hoping to do it myself for that mod.

Princess Stabbity  [author] Sep 24 @ 12:28pm
UPDATE!
Clearing the Illium special blockers should work correctly now, and all asari deposits and AI budgeting related to them should work as intended again.

Unfortunately, deposits that have already been cleared cannot be retroactively fixed, so a new game is strongly recommended for anyone using the Illium origin. I'm so sorry for this oversight! ._.

Princess Stabbity  [author] Sep 22 @ 9:22pm
@Nottrson: Is the mod-added species in question updated for compatibility with 3.5? If not, then it's probably the vanilla issue related to selectors being renamed.

But whatever the case, it's not possible for a mod to affect another mod in such a way unless the mod being affected is explicitly linking to this mod's assets. And if that's the case, there's nothing we can do on our end.

Nottrson Sep 22 @ 2:05pm
So, I'm not sure if this mod is to blame, but it seems like the most likely suspect. Basically, one of my mod-added species is shown as having asari hair, despite not having it in the civ creation/editing screen.

Princess Stabbity  [author] Sep 20 @ 11:31am
Okay! A super tiny emergency hotfix is out that should stop excessive error log whining and "hair" glitching. A more substantial update is planned Soon™, but if you come across any major bugs in the meantime, please report them and we'll try to address them ASAP.
< >