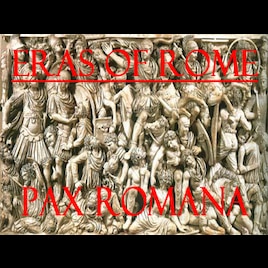 Andrew Boyarsky
Online
See all 18 collections (some may be hidden)

The Eras of Rome team is back with our next mod called Pax Romana. This is based off of my original PR mod but this mod is to be far more than my original vision. The mod moves the Roman Empire into its time of crisis. The year is 260 A.D. and the Empire is split, divided by the Gallic Empire of Postumus in the west, the Macrian rebellion under Macrianus and his sons and the semi-autonomous city of Palmyra led by Odaenathus in the East. The frontiers are beset by German, Steppe, and Persian enemies. Rome, having been humiliated in the East by the capture of Valerian by the Persians, must have her vengeance. However, Gallienus is left in a precarious position. You must reverse the fortunes of the waning Empire and return her to her former glory! Roma Victrix!

MOD FEATURES:
-4 turns per year
-Unit sizes increased, Roman units have increased upkeep to represent to help simulate the inflation of the later Empire
-Complete sets of new equipment (helmets, shields, etc.) modeled after 3rd century equipment, as well as relevant models from other fantastic mods
-Many new units for all factions (except Picts at the moment), most based on solid historical knowledge, some based on best interpretation of what is known
-Roman tech tree reworked in order to better represent the changing Empire, as well as some new tech for Germans and Eastern factions
-New buildings for the Roman factions (including a historical one), some for the Eastern factions as well.
-Proper historical figures added (Gallienus, Postumus, Diocletian, etc.)
-Population mechanic added as well as the People's Trust mod, both relevant issues in the late Empire (i.e. manpower, and loyalty/betrayal factor that plagued later emperors)
-New music from epic movies to hopefully immerse the player more fully, including Gladiator and the Eagle
-New menu and loading screen backgrounds, as well as new quotes during loading.
-Roman garrison system changed, now requiring the player to build garrison forts in order to defend towns without standing armies; normal military buildings no longer provide them; this will simulate the Empire's struggle to defend its frontier
-Roman army will be able to upgrade from the pre-Diocletian army (legions, auxilia, etc.) to the post-Diocletian army (comitatenses, ripenses, etc.) via tech.
-changed starting legions to proper ones (II Parthica, V Macedonica, I Minervia, etc) as well as their date of formation (197 AD, 43 BC, and 82 AD respectively).

I've done my best to recreate the 3rd century accurately. I've had to use a combination of new equipment from various sources so the quality is mismatched at times, along with some vanilla. If anyone sees any glaring inaccuracies with units, please do let me know. I want to create the most historically accurate mod as possible.

Not compatible with any mods that mod startpos or script.

Credits:
Dresden and Ahiga for many models from CRoC as well as their advice and help
Magnar for his population mod, as well as his advice and help
Prime for his People's Trust mod
Heinrich von Preuben for his building ideas and creation
Andrew for his tireless efforts to create the new units
Thunderbolt and The_Germans for new shield patterns
Asterion, Hloeric, and dontfearme22 for helmets
Noif for his faction banners
Alaric for armor
Regnator for his transport mod

Gaius Julius Caesar  [author] Apr 13, 2019 @ 5:37pm
No its not updated for the current patch. I'm creating a new mod that modified Empire Divided. that will supersede this one.

Gaius Julius Caesar  [author] Mar 23, 2019 @ 8:47pm
There will be a new mod available soon with a new name and based on the Empire Divided campaign