Store Page
Arma 3 >  Workshop > Keeway's Workshop
This item has been removed from the community because it violates Steam Community & Content Guidelines. It is only visible to you. If you believe your item has been removed by mistake, please contact Steam Support.
This item is incompatible with Arma 3. Please see the instructions page for reasons why this item might not work within Arma 3.
Current visibility: Hidden
This item will only be visible to you, admins, and anyone marked as a creator.
Current visibility: Friends-only
This item will only be visible in searches to you, your friends, and admins. 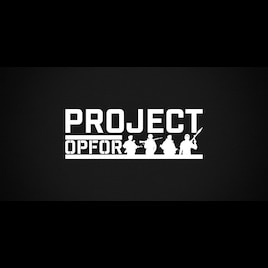 This item has been added to your Subscriptions. Some games will require you to relaunch them before the item will be downloaded.
In 1 collection by Keeway
Game Corner Team - Kolekcja Modern

30 items
Description
The Project OPFOR brings you new factions and armies, which were/are involved in recent military events in past few yearrs. For now to use this mod you only need three mods made by Red Hammer Studio - Armed Forces of Russian Federation, United States Armed Forces and GREF . 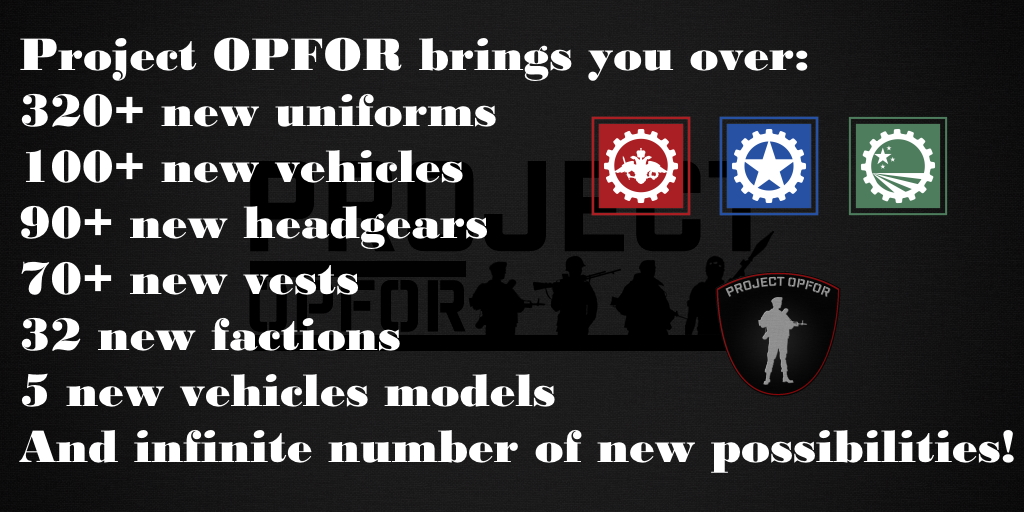 Never heard about our mod? Mind reading this summary. It adds over 30 new factions to the Arma 3 from all around the world. A vast range of forces such as Middle Eastern Militia, Novorussian Armed Forces, Ukrainian Armed Forces, Islamic State, Irish Republican Army and many more will totally revamp your Arma 3 experience. You dont need to bother about quality of weapons used by our units - in this case we are totally dependent on RHS. In summ our mod adds nearly 500 new uniforms, headgears and vests to keep our factions as realistic as possible.

Credits:
- Red Hammer Studio for their awesome mods
- Reyhard for a lot of help, T-72 CDF textures and permission to include his T-34 and T-55
- zGuba for introducing me to the arma configs and answering many of my questions
- Stagler for his chechen units textures from Arma 2
- LFT? for textures for turkish faction
- trenchgun for his "DADPAT" Private Military Company retextures
- Nadezhda_grapes for his "Plaid" and "Floral Plaid" patterns
- rawpixel.com for his "Floral" and "Palm" patterns
- >D4S< Shepherd of Fire for extending some editor groups
- Ma77h3hac83r for new logo and banner
- Mikero for his awesome tools
- Basher for helping with stringables
- brainslush for helping me fixing a lot of stuff
- (SWE) Jonathan for making ChDKZ and SLA screenshots
- Aplion for letting me use his physX configuration for landrover (not in use btw)
- Krukov and his IEU for bughunting and feedback in the past
- Grim Panda and his Force Protection Combat Team for testing in the past
- Sharpmaster1379 for being our military advisor in the past
- Whole community for help, feedback and ideas
- Bohemia for best game in the universe

If you enjoy this addon, please rate.
Popular Discussions View All (3)

Permission To Use Vest Texture
[TLS] Commander A9
< >
769 Comments

Flash Jun 16 @ 3:58am
i know this mod is old and abandoned but it still works? i would like to play with islamic factions and this one is the only i find

Trollge Momo May 11 @ 8:21pm
May I use the Tubitak textures in the future for one of my mods?

KızılSakal Mar 31 @ 3:58am
Dead mod, because some problems include a conflict.

KSK GermanEagle Mar 6 @ 6:24am
I can't use the troops while in Zeus? is that normal?

ɴᴏᴍᴀᴅ Feb 19 @ 8:05am
I have been familiar with this mod for a long time, and I create conflicts involving Ukraine, and looking at the Mi-24 camouflage, I have a twofold feeling in the game, can you change it to a more real one
< >