Store Page
RimWorld>  Workshop > edbmods's Workshop
This item has been removed from the community because it violates Steam Community & Content Guidelines. It is only visible to you. If you believe your item has been removed by mistake, please contact Steam Support.
This item is incompatible with RimWorld. Please see the instructions page for reasons why this item might not work within RimWorld.
Current visibility: Hidden
This item will only be visible to you, admins, and anyone marked as a creator.
Current visibility: Friends-only
This item will only be visible in searches to you, your friends, and admins. 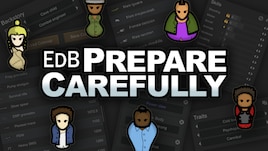 edbmods
Offline
See all 77165 collections (some may be hidden)

This item has been added to your Subscriptions. Some games will require you to relaunch them before the item will be downloaded.
Description
Customize your RimWorld colonists, choose your gear and prepare carefully for your crash landing! Use the optional point limits to try to create a balanced start or keep points disabled to build the starting group that you always wanted to try. Save your setup as a preset so that you can start your game the same way later.

Please see the original forum thread[ludeon.com] for more information. It may be a better place to look for help if you're running into trouble.

The 1.3.11 release fixes an issue with relationships when loading presets.

The 1.3.10 release fixed a compatibility issue with the Psychology mod after it broke with the previous release.

Please continue to report any issues or mod incompatibilities that you see. We can't fix all mod compatibility issues, but we always try to make it work with as many other mods as possible.

This release of the mod no longer supports version 1.0 of the game. If you need to manually install an earlier version of the mod, you can find all of the releases on github[github.com].

Why doesn't the "Prepare Carefully" button appear for me?
First and foremost, make sure that you've enabled the mod. This will be obvious to experienced mod users, but if you're new to RimWorld mods, you need to go into the Mods menu when you start the game and explicitly enable a mod after you've subscribed to it.

If you've got dozens of other mods installed, it can be difficult to know what's causing this. Sometimes, an error while loading another mod that is before Prepare Carefully in the mod order causes Prepare Carefully not to load properly. In other cases, I have heard that some people have success with uninstalling and then reinstalling the game, but it's difficult for me to recommend that approach. Posting the game's log file somewhere (if you know how to do that) can help, but only do so if this if you've pared down the number of mods you're using to a minimum.

When I click the Prepare Carefully button, it doesn't do anything or I get an error message. Why doesn't it work?
This usually happens because another mod is doing something that Prepare Carefully does not expect, and it causes an error. It's impossible to test with every mod out there, so issues like this are inevitable. However, we do try to continue to improve the error handling in the mod to try to avoid them.

I'm using point limits. Why does {insert thing here} cost the number of points that it does? It should cost more/less.
The point system relies on the vanilla game's built-in "market values." These market values are balanced for vanilla gameplay and not for setting up a starting group of colonists. I've made some tweaks to try to balance this, but it really is an impossible task, and you will see things that seem wrong. For example, the vanilla values for colonists do not take passions or traits into account (for the most part). I've added costs for passions, but I've left traits alone.
Popular Discussions View All (147)

Issue: World colonists not appearing under 'relationships' as they normally should.
Magic Mark
< >
4,330 Comments

SacredDread 1 hour ago
I got nothing, I don't know if its the mod or just the game. Because I messed around with Character Editor and it also has a bunch of missing items. And I've spent several days messing around with mods. So I have no idea what is going on.

SacredDread 19 hours ago
@Sheppard Personally, I've narrowed it down to the Vanilla Expanded Framework, with the Androids mod, and something else are interacting and causing a bunch of stuff in Prepare Carefully to not show up, as well as not show up in game. Certain hairs that don't appear in prepare carefully aren't showing up on pawns in game, they just have a bald head. The styling station shows the name and image of the hair, but in game it doesn't show on the pawn.

I could just get rid of the vanilla expanded stuff and that fixes everything. But getting rid of that is like cutting off my own arms at this point. But Androids I can live without and probably whatever is causing issues alongside it.

SacredDread May 21 @ 7:56pm
@Sheppard Have you tried messing with your mods? I have the same problem and I couldn't fix it after taking out dozens upon dozens of mods. It most likely is a mod instead of a bug with Prepare Carefully, but I have so many mods that I can't figure out which one it is.

AussieBattleCat May 18 @ 12:15am
Does anyone have the problem where you change their name in the Bio, it doesnt change the name of the character of the left?

Torgranael May 16 @ 5:50am
I agree with @matt4corps. Also, add any search functions that aren't there yet (I haven't played Rimworld in a while so I apologise if that's already been added). Searching for a specific trait or background can get tedious, even with filters.

matt4corps May 15 @ 6:22pm
Please, for the love of god. When adding traits, make it so you can select multiple at once. Christ, it's so damn tedious going through them one at a time with mods that add extra-traits.

Sheppard May 15 @ 3:13am
Some Archotech and Appereal are not found in Prepare Carefully
< >