Store Page
RimWorld>  Workshop > JustinNeedsCaffeine's Workshop
This item has been removed from the community because it violates Steam Community & Content Guidelines. It is only visible to you. If you believe your item has been removed by mistake, please contact Steam Support.
This item is incompatible with RimWorld. Please see the instructions page for reasons why this item might not work within RimWorld.
Current visibility: Hidden
This item will only be visible to you, admins, and anyone marked as a creator.
Current visibility: Friends-only
This item will only be visible in searches to you, your friends, and admins. 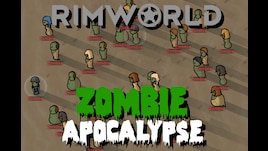 JustinNeedsCaffeine
Offline
See all 199 collections (some may be hidden)

This item has been added to your Subscriptions. Some games will require you to relaunch them before the item will be downloaded.
Description
Description
This mod adds Zombies to the game. Zombies are a completely unique and challenging enemy which can greatly increase the difficulty of RimWorld.

Compatibility Notes
Zombie Apocalypse is not compatible with EPOE without the EPOE compatibility patch. If you try to run them together without the patch they will not play nicely together.

- This mod might have compatibility issues with other mods that alter Pawns.
- This mod will not be compatible with previous saves.

Features
Zombies
- Zombies are mindless killers. They kill you and your enemies indiscriminately.
- Their bites are infectious. If a colonist is bitten you will get an alert. The colonist will slowly die of the bite, and then they will turn into a zombie immediately on death.
- They are 20% slower than colonists and other enemies, and can be easily killed with Cutting weapons like knives and swords.
- You can easily keep track of the origin of any zombie by looking at their names. A zombie that was spawned in a zombie horde will simply be named "Zombie". If the zombie reanimated from someone who was originally living in your game, their name will be "Zombie [Name]". If they were a colonist there will be a pair of "*"'s surrounding their name.

Zombie Infection
- The Zombie Infection will affect any limb that is bitten by a zombie. This can be seen in the Health tab.
- Removing infected limbs will cure a colonist of the infection.

Zombie Hordes (raids)
- Zombies attack in large numbers.
- Zombie hordes always attack immediately.
- Zombie stragglers will be left behind, forcing you to leave your base to deal with them after the initial zombie attack is over.
- Zombies do not give up or flee.

Zombie Apocalypse/Airborne Zombie Virus
- The zombie virus goes airborne and affects all humans and corpses. All human corpses will start reanimating even if they were never bitten while living.
- This incident never ends. Once the virus goes airborne, everyone is infected.

NOTE: The airborne virus does not harm your living colonists. It just means there will be more zombies for you to deal with, since casualties from normal raids can later be reanimated if not disposed of.

Special Thanks
Special thanks to Vuursteen, Skyarkhangel, Latta for updating the mod for A12, and to the Hardcore SK team for updating it for A13.

My Other Mod
If you enjoy Zombie Apocalypse consider taking a look at my other mod, Wave Survival Mode:
http://steamcommunity.com/sharedfiles/filedetails/?id=732261506

Wave Survival Mode is a unique combat-focused game mode where you have to survive as long as you can against wave after wave of enemies with little time in between to recover. It's a unique experience that feels and plays completely different from vanilla RimWorld.

Wave Survival Mode is not fully compatible with Zombie Apocalypse, but that will change soon.


NOTICE: An earlier version of this mod was uploaded to the Steam Workshop without permission and has been removed. This is the original RimWorld Zombie Apocalypse, and I am the original author of this mod.
Popular Discussions View All (10)

For Those Too Lazy to Check Comments -
Cobraroast
< >
703 Comments

HEROnymous_B0T Apr 18 @ 9:42pm
COME BAK 2 MEH MAKE THIS MOD GREAT AGAIN. Seriously the other mods are shit compared to this one.

Albert Speer Mar 20 @ 4:18am
i guess the immortality mod conflicts with this?