Store Page
Starbound >  Workshop > Neo's Workshop
This item has been removed from the community because it violates Steam Community & Content Guidelines. It is only visible to you. If you believe your item has been removed by mistake, please contact Steam Support.
This item is incompatible with Starbound. Please see the instructions page for reasons why this item might not work within Starbound.
Current visibility: Hidden
This item will only be visible to you, admins, and anyone marked as a creator.
Current visibility: Friends-only
This item will only be visible in searches to you, your friends, and admins. 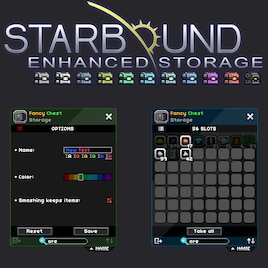 This item has been added to your Subscriptions. Some games will require you to relaunch them before the item will be downloaded.
In 1 collection by Neo
Storage, interface and farming improvements

10 items
Description
Enhanced Storage is a quality of life mod which improves the whole storage system of Starbound. On the one hand it adds a lot of new features to the usablity of containers, and on the other it adds many new content concerning storage and containers.

A lot of mods are supported:

This mod can be expanded with addon mods

BIG thanks for your great support:
Do you miss your name on the list? I'm so sry, please let me know!

This mod is not compatible to Improved Containers, or other mods which change vanilla containers!
Popular Discussions View All (60)

MrGasmask Nov 11 @ 3:11am
it doesnt work, my items vanish after smashing the crate and placing it back

ExplorerRowan Oct 26 @ 5:01am
I don't suppose anyone knows of a compatibility patch to make Indix and Lastree racial containers work with Enhanced Storage?

Ninja Danny Oct 25 @ 6:14pm
using larger size than the chest originally was causes lag spikes when taking items our and placing them into storage. its pretty bad.

[FR] HELLION Oct 24 @ 4:03am
Hey, does the food item keep rooting inside a container which is full and inside player inventory ?

GrimReaper339 Oct 8 @ 3:58am
Sorry for the late reply. Basically, hitting the button to download the mod does nothing. Nothing shows up, nothing gets downloaded, and you don't get taken to a 3rd party download site.

Jet Oct 7 @ 4:26pm
Is there any chance this mod could be what's causing all shops (stuff like Terramart and NPC shops) to lag for me? I expected a little bit of lag from Outpost shops because I have a lot of mods that add to them, but it's really bizarre that NPC shops lag too.

Neo  [author] Oct 6 @ 3:53pm
Thanks!
On my side I'm able to download the file normally.
What happens on your side exactly?

GrimReaper339 Oct 2 @ 4:47am
Hey, the file download link on the Chucklefish forums is broken, and you can't download the file. It's been almost a year since that happened. Dunno if you're just ignoring the file on the forums, but it needs to be fixed. Just thought I'd let you know.

corgim Sep 10 @ 12:22pm
if you don't know the item id or never looked at the comments: here is the id for storage matter: