Store Page
RUNNING WITH RIFLES>  Workshop > The Soldier's Workshop
This item has been removed from the community because it violates Steam Community & Content Guidelines. It is only visible to you. If you believe your item has been removed by mistake, please contact Steam Support.
This item is incompatible with RUNNING WITH RIFLES. Please see the instructions page for reasons why this item might not work within RUNNING WITH RIFLES.
Current visibility: Hidden
This item will only be visible to you, admins, and anyone marked as a creator.
Current visibility: Friends-only
This item will only be visible in searches to you, your friends, and admins. 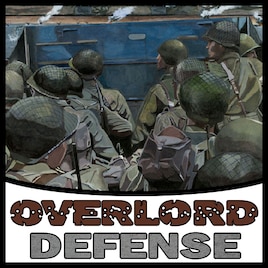 The Soldier
Offline
See all 55 collections (some may be hidden)

This item has been added to your Subscriptions. Some games will require you to relaunch them before the item will be downloaded.
Description
The Overlord Defense mod is a package that adds in a purely defense-based map. Includes two factions designed for the map, the US Army and the Wehrmacht, and vehicles for both.

It's the middle of the year of 1944. You, as a soldier on the Atlantic Wall, don't expect much to happen - the Allies have only just started their advance into Italy. But suddenly, one morning, you spot a massive fleet off the coast. Despite the naysayers, you ready up for the assault.

Can you face off the waves of attackers? The seemingly endless amounts of men and machine? Can you change history, or will you make it?

The Wehrmacht, beaten back on the Eastern Front and forced out of North Africa, has adopted a much more defensive doctrine. Many of their weapons are heavy and slow to carry around, but have quick reloads and large magazines capable of suppressing even the largest assault.
Arsenal: MP-40 StG-44 Gewher 43 Kar98k MG-42 Kar98k ZF42 Gewehrgranatgerat Panzerschreck 54 Flammenwerfer 35 Model 24 Grenade HMG42 Deploy Flak 36 Deploy Panzerfaust 60 Walther P-38
< >
126 Comments

Satan May 15 @ 4:45pm
I hate this mod, it's terrible in terms of balance. I get that you're kinda supposed to lose but once the tanks get involved it's just a slaughter. It'd be better if you lost a bit, you know, slower.
But because this mod caused me so much pain, I decided I'd beat it no matter what.

SO I FUCKING DID FUCK YOU I WIN YOU LOSE BYE BYE
https://steamcommunity.com/sharedfiles/filedetails/?id=2097817953

(you pretty much have to do /RP and spawn a shit ton of soldiers at the beach, it forces the US to go into choke points swarming with Germans)

项_Pro May 6 @ 3:03am
The US so strong， Germany can not stop them.no panzer no anti-tank no armoured vehicles. In others, RP hard to get，I hardly to buy special weapon

Stefan Apr 19 @ 12:38am
This is supposed to be impossible so you are right @ToXxy

ToXxy Apr 18 @ 2:25pm
You know the map is bullshit when you get overrun even after spending tens of thousands of RP to build stationary weapons everywhere and spam reinforcements.

The US gets way too many units, way too many of them are elites. They get way too many vehicles and the tanks are way too resilient. Germany gets fuck all troops, the trenches are too deep to fire from, most stationary weapons either get quickly blown up by grenade/rifle grenade/bazooka spam or tanks, or their users are killed. No tanks either, and the AI never calls down armored cars.

Stationary stacking makes no sense (PAKs up to 2 but everything else (including cover?!) only stacks up to 1. Getting more RP is difficult because you have to recover loot from the open field through the unending assault. Even if you save up tons of RP (as I did), then fail and start building as soon as the map restarts with the carried over RP, you only have a minute or two to build, barely enough for anything.

Kalevia_Leijona Jul 27, 2019 @ 9:37pm
A generally awesome mod. I know difficulty is reality on D-DAY, BUT it's bullshit that ONE Sherman needs FOUR Panzerfaust to destroy. Why not modify it to 2 shots for tank and 1 for armoured car? Meanwhile u may introduce additional USAAF bombing and artillery fire.