Store Page
Age of Wonders III>  Workshop > Zaskow's Workshop
This item has been removed from the community because it violates Steam Community & Content Guidelines. It is only visible to you. If you believe your item has been removed by mistake, please contact Steam Support.
This item is incompatible with Age of Wonders III. Please see the instructions page for reasons why this item might not work within Age of Wonders III.
Current visibility: Hidden
This item will only be visible to you, admins, and anyone marked as a creator.
Current visibility: Friends-only
This item will only be visible in searches to you, your friends, and admins. 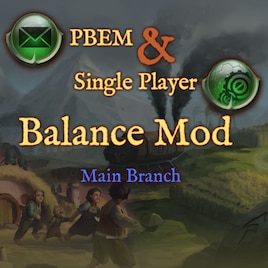 hiliadan
Offline
See all 177 collections (some may be hidden)
You need DLC to use this item.

This item has been added to your Subscriptions. Some games will require you to relaunch them before the item will be downloaded.
Description
1.31 version was released!

What is the PBEM & Single player balance mod?
The PBEM & Single player balance mod aims to balance the game for PBEM and single play, that is to say to make it possible for any combination of class/race/specialisations chosen to win a match if good strategic and tactical choices are made during the match. In PBEM games, it is a must-have to avoid one-sided games, and in single play, it significantly increases the fun of games through both balancing and the addition of synergistic abilities for some units (like Engineers and Halfling Brew Brothers). The mod is mainly coded and coordinated by Zaskow and Hiliadan (and in the past cbower).
The mod has been developed with the AoW3’s community and changes are integrated only after a consensus is reached regarding their need. It is thus a real community mod and not a mod based on the opinion of its developers. Changes that do not achieve their initial aims are edited or removed and the mod has already been through many iterations over more than a year.

Why PBEM players and single players should use the balance mod?
Triumph stated that they are happy with the current balance of the game. Its latest official patch, v1.8, brings only a handful of balance changes and mainly focuses on bug fixing. It is thus now the job of the community and of this mod to balance the game!

The game suffers from several big imbalances that the mod corrects:

https://www.youtube.com/embed/videoseries?list=PLVegwVpl7gLENQGy5fjGryvor43W_GA3j
Illustration of why Necro is OP – Round 5 of the 2015 PBEM Duel Tournament – Necromancer Draconian mirror match

– XP farming is encouraged in the official version because touch abilities (Touch of Faith, etc.) provide XP whenever they are used and the limits of XP each unit can yield when it is hit is too high, meaning that players have huge incentives to stall fights to use all their touch abilities and to limit damages caused to enemy units to harvest as much XP as possible from these units (see also the videos above)

– And many more smaller issues

The balance mod pays attention not to bring changes that can reduce the fun for single players. Using the mod thus brings you the benefits of a more fulfilling game without any drawbacks. The mod also brings many new interesting synergies and uses to weak units (Dreadnought's Engineers can now build Roads and have an improved Flash Bomb; Halfling Brew Brothers provide Bolster when they use Fortifying Meal and synergize with Halfling Farmers by allowing them to re-use Throw Chicken) and weak specializations (all elemental spec have been boosted, e.g. Domain of the Sun now gives +1 fire damage). Cf. the screenshots.

--- To go further ---
Bug reporting: on Paradox official forums: https://forum.paradoxplaza.com/forum/index.php?threads/pbem-sp-balance-mod-development-thread.1119915/ or by commenting here on the Workshop
Balance discussion: https://forum.paradoxplaza.com/forum/index.php?threads/balance-based-on-hard-data-from-the-pbem-tournament-continued.1121531/
News on the latest versions of the balance mod on the AoW3 community website, the Battlefield, in the news section: http://www.the-battlefield.com/aow3/index.php?page=gamenews
Summary of all the proposed changes and opinions of the community: https://docs.google.com/document/d/1flsHncpzAmJa_2xMHZ6Tlp-mf69ej2mYrSGNc4V3_QA/edit?usp=sharing

--- Beta Branch ---
This mod is the "Main Branch" of the balance mod, i.e. the stable version we recommend for most users. A Beta Branch is used to test the latest changes before bringing them to the Main Branch, and is updated more often: http://steamcommunity.com/sharedfiles/filedetails/?id=758212846

Compatibility with other mods
hiliadan
< >
211 Comments

elijafire Mar 15 @ 10:56am
When the necromancer started leeching my kills in an Emp game I just spam killed tons of units and eventually he couldn't afford them and it decimated his economy. Easy win.

I played as a halfling rogue and won super easy against multiple computers on hardmode.

The main problem as I see it is the AI is just too dumb, if you put defenders on hard they can't even beat themselves, sad panda.

Anyway thanks for the mod keep up the good work!

Gary Dec 6, 2021 @ 11:00am
I'll let you know after another game. Thx. Pretty sure they reached champ level but I'll get screenshots if I can confirm it.

@Arcaneshield: yes it should show under the "User Content" tab in the launcher, check the box and then it will be used.

@CakeOfDoom: the balance mod does not boost gold for Warlord or Orc, so it's rather the base game which allows that. Warlord has bonuses for cities' income and lower upkeep for units so I'd say it's normal.

@Gary: very weird. Would you have screenshots? Maybe report there: https://steamcommunity.com/workshop/filedetails/discussion/661597466/1473096694444800992/ Only Serpents and Spiders evolve, not Penguins, Boars, etc. Also, you're aware with the mod the Evolve occurs only at Champion I and not at Elite (as displayed in the unit panel)?

Gary Nov 13, 2021 @ 11:12am
Hi, just played a druid game and none of my animals would evolve. The only other mods I have are clothes and extra heroes. FYI cheers.

Lt. Ruben (AUT) Sep 11, 2021 @ 4:58am
Is it just me or does this mod make you have way too much gold? i have a warlord orc campaign and with 2 cities i was able to have multiple full stacks and still gold to spare. Every city can support like 3 or 4 fullstacks of hero+ 5xT2/T3 units.

Arcaneshield Aug 22, 2021 @ 1:18pm
Does this mod show up under user content? I've subscribed and launched the game several times and it says I have no mods.

@JJsmall: yes, it's normal, see the changelog: https://docs.google.com/document/d/1jgwAg70dwNm8i3nFJqt8hrnwpNmxudn2aSXuvDet-5w/edit Force Field Generator Gear is a stack buff (that's different from the spell), as it's a (relatively) high level ability.