Store Page
Total War: ATTILA>  Workshop > [ESP] Lucio Boreno's Workshop
This item has been removed from the community because it violates Steam Community & Content Guidelines. It is only visible to you. If you believe your item has been removed by mistake, please contact Steam Support.
This item is incompatible with Total War: ATTILA. Please see the instructions page for reasons why this item might not work within Total War: ATTILA.
Current visibility: Hidden
This item will only be visible to you, admins, and anyone marked as a creator.
Current visibility: Friends-only
This item will only be visible in searches to you, your friends, and admins. 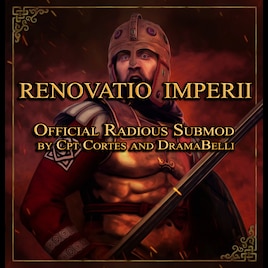 [ESP] Lucio Boreno
Offline
See all 647 collections (some may be hidden)
You need DLC to use this item.

This item has been added to your Subscriptions. Some games will require you to relaunch them before the item will be downloaded.
Description
Renovatio Imperii is arrived to its last phase and now it reaches the definitive status of Radious Official Submod.

Purpose of this mod is to offer you an high quality selection of units historically existed and serving under the imperial armies, especially during the Belisarius' timeframe.
Cortes planned these units trying to offer a large variety of units and DramaBelli tried to realise them in respect of history but also taking care of players' need of variety, also trying to avoid clones with different shields and names plus the abuse of abused vanilla stuffs.

It brings you 26 new units searched and planned by Cpt Cortes, who also created DB structures and realised by DramaBelli, who created all visuals mixing old and new textures made exclusively for these units.
Final balancement made by Radious, who checked the mod to assure you a 100% compatibility with main mod mechanics.

Cpt Cortes made 21 of these units available for Roman Expeditionary Corp and Byzantine Empire in the Last Roman Campaign DLC. Other 5 units are exclusively available for the Eastern Roma Empire in the Grand Campaign.
They come with unique cards made by DramaBelli and adapted to Radious style by Great Black Jaguar.

An exclusive AOR system mod (regional recruitment) is separately offered by Cpt Cortes to have each unit recruitable in its (the more possible)historical region of the map; and yes, it is compatible with Swiss Halberdier's AOR mod.

In that thread you will find pictures for each unit included in the mod.

Here you have a little AOR addon. All unit have a historically assigned region where they were in these years. BUT this AOR will work ONLY if you have settlements, if you are in expedition/horde mode, you'll be able to recruit all units in every region. As soon as you take a settlement (for you, not for ERE) AOR will start to work. This addon need a new campaign in order to work. Is totally compatible with the official AOR mod by Swiss. So much thanks to our mate Swiss to create his community AOR map!!

Install instrucctions for non steam link, download and unzip, place both .pack and .png files in your data folder (C:\Program Files (x86)\Steam\SteamApps\common\Total War Attila\data in windows 7) and load this mod AFTER the main Renovatio Imperii mod.

Ernst von Jacob: historical research and visual inputs
Swiss Halberdier: very friendly help, massive support and contribute with his AOR community map
Avetis : for the model of his helmet with and without chainmail he gave me for one of my Rome II units (thank'u, DramaBelli)
EvilEwok: dear and little testing support (By Cpt Cortes)
Great Black Jaguar:for having adapted cards to Radious Style
Radious: for final checking and balancements to make this mod "official"
Silent Resident: for her nice choco-Logo
My dear and little EvilEwok for testing and support.

rhinojmc Jul 16, 2021 @ 4:54am
It says it's outdated, I can't tell if it's working or not but I don't see any specialized units or what looks like units this mod would provide. Please help/update

Frosted Vert May 23, 2021 @ 4:45pm
I have been periodically checking the workshop for years, hoping for an update to Attila mods, something in the vein of DeI for Rome II.

I studied Late Antiquity in grad school. Every time I am picking my way through the Cambridge Ancient or Medieval encyclopedias, or a 600 page book by Brown, Cameron or Mills, I wish I could unwind by playing a deeply detailed TW Attila mod. lol My supervisor would probably write you an angry letter if he knew this is why I was so distracted. Job very well done.

As a historian, and fan of the series it sometimes feels CA has left behind for the Chinese market and Warhammer IP, thank you. I can tell this was a labour of love and I want you to know how appreciated it is.