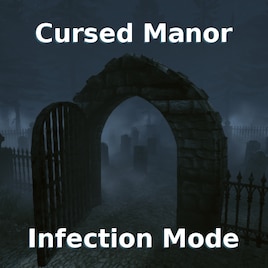 ❊Eggplant
Offline
See all 37 collections (some may be hidden)

This item has been added to your Subscriptions. Some games will require you to relaunch them before the item will be downloaded.
Description
Cursed Manor is the first in a series of maps inspired by 'Infection' or 'Zombie' game modes seen in a few other games.

All players initially start out on one team except for one player who is on the undead team. Whenever a player on the living team is slain, they will automatically join the undead team. Living players start out unarmed but weapons and armor will spawn at random locations within the castle for them to find. The game continues until there are no players remaining on the living team or enough time has passed since the last slaying.

Note: This is NOT a mod. It is a custom map and it does not require any mods to run.


Special thanks to Big Beans for providing sound effects and the item pickup particle effect.

v1.1.2 (09/26/2016)
- Mithril armor will spawn sooner.
- Added blood splatter to skeletons.
- The first undead's position will be passed onto another undead player in event of a disconnect.

v1.1 (02/05/2016)
- The round timer is now displayed at the top of the screen.
- The timer has been reduced significantly for the later stages of the round. Now decreases down to 90 seconds at the lowest (at 85% players slain).
- After 75% of the living players have been slain, the remaining living players will become overwhelmed with fear and begin babbling against their will.
- Changed mark of the curse to activate at 15 seconds remaining.
- The 3rd round will be skipped if the map has been played for over 22 minutes.
- Replaced Cudgel pickup with Halberd.
- Fixed a stuck spot in the dark room.
- Minor changes to the castle.

v1.0 (10/23/2015)
- Enrage will drain the first undead's health much more rapidly after a kill has been scored.
- Slightly reduced undead damage resistances.
- Leather and Mithril armor give a 35% damage bonus to backstabs.
- Scale Mail gives a 17% damage bonus to backstabs.
- Added small increase to initial weapon spawns based on the number of living players.
- The round will restart if all undead players leave the game.
- Fixed stuttering at the start of the first round.
- Fixed the first undead's battle cry sometimes displaying incorrect player count.
- Fixed curse timer resetting when a living player leaves the game.
- Fixed ballistas keeping the player in the level after the end of a round.

Beta v0.2 (09/05/2015)
- Slightly increased amount of armor spawned per slain player.
- Increased maximum weapon and armor spawns.
- Increased peasant damage resistances. Greatsword must now hit the head to get a one-shot kill.
- Reduced undead pierce resistance.
- Increased undead movement speed. (Does not apply to the first undead)
- If less than 40% of the living players have been slain, undead will spawn with slightly increased HP and a different set of weapons. (Does not apply to

the first undead)
- Enrage is now activated with the Use button instead of Battle Cry.
- Added extra spookiness to first undead's weapons.

Beta v0.1 (08/30/2015)
- Increased amount of weapons and armor spawned per slain player.
- Increased maximum weapon and armor spawns.
- Slightly increased peasant, leather, and scale mail resistances.
- Replaced pickup particle effect with a better one (thanks Big Beans).
- Living players will start out with daggers if the server population is 6 or less.
- Replaced first undead's Claymore with a Greatsword.
- First undead can enrage if less than 40% of the living players have been slain and the timer drops below 120 seconds.
- Initial spawns are now delayed to ensure the first undead and living players spawn at the same time.
- Lifeforce Sense becomes more frequent based on the amount of time remaining and the amount of living players remaining.
- Healing is available in the throne room after half the living players have been slain.
- Nerfed the pipes at the top level of the castle.

Best time to play on the server(s) with this map?
Zombie
< >
59 Comments

TEZ Apr 2, 2016 @ 5:30pm
Played this map the other day. It's fun to jump onto the chandeliers. I'm very impressed with your map making skills Egg.

❊Eggplant  [author] Feb 17, 2016 @ 12:27pm
@S0ldier
The mark was changed to trigger at 15 seconds remaining instead of 30. From what I've seen so far, that's been short enough that the marked player is able to survive more often than not. The babbling makes things harder, but the timer is also significantly shorter than it used to be for that phase of the round, so you don't have to stay hidden for as long. The babbling also has a much shorter radius than normal voice commands, so you have to be closer to hear it.

I may tweak it some more after further testing, but so far I'm seeing the living team win more often than they used to because of these changes.

F.A. Hayek Feb 17, 2016 @ 8:12am
That new babbling thing makes it even harder to survive. Undeads already had an OP advantage during the last 30 seconds (curse marking).

❊Eggplant  [author] Nov 15, 2015 @ 5:56pm
It would still be too big of a focus on projectiles. I don't want the living team players to be getting killed regularly by unblockable attacks, which IMO would be incredibly frustrating when it means the end to your one life on the living team. The first undead spawns with throwing axes, but he's the only exception to the rule.

Nobody Nov 15, 2015 @ 5:44pm
Maybe not slings but throwing axes / knifes should be a better choice for undeads. No ammo crates but they can refill by spawning only.

❊Eggplant  [author] Nov 15, 2015 @ 5:38pm
Giving the undead slings would turn the mode into nothing but archer vs archer battles, which I absolutely don't want to happen.

Nobody Nov 15, 2015 @ 4:53pm
Hey, I wonder if you have considered allowing undeads to have slings because It gets annoying to deal with campers at certain spots in Ruins.