Store Page
Arma 3 >  Workshop > Ryan's Workshop
This item has been removed from the community because it violates Steam Community & Content Guidelines. It is only visible to you. If you believe your item has been removed by mistake, please contact Steam Support.
This item is incompatible with Arma 3. Please see the instructions page for reasons why this item might not work within Arma 3.
Current visibility: Hidden
This item will only be visible to you, admins, and anyone marked as a creator.
Current visibility: Friends-only
This item will only be visible in searches to you, your friends, and admins. 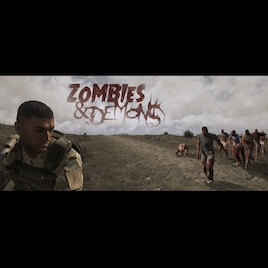 Sanchez
Offline
See all 22576 collections (some may be hidden)

- The permissions above can be given on a case by case basis and the reasons to give permission may vary per request.
Popular Discussions View All (238)

how do i start the mod?
TTV ImToxicSmoke (AFO)

mubby Jan 21 @ 11:21pm
Hello! I am the owner of a large and active Exile community called Finders Keepers. We have loved and used this mod for years on our server and now we are hoping that you will allow us to further customize it by including/updating it within our server mod (found here: https://steamcommunity.com/sharedfiles/filedetails/?id=2088837210) . We recently made our own custom zombie spawning system to replace ExileZ and now we would like to build a custom FSM brain to manage our zombies as well as explore new features/fix a few bugs we've come across. We can manage all of this on our own and shouldn't need any support from any of the authors. Credit will obviously be given to all of the mod authors and we can also include this mod as a dependency if needed. Do we have your permission to proceed? If there are any questions, please ask and I will gladly answer. :)

[CF] Sir Drevden Jan 9 @ 10:11pm
So im doing a mission tonight with my group and wanted to put some other clothes on to make the zombies fit with the theme of the area. But everytime i put on any other clothes they won't move from the spot i put them in. It's like the modded clothes is stopping them from moving. Is the a way to fix this or do i have to try to re write the story abit.

SVaughan Nov 6, 2022 @ 5:00am
@mboracin14
I think infection is a server/mission setting. Otherwise, one could pair it up with Devourerkings Necroplague which does have infections.
I forgot what the default infection timer is set to, but if a Zombie hits you or anything, a infection timer does trigger and given a certain period of time your character of whatever was infected will drop dead for a minute or two before reanimating into a zombie.