Store Page
Dota 2 >  Workshop > Firetoad's Workshop
This item has been removed from the community because it violates Steam Community & Content Guidelines. It is only visible to you. If you believe your item has been removed by mistake, please contact Steam Support.
This item is incompatible with Dota 2. Please see the instructions page for reasons why this item might not work within Dota 2.
Current visibility: Hidden
This item will only be visible to you, admins, and anyone marked as a creator.
Current visibility: Friends-only
This item will only be visible in searches to you, your friends, and admins. 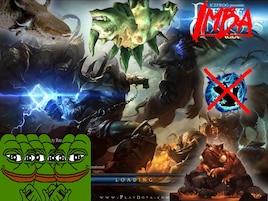 Hewdraw
Offline
See all 327 collections (some may be hidden)

This item has been added to your Subscriptions. Some games will require you to relaunch them before the item will be downloaded.
Description
Dota IMBA is the answer to the question: what would happen if every hero received nothing but buffs for 100 patches straight?

Stupidly overpowered heroes? Speed-of-light DBZ-esque fights? Insane abilities which make no sense? IMBA has it all! Come check it out.

# Enjoyed the game and want to support us as developers?

Pledge on the IMBA Patreon[www.patreon.com]

# Terrain mutators:
- Airdrop: Gifts are deployed around the map every 2 minutes.
- River Flows: The river flows. Movement speed greatly increased on the water.
- Wormhole: Wormholes spawn on the map. Activating one will bring you to another random wormhole.
- Tug of War: Spawns a big BOB (warlock golem) on the mid lane. Every time BOB dies, he comes back stronger (more HP/damage) and he switches to the opposite team. Inspired from bob wars (created by ArcTangent)
- Super Runes: Runes are unusually effective.

Stay up to date, learn about the game and share your ideas on our Official Website[www.dota2imba.fr]. You can also use the Issues section on Github[github.com]

Dota IMBA is based on the original Warcraft III map by Mimiya, which you can download here[www.dota-utilities.com]. This mod was made with the authorization of Mimiya.