Store Page
Arma 3 >  Workshop > Karl's Workshop
This item has been removed from the community because it violates Steam Community & Content Guidelines. It is only visible to you. If you believe your item has been removed by mistake, please contact Steam Support.
This item is incompatible with Arma 3. Please see the instructions page for reasons why this item might not work within Arma 3.
Current visibility: Hidden
This item will only be visible to you, admins, and anyone marked as a creator.
Current visibility: Friends-only
This item will only be visible in searches to you, your friends, and admins. 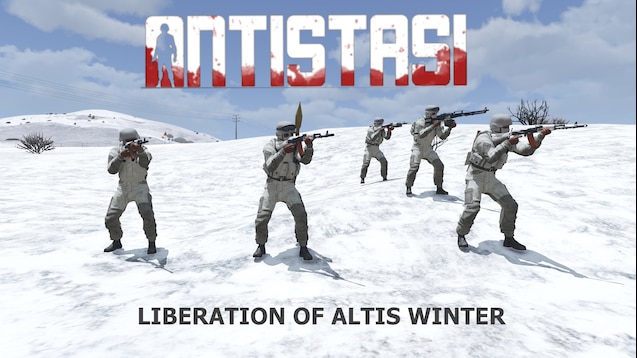 Karl
Offline
See all 3 collections (some may be hidden)

This item has been added to your Subscriptions. Some games will require you to relaunch them before the item will be downloaded.
Description
Antistasi Features
- Playable in MP and persistent open server MP.
- Capture an island in a war against either one or two enemies at the same time, which might even fight each other.
- Dynamic agression system which is changing enemy reactions based on your actions. The system is influenced by basically everything you do like kills, completing missions, taking flags and even shooting civilians and POWs. So take care regarding what you do and who you kill!
- Persistant war in all aspects, destruction stays the same way as well as your vehicles and garrisons.
- Compatible with not only the original Arma 3 maps but also others from the steam workshop like Anizay and Chernarus. More to follow!
- Advanced AI system, the enemy and your friends will heal wounded or downed units, cover themselves and use multiple other tactics to win against their foes.
- Currently 15 different side missions: Assassination, Logistics, Destroy Assets, Rescue POWS, Conquer Missions with a wide variety for each type.
- Possibility of Undercovered approaches - utilize that to position yourself for the perfect attack.
- Persistent Stat Save System: You won't lose game or server progress upon a game update.
- Enhanced AI Squadmate control.
- AI friendlies and enemy can drag/carry and heal injured soldiers, not working with ACE3 mod.
- AI Garrisons that use static weapon you add.
- Supports up to 3 Headless Clients.
- Integrated Mods: TFAR, ACRE, RHS: AFRF, USAF and GREF, 3CB, GRAD Trenches, ACE or, to keep the unique features of AI that would be disabled with ACE medical system: ACE no medical. None of them mandatory.

Discord server where I host my own antistasi server: https://discord.hamptergaming.xyz
< >
7 Comments

Skarris Dei Ignis Jun 9 @ 12:48pm
Does this need some other mod(s)? See winter camo in the screenshot but dunno if you use something specific.

[RIP] Hellstorm901 Feb 2 @ 3:56pm
Is there any chance of an Antistasi Plus version being made?